Just days after California started selling recreational marijuana to anyone over the age of 21, Attorney General Jeff Sessions has announced plans to rescind policies that have allowed states to circumvent federal laws and legalize the drug.  According to the Associated Press, the move by Sessions will require U.S. attorneys where pot is legal to decide whether to aggressively enforce federal marijuana law.

That’s according to two people with direct knowledge of the decision. They were not allowed to publicly discuss it before an announcement expected Thursday and spoke on condition of anonymity.

The move will leave it to U.S. attorneys where pot is legal to decide whether to aggressively enforce federal marijuana law. The move likely will add to confusion about whether it’s OK to grow, buy or use marijuana in states where it’s legal, since long-standing federal law prohibits it. 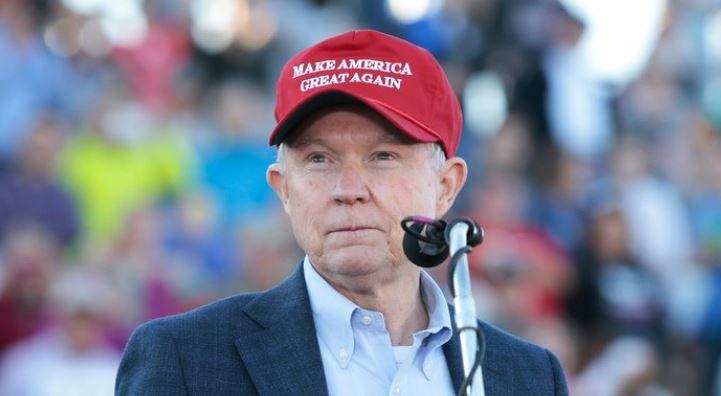 This is not great news for the folks that have plowed roughly $158 million into the weed ETF over the past week. Following the report, pot stocks have tumbled on sudden crackdown fears.

The U.S.-listed ETFMG Alternative Harvest ETF , which began trading on Dec. 26, has risen to $164-million in net assets from $6-million in one week 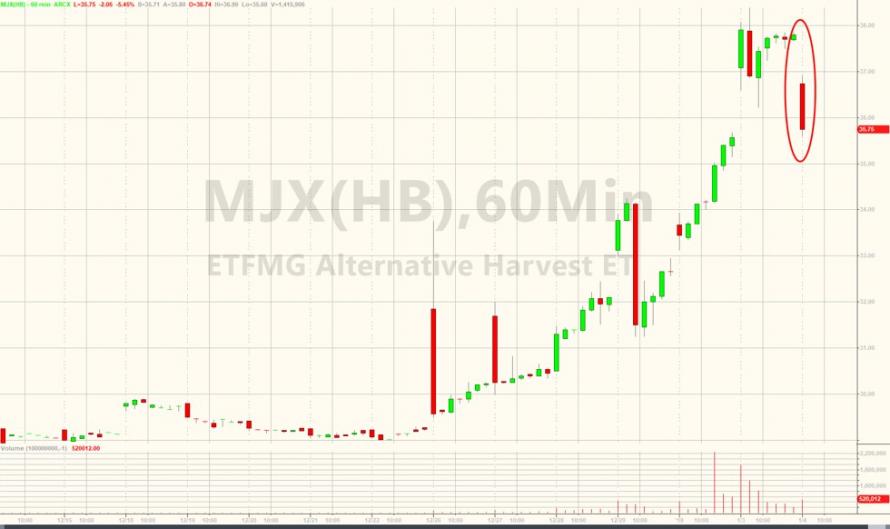 For those who missed it, below is some background on the weed laws in California and other states around the country.

A long-awaited law in California kicked in today allowing anyone 21 and older to purchase marijuana at licensed shops, grow up to six pot plants at home and possess up to an ounce (28 grams) of the drug - joining Colorado, Oregon and Nevada's expansion into recreational use by adults.

Opponents say the law will encourage gateway drug use and lead to higher DUI rates.

Californians voted on the legislation in November, 2016, which has paved the way for around 90 licensed retailers - concentrated mostly in San Diego, Santa Cruz, Silicon Valley and Palm Springs.

“It’s been so long since others and myself could walk into a place where you could feel safe and secure and be able to get something that was good without having to go to the back alley,” Jeff Deakin, 66, who waited in Oakland with his wife, Mary, and their dog all night for Harborside dispensary to open at 6 a.m told the USA Today. “This is kind of a big deal for everybody."

Los Angeles and San Francisco, however, was unable to sort out local regulations in time to start issuing licences to local pot sellers, while Bakersfield, Fresno and Riverside have adopted laws forbidding recreational marijuana sales. The San Diego Union-Tribune estimates that over 70% of California cities have banned either the sale or cultivation of cannabis.

In late December, Los Angeles officials announced that they would not begin accepting license applications to sell recreational marijuana until Jan. 3, and it may take several weeks before licenses are issued. Meanwhile, lawyers advising medical dispensaries who wish to also sell recreational marijuana have advised businesses to continue to sell pot as "collectives" until local and state licenses are secured, according to Jarred Kiloh of the United Cannabis Business Association. There are around 1,000 existing medical marijuana dispensaries statewide.

The new pot laws include several specific provisions governing its use; no smoking pot in public areas or anywhere cigarettes aren't allowed, while traffic laws prohibit marijuana use in vehicles - smoked or ingested, even riding as a passenger.

Cannabis cannot be sold before 6 a.m. or after 10 p.m., and diespensaries and similar busineses can't operate within 600 feet of any school - and must maintain 24-hour surveillance for security reasons.

California is also imposing a 15% levy on all pot sales, including medical pot products - while local governments are piling new taxes on top of the statewide levy - which could result in a 70% increase in the price of marijuana. In Oakland, for example, taxes for most customers will increase from 14.25% to 34.25%. The state estimates an increase in annual tax revenue of $1 billion from the legal adult-use marijuana industry, which itself is expected to have a projected value of $7 billion.

In order to collect $1 billion a year in taxes, the state will need to reach a projected $7 billion in annual legal recreational cannabis sales. (California residents already reportedly spend that much on marijuana annually, but most of it is still on the black market.) At that rate, California would easily be the country’s largest legal marijuana market, as the entire legal cannabis industry in the U.S. is expected to pull in roughly $10 billion in total sales for 2017. That number would almost certainly get a boost in the coming years, as legal markets grow in California and other states, such as Nevada (where legal recreational marijuana sales kicked off over the summer) and Massachusetts (where the adult-use market is expected to open in July 2018).

In anticipation of the new law going into effect, Jack in the box Inc. has partnered with a digital media company backed by Snoop Dogg to bring back their "munchie meal."

The “Merry Munchie Meal” will be available at three California locations for a week in January. Its price is an elbow-in-the-ribs $4.20, also the time of the day notorious for smokers to light up. The meal features two tacos, french fries, onion rings, five mini churros, three chicken strips and a small drink. -Deadline

Here's a 2014 promotion for the pot-themed meal:

Meanwhile, grandmas across the state can rejoice and partake of cannabis without worrying about getting busted by the fuzz.