In his latest letter to clients, which we discussed yesterday, GMO's Jeremy Grantham found himself defending two irreconcilable contradictions: ever the value investor, Grantham readily admitted that the market has never been more overvalued and thus hardly an attractive investing proposition; at the same time, the investing legend also conceded that stocks are on the verge of a "late bubble surge" melt-up, and as a result the upside from here before the next crash could be as much as 60% during the final phase of the current bubble. 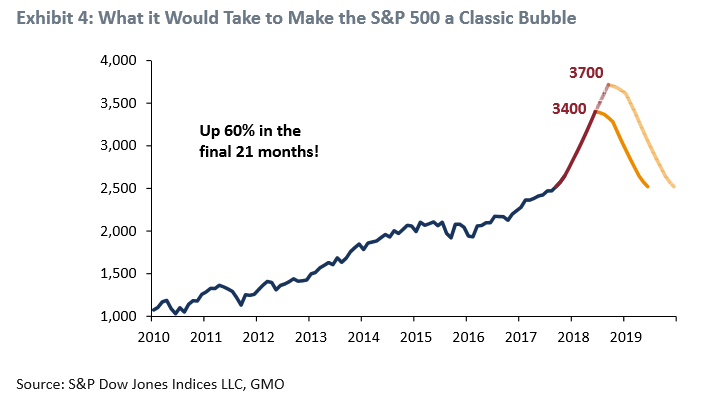 Of course, for someone who is actively and professionally managing money, Grantham - like so many of his peers - had no choice but to admit the gaping cognitive dissonance that results from investing in the current "market", where one can avoid participating and see their AUM withdrawan promptly, or one can, in the immortal words of Chuck Prince, continue dancing as long as the music plays.

But how to determine if, after nearly nine years of constant market levitation, the music is finally dying down? Conveniently, Grantham also presented his favorite indicator which allows him to determine if "market momentum is increasing to a frenzy" - the acceleration of price, or said otherwise, the non-stop surge that accompanies the final melt-up.

This is how Grantham laid it out:

On the topic of classic bubbles, I have long shown Exhibits 1 and 2. They recognize the importance of a true psychological event of momentum increasing to a frenzy. That is to say, acceleration of price. The average time of the final bubble phase of the great equity bubbles shown in Exhibit 1 is just under 3.5 years, with the average upcycle of real acceleration just 21 months. And the two smaller equity bubbles had gains of 65% and 58%. 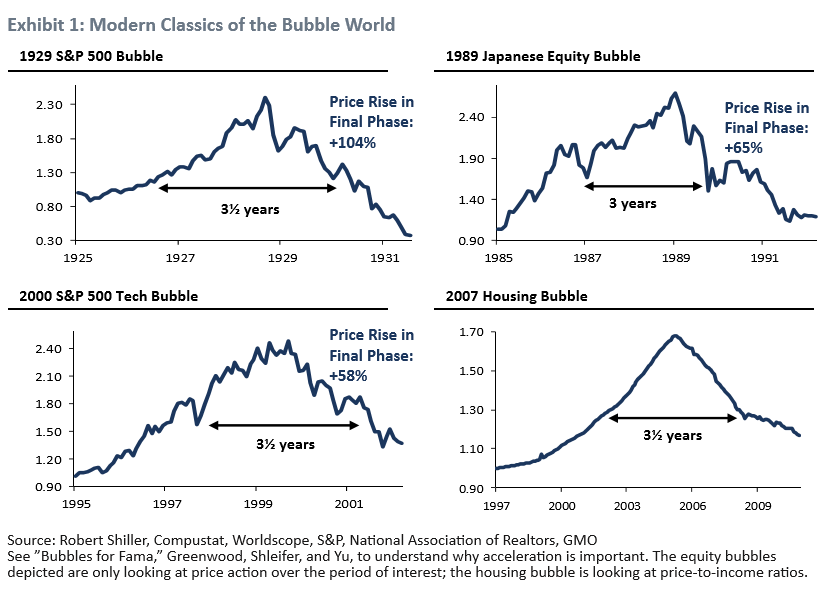 They also show an interesting symmetry, don’t you think? Rising and falling at about the same rate, as did the real McCoy – the South Sea Bubble shown in Exhibit 2 – before them. Yes, there is a real danger of being late. And in general, average market declines are considerably faster than average advances. But historically, when dealing with real bubbles, being late has not been materially different in time and pain than being too early, as you can see. Value managers are historically painfully too early over and over again, as I know better than most. 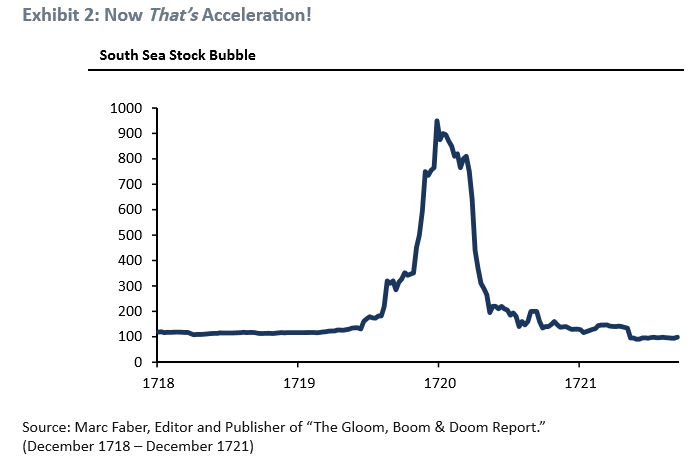 Grantham then doubles down by citing a recent academic paper titled "Bubbles for Fama" which concluded that in the US and almost all global markets, "the strongest indicator – stronger than pure pricing or value – was indeed price acceleration."

But if upward acceleration is indeed the best bubble indicator, then there is a problem, because as we discussed earlier today when we commented on the Dow's move above 25,000 for the first time ever, the broader market is approaching exponential "speed" to the upside.

Commenting on the move, the WSJ notes that the most recent 1,000-point rally for the blue-chip index was still a notable run. 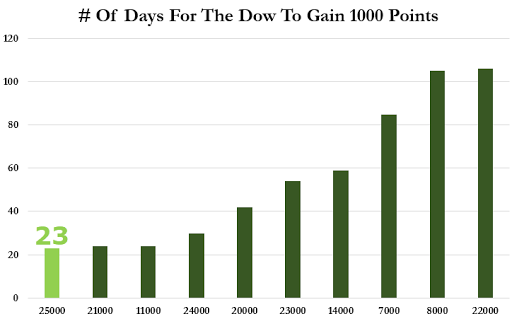 However, no matter if one looks at the move on a relative or absolute basis, a clear sign of just how relentless and rapid the market's recent upward acceleration has been is that the Dow’s latest 5,000-point run - which started roughly around the time 2017 rolled in, shortly after Trump's election - was more than three times quicker than its 844-day rally to 10,000. In fact, it will have taken the equity index only 238 sessions to advance from 20000 in January 2017 to 25000 Thursday.

Said otherwise, if upward acceleration in the market is a bubble warning alert, then Grantham better be batting down the hatches.

To be sure, in addition to upward acceleration, Grantham laid out several other indicators, all of which we touched upon yesterday, and all of which have been triggered in the current market, however he left his favorite indicator for last:

Keep an eye on what the TVs at lunchtime eateries are showing. When most have talking heads yammering about Amazon, Tencent, and Bitcoin and not Patriot replays – just as late 1999 featured the latest in Pets.com – we are probably down to the last few months.

We may well be, in which case the only question is whether the bubble bursts before the mid-term elections or after. Here's why it matters, from Grantham's conclusion: "Living in a hyper-political era, I should mention that if my best guesses are correct, a near-term meltup would obviously help the current administration at mid-term, just as the subsequent and highly probable melt-down would seriously hurt it."

Finally, regarding what lunchtime eateries are showing, here is the answer:

I'm at a restaurant that has CNBC on the TV like it's the 1990's or something pic.twitter.com/1LwetnI5rR