The Amazon juggernaut continues to crush brick and mortar retailers.

On Thursday morning, former retail giant Macy's, announced that was preparing to fire 5,000 job cuts, including closure of seven previously unidentified stores and other cuts at remaining locations, as it seeks stability in a tumultuous climate for "physical retail." The retailer's cost reductions come as it announced that its comparable holiday sales rose a modest 1.1% for the Nov/Dec period relative to 2016.

And while Macy's continues to struggle with margin compression and inventory (mis)management, clearly the far bigger problem is the secular decline for the company (thank you Amazon) with Macy's today announcing it was closing 11 stores in FY19 (year ending Jan. 2019), vs the 4 announced previously, part and parcel with the 5,000 laoffs, as well as the company's intentions to "further streamline some non-store functions."

Macy's disclosed the following seven locations for shuttering which it had previously not identified for closure:

The retailer also said Thursday it is moving ahead with four other store closures previously announced:

Putting the closures in context, they are are part of a plan announced in August 2016 to shutter 100 stores. Altogether, the company has now revealed 81 of the 100 locations.  Macy's sees closing an additional 19 stores as leases or operating covenants expire or sale transactions are completed. Including the stores announced today, M has closed 124 stores since 2015.

Macy's ongoing woes are good news for bargain hunters: the company said that liquidation sales are likely to begin Jan. 8 and continue for eight to 12 weeks.

"Looking ahead to 2018, we are focused on continuous improvement and will take the necessary steps to move faster, execute more effectively and allocate resources to invest in growth," Macy's CEO Jeff Gennette said in a statement.

Macy's has been struggling with its massive real estate footprint and traditional retail model, as Amazon.com soars and physical competitors such as treasure-hunt retailers T.J. Maxx and Marshall's offer (better and cheaper) alternatives. Despite the challenges, Macy's reported strong performances for active apparel, beauty products, shoes, dresses, coats, fine jewelry and some other items.

Ironically, the company also said its digital sales jumped by double digits. The problem is that when compared with Amazon's own same store sales - all digital of course - it is too little, too late.

But what is most troubling for Macy's, is the stock's reaction to today's news: whereas in the past, M would jump on any mass layoff and/or closure news, this time it enjoyed a brief kneejerk moment in the green, before tumbling. 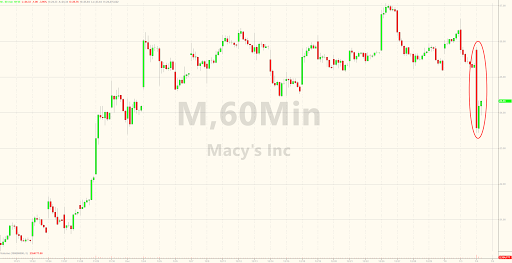