Over the past several years, we've written a countless number of posts on the precarious financial situation of numerous state and local public pensions around the country all while frustratingly wondering how the massive $3-$6 trillion dollar ticking time bomb doesn't seem to be that much of a concern to frothy asset markets.  As it turns out, precisely no one (our readers excluded, of course), including the workers who are active participants in insolvent public pension ponzi schemes, have any idea just how underfunded they really are.

According to a staggering new survey conducted by Spectrem Group, 6 out of 10 CalPERS retirees and 8 out of 10 NYC retirees are apparently under the illusion that their pensions are fully funded...

...and that's a survey of the people who are actually owed money by these ponzi schemes...which means that the general population working in the private sector has no clue whatsoever that underfunded pensions could literally result in a complete, global economic crisis at some point over the next 10-20 years.

Of course, as this one simple map illustrates, reality is somewhat different than the hopes and dreams of America's public pensioners.  In fact, when using realistic discount rates, there is only 1 state pension system in the entire country, Wisconsin, that is more than 50% funded....all the others are trillions of dollars short.

Meanwhile, some 85% of pensioners are also convinced that their pension boards are minting cash in the current Yellen-induced equity bubble... 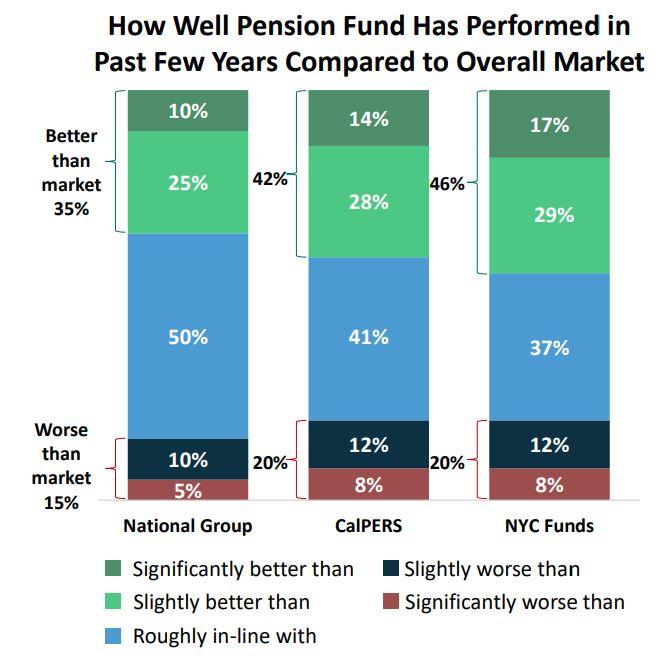 ...but, as we've noted, that too is simply not the case as CalPERS managed to return about 3% over 2015 and 2016 combined as their funding ratio continued to sink.

Meanwhile, for those who have managed to at least educate themselves enough to know that their pension is underfunded, roughly two-thirds say they're not "very concerned" and figure it will all just work itself out naturally...maybe via the pension fairy?

For National pension members, their level of concern is 70% while CalPERS and NYC Funds members both expressed a higher average level of concern (76%). Previously, many pension members identified themselves as moderately well-informed about the actual investment returns and target investment returns of their fund. Upon further questioning, however, many pensioners’ beliefs about fund performance were more optimistic than the actual performance of the fund. Similarly, when pension members were questioned regarding the funding levels of their pension funds, the largest numbers of pensioners indicated that their pension fund was fully funded, despite the fact that none of the funds are fully funded. For those who understood that their pension was underfunded, they expressed concern regarding their own ability to collect their pension in the future. 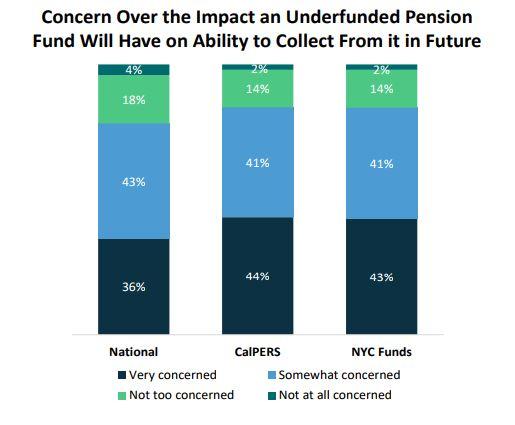 Luckily, the responses weren't all bad...at least 80-89% of respondents said their pension boards should focus on making money and not advancing social or political causes... 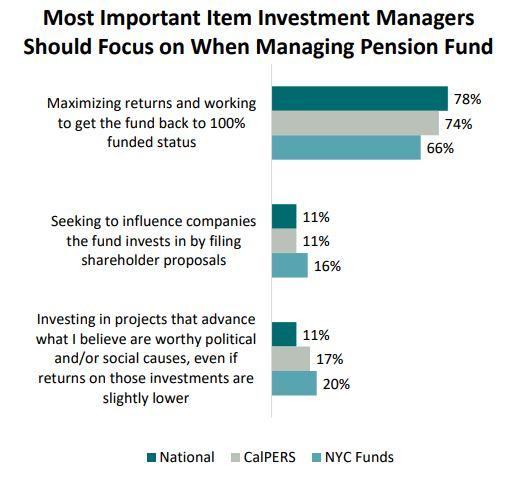