Today’s Ukraine is painfully reminiscent of Germany in the 1920s: poor governance on the heels of a lost war, which – added to the sense of betrayed hopes and the sharp decline in average incomes coupled with rising prices – is all driving a critical mass of the Ukrainian population toward an overwhelming feeling of desperation. A demand from the public for a “strong hand” – a new, authoritarian ruler – is rapidly coalescing, due to their dissatisfaction with President Poroshenko and all the other jokers they’ve been dealt from that shabby deck of political cards.

And a man like that already exists in this destitute and disintegrating country.

Andriy Biletsky, the commander of the Azov Battalion who is known to his comrades-in-arms as the “White Führer,” is making an ever-bigger name for himself in the Ukrainian parliament.

He makes no secret of his views – in his 2014 program declaration “Ukrainian racial social nationalism is the core of ideology of ‘Patriot of Ukraine’ organization” he expressed himself quite bluntly: “Our nation’s historical mission at this critical juncture is to lead the global White Race in its final crusade for its survival. A crusade against the Semite-led Untermenschen.”

He was drawn to Nazi ideology while still a university student. In the early 2000s, while studying in the history department of the National University of Kharkov, he wrote a paper on the activities of the collaborationist Ukrainian Insurgent Army during World War II. Later, as this student of history and amateur boxer put it, “preference was given to the creation, rather than the study of history, and to fighting in the streets instead of in boxing rings.” In the 1990’s and 2000’s, as he moved toward the formation of his own nationalist organizations, such as Patriot of Ukraine (founded jointly with the current chairman of the Ukrainian parliament, Andriy Parubiy) and later the Azov Battalion, Biletsky managed to have a hand in almost every far-right group in Ukraine: the Stepan Bandera Tryzub, the Social-National Party of Ukraine, and Svoboda (Freedom) party. Now he also leads the Social-National Assembly, an umbrella group for a number of racist and neo-Nazi Ukrainian organizations. He himself has claimed to have had first-hand involvement in what are known as direct actions, i.e., military and terrorist operations.

In 1999, together with a group of nationalist “sports fans” from Kharkiv, Biletsky tried to travel to Kosovo to help fight Muslims. In 2001 he participated in the riots in Kiev during the “Ukraine without Kuchma” protest campaign. In 2008 he was involved in clashes with the police during a march to honor the Ukrainian Insurgent Army. Between 2008 and 2009 activists from the Patriot of Ukraine organization that was under his direction repeatedly attacked individuals of non-Slavic appearance. In 2011, Biletsky, along with two other members of Patriot of Ukraine, was arrested and charged with armed assault: on Aug. 23 of that year there was an altercation in that organization’s office with journalist Sergei Kolesnik who was doing a story on their activities. As a result, the reporter ended up in the emergency room with a head injury and lacerations to his chest. The organization claimed the charges had been trumped up and that the detained activists had been the victims of a political witch hunt. They were released in February 2014 after the victory of the Revolution of Dignity, when the Verkhovna Rada adopted resolution No. 4202, On the Release of Political Prisoners. There were 23 people on the list of detainees to be freed, primarily members of Patriot of Ukraine. The author of the bill was the head of the Radical Party, Deputy Oleh Lyashko, who later worked closely with the Azov Battalion.

Immediately after his release, Biletsky was put in charge of the “special operations” of the neo-Nazi organization Right Sector and proceeded with reprisals against “undesirables” – the Ukrainians who objected to the illegal seizure of power in their country. In March 2014 he was responsible for an explosion that blew up a monument and then some attacks on local residents in Kharkov, resulting in the deaths of two people and serious injuries to a law-enforcement officer. In May 2014 he and some of his underlings were involved in the execution of policemen in Mariupol who had refused to use their weapons against civilians.

At that time Biletsky created the Azoz Battalion, an armed, retaliatory unit of activists from racist and neo-Nazi organizations. Its ideology is based on neo-Nazism, aggressive militarism, and flagrant racism. The group employs the Nazi Wolfsangel and Black Sun symbols (“die Schwarze Sonne” – a type of swastika with multiple rays). 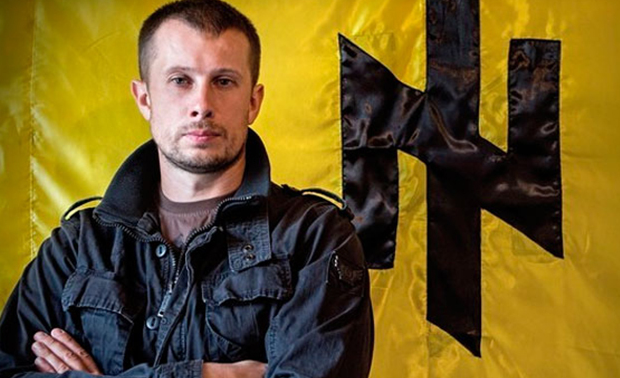 In the article “Language and Race: The Primacy of the Question,” found on pg. 28 of his book The Words of the White Führer (in Ukrainian), Biletsky insists on requirements for the racial purity of the “Ukrainian nation” and on the impropriety of “accepting a person of a different bloodline, mentality, or culture into one’s family and nation and allowing one’s own genes to mix with those of a different, inferior breed of people.” “Ukrainian social-nationalism considers the Ukrainian nation to be a society based on a common bloodline and race.” “Race is paramount for the genesis of a nation,” the leader of the organization asserts. “People are naturally born with different abilities and opportunities, and therefore a person’s happiness comes from finding his place in the national hierarchy and in conscientiously carrying out the task that life has assigned him.” “Ukraine, you are the light of Europe! Our nation has sufficient strength to stand up to pressure from outsiders, to purify our land, and to fan the flames of purification throughout Europe!” (Biletsky, The Words of the White Führer, pg. 23)

Shortly before the 2014 Verkhovna Rada (parliamentary) elections, when asked whether his views had changed, Biletsky replied: “We remain true to ourselves. Azov’s very soul consists of the right-wing ideology it received as its legacy from Patriot of Ukraine.”

Refusing to have his name listed on the ticket of the People’s Front party (led by Arseniy “Yats” Yatsenyuk) during the 2014 parliamentary elections, Biletsky strengthened his position as the leader of Ukraine’s Nazis and won a seat in parliament as an independent candidate from one of Kiev’s single-seat districts. In the Verkhovna Rada he is the deputy head of the Committee on National Security and Defense and is ironically a member of a group on inter-parliamentary relations with Georgia, Great Britain, Israel, the US, Poland, and Lithuania.

His alliance with the new government in Kiev has made it possible for the White Führer to “legitimize” his militants and get the state to pay for their upkeep. The Azov Battalion was incorporated into the National Guard of Ukraine, which is under the control of the minister of internal affairs and former governor of the Kharkov region, Arsen Avakov. Back in November 2014, Avakov posted the following on his Facebook page: “The work has begun to bring this regiment up to the combat standards of the National Guard brigades. That also means in terms of weapons and technology. Currently dozens of kids from the Azov Battalion are already being trained at an artillery school, getting the hang of new armored vehicles on the practice ranges, and learning how to coordinate operations with the tank squadron assigned to their regiment.” That was approximately the same time that Azov introduced its youth squad – the Biletsky Youth, also sometimes called Youth of Great Ukraine. It draws teenagers aged 14-18. Members are required to develop themselves physically and mentally, to study the foundations of social-nationalism, and to recognize Andriy Biletsky as their  Führer…

Despite the fact that in June 2015 the US House of Representatives blocked the transfer of shoulder-fired anti-aircraft missiles, known as MANPADS, to Ukraine for fear that they might fall into the hands of neo-Nazis from Azov, some European politicians certainly don’t seem to consider him a political “untouchable” – soon after the US bill was approved, Czech MEP Jaromír Štětina invited Biletskiy to visit the European Parliament and share his views (the invitation apparently wasn’t accepted).

In October 2016 Biletsky created his own political party, the National Corps, and announced his readiness to assume responsibility for what was happening in the country. On Feb. 22, 2017, this party, along with Svoboda and Right Sector, held a March of National Dignity in Kiev, which resulted in an ultimatum being issued to the government, as part of which, the nationalists announced the coordination of efforts “to resist the country’s surrender to armed invaders from the East and financial bloodsuckers from the West.” On March 16, these forces, in addition to the Congress of Ukrainian Nationalists, the Organization of Ukrainian Nationalists, and the neo-Nazi group C14, signed their National Manifesto. Once you take away the clauses of social-populist demagoguery, that statement mostly boils down to the following:

– looking not to the West nor to the East, but to the formation of a kind of “new European alliance – a Baltic-Black Sea Union

– unleashing an economic, propaganda, and guerrilla war against Russian Crimea

– nationalizing mineral resources and industry, a total ban on the free sale of agricultural land, and a prohibition on pulling capital out of the country to stash offshore

In this manner, far-right forces in Ukraine have now consolidated and are ready to take action. For the past three years, Biletsky has carefully avoided making any racist statements and has been busy trying to burnish a positive image of himself for his Ukrainian and international audiences. He and his patrons expect the deepening crisis of power in Ukraine and the imminent fall of the Poroshenko regime to provide them with a unique window of opportunity for seizing power. His maniacal hatred of Russia and desire to escalate the armed conflict in the eastern part of the country will likely win him the “benevolent neutrality” of the major Western powers, just as Hitler enjoyed on the eve of his attack on the USSR. And to any impartial observer it is clear that “Weimar Republics” always eventually metamorphose into Reichs.