The U.S. rig count has been on the rise for months, despite some recent hiccups, but Canada’s rig count recently plunged amid low oil prices.

Canada’s rig count fell from 210 to 136 for the week ending on December 29, a massive drop off. That took the rig count to a six-month low. Obviously, the losses were concentrated in Alberta, where most of the rigs tend to be. Alberta’s rig count sank from 162 to 118 in the last week of 2017. But Saskatchewan also saw its rig count decimated—falling from 43 in mid-December to just three at the close of the year. 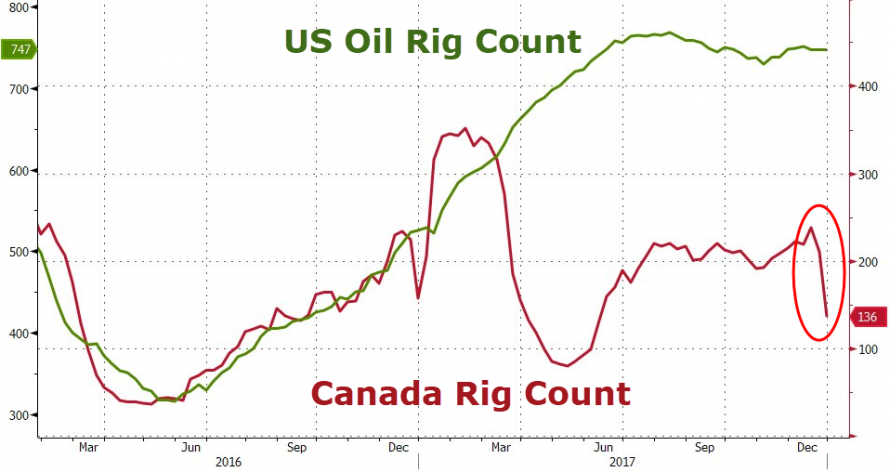 The losses can likely be chalked up to the meltdown in prices for Canadian oil. Western Canada Select (WCS), a benchmark that tracks heavy oil in Canada, often trades at a significant discount to oil prices in the United States. But the WCS-WTI discount became unusually large in November and December for a variety of reasons. The outage at the Keystone pipeline led to a rapid buildup in oil inventories in Canada, and storage hit a record high in December.

Also, Canada’s oil industry has been unable to build new pipelines to get the landlocked oil from Alberta to market. Alberta oil producers are essentially hostage to their buyers in the U.S., and with oil production now bumping up against a ceiling in terms of pipeline capacity, the glut is starting to weigh on WCS prices. 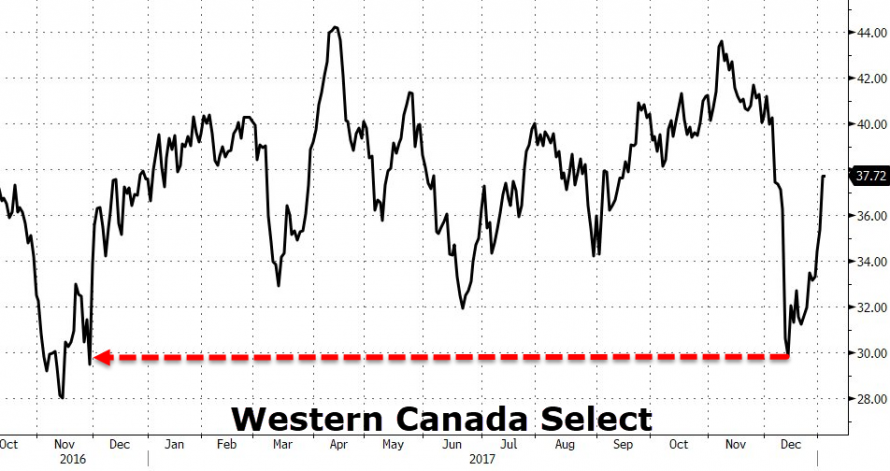 In December, Enbridge announced that it will ration the space on its Mainline oil pipeline system for January as Canada’s pipelines are essentially at full capacity. Enbridge said that it will apportion lines 4 and 67, which move heavy crude, by 36 percent. The term “apportionment” is a euphemism for rationing—essentially oil producers are unable to get all of their product onto the pipeline and are hit with restrictions. That means the oil has to be diverted into storage.

In short, there’s somewhat of a glut of supply in Canada right now. The problem is that there’s little prospect of a solution in the near-term. Railroads, although they are taking incrementally more cargoes, cannot handle the excess supply all on their own, especially with new supply coming online. And there are no serious pipeline capacity additions expected for about two years at the earliest. The three main proposals—Kinder Morgan’s Trans Mountain Expansion; TransCanada’s Keystone XL; and Enbridge’s Line 3 replacement—all face legal questions and uncertain completion dates.

On top of that, Canada’s oil sands producers are adding new supply. At today’s prices, it makes little sense to greenlight new upstream projects, particularly in expensive oil sands. But there are still some projects that are finishing up that were given the go-ahead years ago when oil prices were substantially higher. Suncor Energy is set to bring its Fort Hills project online, which will add nearly 200,000 bpd of new supply within 12 months.

That all means that the pressure on WCS probably won’t go away. The price meltdown from two months ago is probably now showing up in the rig count. The U.S. typically sees the rig count fluctuate in response to changes in the oil price by several months, and the rig count in Canada will only now start to reflect the price plunge from months ago. The rail industry might handle more oil cargoes, which could help push up WCS a bit, but the larger-than-usual discount might persist for some time.

Canada could add new refining capacity to process all of that oil right at home, an option that is often raised when WCS prices tank. IHS Markit recently studied several scenarios for Canada’s oil industry, including upgrading existing refineries to process heavy oil into a lighter synthetic form of oil, as well as building entirely new refineries. IHS Markit concluded that there is an opportunity to convert existing refineries, but that the abundance of light oil supply in North America could challenge the economics. New refining capacity is a risk. In any event, refined products and lighter oil would still need to be exported via pipeline.

In short, Canada’s oil industry faces more obstacles than, say, the much-watched shale drillers in the United States. The U.S. rig count is closely tracked around the world for clues into what happens next in the oil market—an increase is assumed to mean that more U.S. shale supply will be forthcoming while a decrease is a sign of market tightness and potentially higher prices. The publication of this weekly data has global implications.

Canada’s rig count, on the other hand, could continue to struggle even as U.S. shale drillers spring into action in response to higher prices. Canadian producers won’t benefit as much from the upswing in the global market due to their local and regional problems, mostly related to the lack of pipeline capacity.