When it comes to the state of the housing market in 2018, all eyes are on tax reform and specifically whether it will be encourage or damage the ongoing housing market recovery.

To some, tax reform is supportive of the housing market as it increases disposable income for many households. However, on the other hand, it reduces the incentive for homeownership by doubling the standard deduction, reducing the cap for the mortgage interest deduction (MID) to 750k and limiting property tax deductions along with state and local income tax to $10k. This results in fewer households that will itemize deductions, thereby making homeownership less attractive from a tax perspective.

While on the surface this is a major warning sign, based on a Zillow Survey, tax incentives are fairly low on the list of reasons to purchase a home, particularly among Millennials. The big challenge is for markets where there is a double whammy of high home prices and property/income taxes, which exists in New York, California and the DC region, for example.

As a reminder, one of the major points of controversy within the tax plan was over the removal of state and local tax (SALT) deductions, disproportionately affecting high-tax, or Democrat, states. The end result was a partial repeal, allowing for a $10,000 cap.

This has direct implications on regional housing dynamics as property tax also falls under the cap. Capping the deduction will mean reduced tax incentives for homeownership. Indirectly, households will want to live in lower income tax states.

The chart below from Bank of America shows a heat map for average amount claimed under SALT deductions, with redder states farther above $10k and greener states below. The Northeast and West coast - traditionally liberal bastions and, according to some, explicitly targeted by the Trump administration - generally have higher average amounts and will feel most of the pain. Meanwhile, the West and South have lower average amounts and so those housing markets will be less impacted. 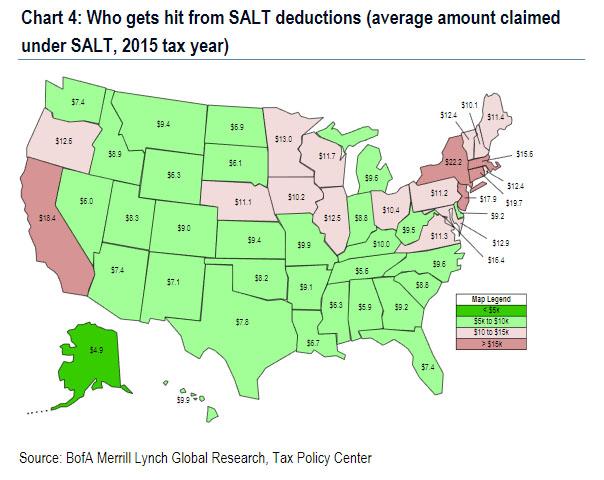 It doesn't end there.

Another provision affecting housing is the change in mortgage interest deductions (MID). Now mortgages up to $750k qualify, versus up to $1mn previously, and only if the mortgage is for your primary residence. Loans that were made before Dec 14 will be grandfathered in.

Taking into account the cap on SALT deductions and the doubling of the standard deduction, Zillow estimated that the percent of homeowners that will itemize falls to 14% from 44% prior to the tax changes. The table shows the counties that will be most affected. 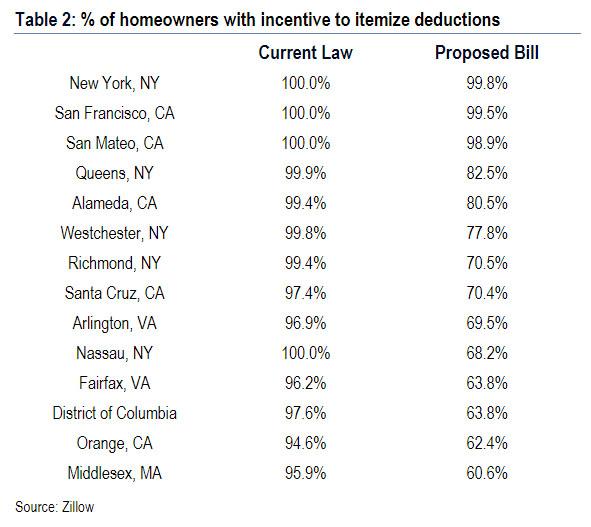 These are the markets that are most vulnerable to a weakening in housing activity. Of course, there are offsets from greater disposable income, but it is only partial.