Why Germans Are Being Paid To Use Power

Authored by Kent Moor via OilPrice.com,

Germany’s drive to use renewable sources of energy seems to be bearing fruit. Beginning last weekend, prices for electricity in the country declined below zero. 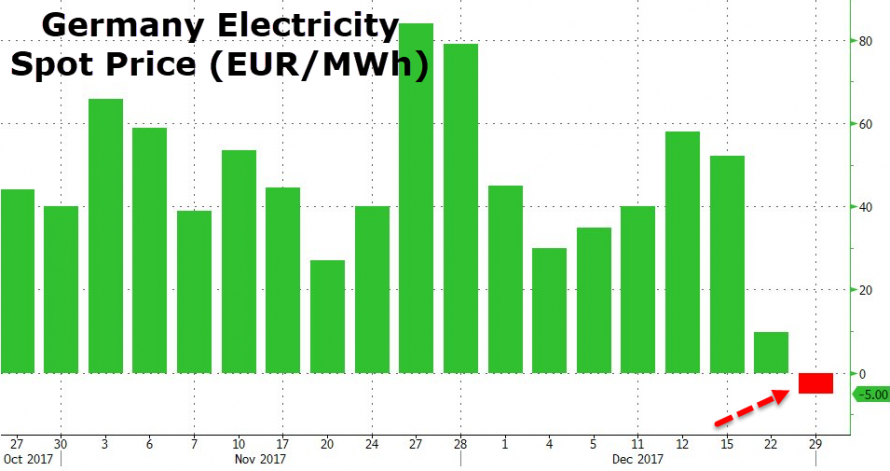 That means consumers are being paid to use the power, rather than the other way around.

This isn’t even the first time this has happened. According to one of Europe’s largest electricity trading exchanges (the EPEX Spot), it has happened more than 100 times in 2017.

All of this would seem to bode well for German households, long regarded as operating under the highest energy prices on the continent.

But someone else is getting paid.

Given the heavy amount of taxes and fees charged for power, the wholesale cost factors in only about 20 percent of the real price charged to the average residence.

That means that, while the period of negative costs helps, prices are still going up for German households.

Meanwhile, bigger wholesale users – industry, factories, and other primary end users – do see a nice pop. According to EPEX Spot figures, for example on December 24, such major consumers were paid about €50 ($59.50 at current exchange rates) per megawatt-hour (MWh).

The price decline results from a combination of low demand, warmer than usual temperatures, and the prevalence of ample winds that provided an abundance of wind power generation.

All of this results in excess supply that needs to be moved along the grid.

Due to the lack of efficient or effective battery and storage systems, electricity that is produced must be used.

It has become a traditional tradeoff between peak and off-peak hour generation or usage. The recently emerging German largess in solar and wind power has just accentuated the situation.

Meanwhile, variations on the demand side tend to contribute to supply excesses during times of low usage, such as weekends, and holiday periods. Both of those, of course, hit this past Sunday.

With the price tag for Germany now well over €100 billion, it would appear that the move to renewable, cleaner, energy has been successful.

Well, not so fast…

Negative prices notwithstanding, the move to increase the contribution made by solar and wind has created its own uncertainties. Both sources need backup energy sources for when sunlight and wind are not present.

And then there is the opposite extreme. Wind on average provides less than 14 percent of the daily power on the German grid.

But on very windy days it can easily provide many times that.

Unfortunately, traditional sources such as coal-fueled power plants and the nuclear reactors that are being phased out nationwide cannot be turned down rapidly enough when renewables dump additional power on the system.

The result is either negative prices or lack of immediate access to power during those spells in which the combination of sources don’t meet expectations.

Other European countries – France, Belgium, Switzerland, the Netherlands, and even Great Britain – have also had their own experiences with negative pricing. France generates well over 70 percent of its power from nuclear, meaning the negative pricing phenomenon is hardly a result of only new renewable energy volume.

Nonetheless, German experiences have been more persistent, even when the country has been able to export excess power. The late December episode is the most recent.

But a similar bout in October resulted in payouts to consumers almost twice as high.

Experts are pointing toward the major revision both Germany and the wider European grid system must now undertake. Until this spasm of negative pricing, the older view of global power systems had been considered adequate.

As one specialist noted this week, “we now have technology that cannot produce according to the demand, but is producing according to the weather.” This has become the main uncertain ingredient in the new age of rising renewable sourcing.

And one thing that’s becoming increasingly evident is that the new environment is providing a new stress on the wider power system.

This sets the stage for a range of possible changes in regulations and fee structures meant to encourage average households to tailor their energy use to periods of energy supply. That would seem to oblige some “carrot rather than stick” approaches.

Of course, that would mean benefits in lower costs moving directly down to the household level. That may take a bit more politics than just oddities in the energy grid.

Which means the push for renewables and energy storage will continue unabated in 2018.