The final exam for one California State University-Northridge class left students with little doubt as to their professor’s opinion of Donald Trump and Hillary Clinton.

The online final for African Studies 161, “American Political Institutions: A Black Perspective,” taught by Professor Karin Stanford, asked students about both 2016 presidential nominees in similarly formatted questions, both of which included an “all of the above” option.

“Donald Trump frequently made statements of an _____ nature throughout this presidential campaign,” one question asked, offering students answer choices of “anti-Mexican,” “anti-Muslim,” “anti-woman,” and “all of the above.” 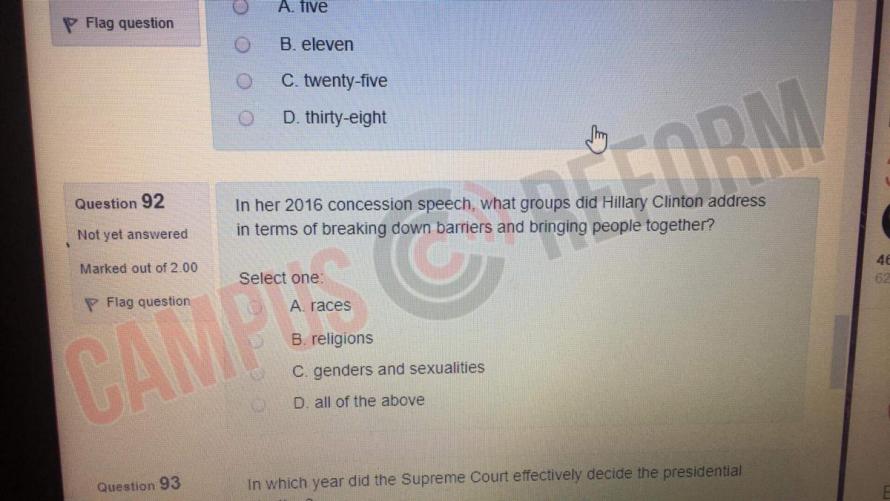 Another question asked students to name the groups Hillary Clinton addressed “in terms of breaking down barriers and bringing people together?” The students could select from “races,” “religions,” “genders and sexualities,” or “all of the above.”

An anonymous student, who was enrolled in the online class, does not recall learning any anti-Trump rhetoric in class nor in the textbook reading.

“The class is online-based, so the professor has not had a political bias for the most part and neither did the chapter readings, so it was really surprising to see this material on the final exam,” said the student.

“It was pretty random and annoying,” the student continued. “Like, don’t try and make me think a certain way, because everyone’s view is different.”

Campus Reform reached out to professor Karin Stanford for comment, but did not receive a response in time for publication.