Americans Are Ditching These Five States In Record Numbers

Apparently surging violent crime, massive tax hikes and insolvent public pensions are bad for attracting new residents...who knew? On the other hand, 364 days of sunshine per year, minimal crime, brand new infrastructure and some of the lowest tax rates in the country seems to be, to our complete shock, somewhat appealing to folks looking to relocate.

But that is just a couple of many interesting takeaways to be gleaned from the latest annual "U.S. Migration Report" from North American Moving Services which found that Illinois was the most ditched state in 2017.

A quick review of the data above, combined with the more comprehensive domestic migration map below, reveals a few other interesting themes:

1.  People continue to flee the indebted, pension ponzi burdened liberal states of America in record numbers, with Illinois, Connecticut, New Jersey and California all ranking at the very top of the most ditched states of 2017.

2.  The natural migratory pattern of New England and California's liberal elitists seems to be toward cheaper and lower taxed states in the Southeast and Western portions of the country...go figure. 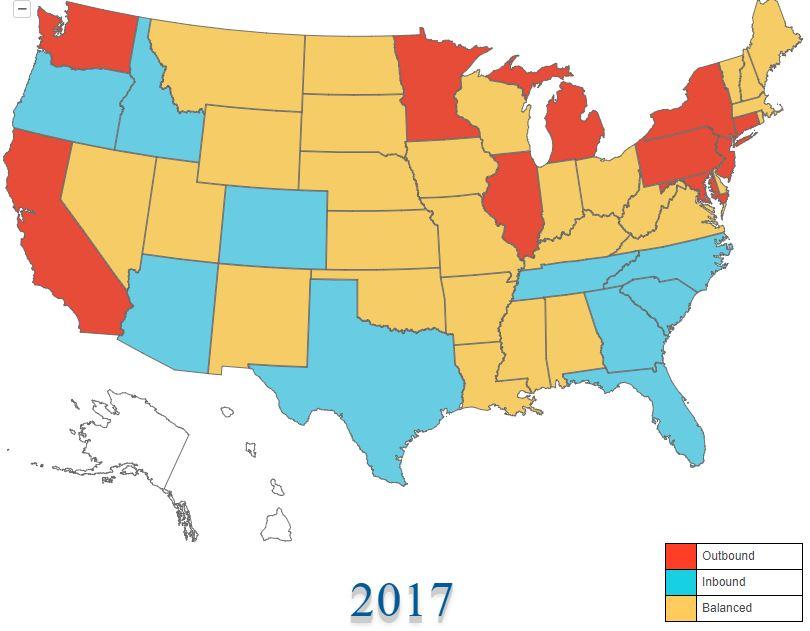 Of course, this data from North American shouldn't come as much of a surprise as we recently noted that Illinois lost a staggering ~125,000 residents in aggregate, or roughly 1 man/woman/child every 4.3 minutes for the entire year of 2017.

In fact, recent Census Bureau  numbers also confirmed that the mass exodus from Illinois was the largest of any state in the country with lower taxed, lower cost of living states like Texas and Florida posting the biggest gains.

Meanwhile, adding insult to injury, the domestic migration out of Illinois was enough to push the state down one notch on the overall state population ranking tables to just below Pennsylvania. Per Illinois Policy:

Here are some other observations of recent migratory patterns from North American:

Northeastern states - Connecticut has consistently been in the top 10 of outbound moves since 2013. It was #1 in 2013 and #2 in 2017. Pennsylvania, New York and New Jersey have also made the list consistently since 2013. Maine and Rhode Island have both gone back and forth in having more inbound and outbound moves over the years.

Southern states - South Carolina was in the #1 spot in 2013 and 2014, then started to slip down. They were still in the top 4 but lost their top ranking as the state with the most inbound moves. North Carolina beat South Carolina for the first time in 2016 and kept their rank in 2017. Tennessee, Georgia, Florida and Texas remained constant in the top 10 from 2013-2017. Overall, the Southern states have had more inbound moves than some of the other regions.

Of course, the overall trend of folks moving out of 'Blue States' and into "Red States' could spell disaster conservative politicians running in national elections...that is unless the folks ditching their over-taxed, insolvent, liberal bastions on the West Coast and New England actually understand that the conservative policies in their new home states are precisely what attracted them there in the first place...somehow we doubt that will happen.