Just before midnight on Thursday, as residents of the battered eastern US were heading to bad after a long day of coping with the bomb cyclone, President Donald Trump was awake and apparently still fuming over the excerpts from Michael Wolff's "Fire And Fury: Inside Trump's White House".

And as Trump often does when he's frustrated, he decided to coin a new nickname for his erstwhile adviser and political ally, Steve Bannon - the source of many of the book's most jaw-dropping claims. Playing on Bannon's famously unkempt appearance, Trump labeled the Breitbart News chief "Sloppy Steve."

I authorized Zero access to White House (actually turned him down many times) for author of phony book! I never spoke to him for book. Full of lies, misrepresentations and sources that don’t exist. Look at this guy’s past and watch what happens to him and Sloppy Steve!

Trump's lawyers  slapped Bannon with a cease & desist letter on Wednesday. Shortly afterward, Trump pointed out Bannon's declaration on Breitbart radio the night before, where the anti-establishment Republican called the president "a great man" and said he still supported him. 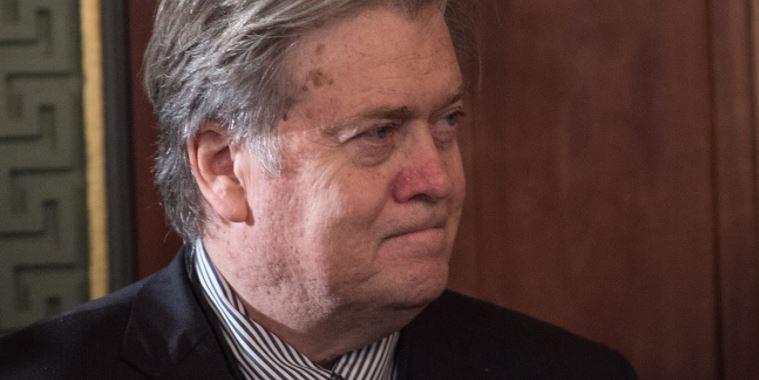 "Looks like he's changed his tune," Trump told the reporters. Trump's legal team is also racing to stop the publication of Wolff's new book, which was moved ahead to Friday and is reportedly already selling out at many book stores. Wolff cheekily thanked the president for what is probably the greatest marketing push an author could ask for ("buy the book the White House doesn't want you to read!")

Meanwhile, Bannon's former political allies are rapidly trying to distance themselves from the renegade pol. The New York Times reported that the Mercer family has publicly denounced Bannon after being infuriated by the claim, included in the book, that they would back him if he decided to run for president in 2020.

CNN  reported that there's been "a hard push" to convince Breitbart CEO Larry Solov and Susie Breitbart to fire Bannon.

That's quite the fall from just a year ago when, shortly after the inauguration, Trump granted Bannon's request to be included on the National Security Council.