America’s declining influence in the Middle East and the Pacific Rim has been in hyperdrive this week following President Trump’s tweetstorm against Pakistan.

On New Year's day, Trump unleashed a series of tweets accusing  Pakistan of harboring terrorists, and went so far as to threaten cutting off the country’s financial aid. To make matters worse, U.S. Ambassador to the United Nations Nikki Haley, also accused Pakistan of playing “a double game for years,” and said President Trump would withhold $225 million in aid to the country.

Trump’s tweetstorm did not impress the Pakistani government: in response, it announced that it would be evicting some 1.4 million Afghan refugees from the country later this month. The Pakistani government also announced closer ties with China, and would ditch the dollar in bilateral trade with China, a move that has threatened Washington’s diplomatic relations with Pakistan.

And now, according to the Washington Times, Pakistan will further boost economic and defense ties between Beijing and Islamabad. The report specifies that China is planning to build a military base in Pakistan, which would be its second military base in the East. The naval installation will be erected in a key strategic location: the Pakistani town of Jiwani, a port near the Iranian border on the Gulf of Oman and near the Straits of Hormuz, which resides at one of the six proposed economic corridors of the One Belt One Road Initiative, commonly called the Silk Road Economic Belt. 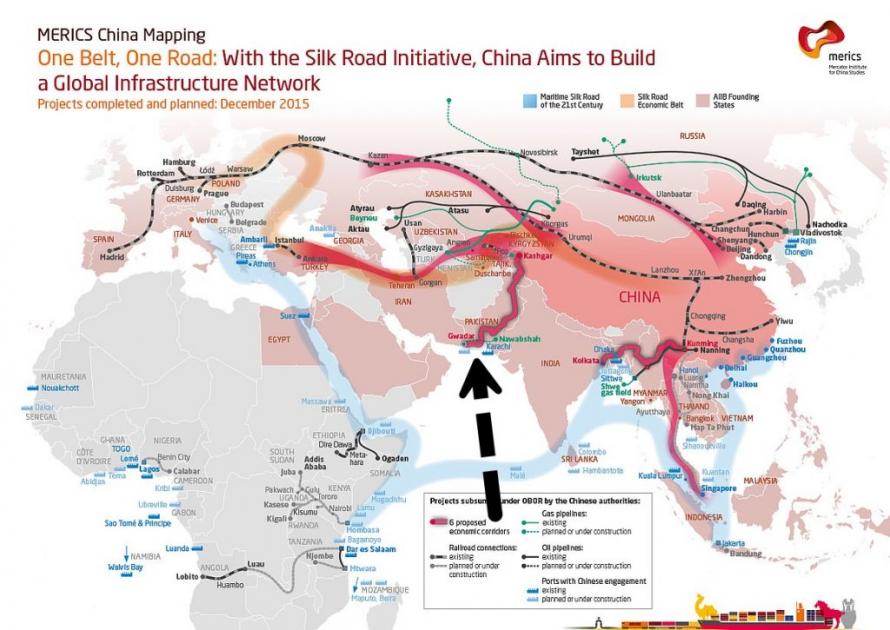 Plans for the base were advanced during a visit to Jiwani on Dec. 18 by a group of 16 Chinese People’s Liberation Army officers who met with about 10 Pakistani military officers. Jiwani is located on a peninsula about 15 miles long on a stretch of land with one small airfield.

China’s economic strategy in the Jiwani region of Pakistan is as follows:

Plans call for the Jiwani base to be a joint naval and air facility for Chinese forces, located a short distance up the coast from the Chinese-built commercial port facility at Gwadar, Pakistan. Both Gwadar and Jiwani are part of Pakistan’s western Baluchistan province.

...
The large naval and air base will require the Pakistani government to relocate scores of residents living in the area. Plans call for their relocation to other areas of Jiwani or further inland in Baluchistan province.

The Chinese also asked the Pakistanis to undertake a major upgrade of Jiwani airport so the facility will be able to handle large Chinese military aircraft. Work on the airport improvements is expected to begin in July.

The naval base and airfield will occupy nearly the entire strategic peninsula.

Jiwani will be China’s second overseas military base, in addition to the first foreign military base opened last year in Djibouti, a small but tactically critical African nation near the Horn of Africa, where China deployed troops  for the first time last July. In doing so, China has direct oversight and visibility of the Bab el-Mandeb Strait in the Red Sea, which together with the Suez Canal and Strait of Hormuz, is one of the planet’s most important oil chokepoints.

Washington has called China’s foreign military base expansion the “string of pearls” strategy. Meanwhile, as the world grows fed up with Washington's overseas policies, the Chinese are using this opportunity to roll out military bases in the Persian Gulf through the Indian Ocean, and in South East Asia.

Harrison Akins, a researcher at the Howard Baker Center who focuses on Pakistan and China, told Newsweek, “Chinese investment in Pakistan is expected to reach over $46 billion by 2030 with the creation of a [China-Pakistan Economic Corridor] connecting Balochistan’s Gwadar Port on the Arabian Sea with Kashgar, in Western China.”

“Trump will soon find that his ability to unilaterally exert pressure to promote U.S. policy and security abroad is severely limited, as Pakistan has increasingly relied upon China for economic and military assistance,” Akins added.

So as Pakistan pivots away from the US, both financially, diplomatically and militarily, China is happy to step in and fill all the voids.

And so, America’s fading influence has claimed its latest victim, Pakistan. In one week, President Trump and Niki Haley have managed to collapse the bilateral relations between Pakistan and the United States, which has spurred China to pick up the broken piece and start nation-building in Pakistan. And as China tastes diplomatic success, the same blueprint will soon be applied to all other "US-allied" nations in the region.