Iran Claims It Has "Hard Evidence" Of Foreign Meddling In Protests

Friday's UN Security Council meeting didn't disappoint in terms of the anticipated level of inflammatory rhetoric and accusations. Also not unexpected is that the US finds itself isolated after a week of the Trump White House going on the offensive: first by essentially calling for regime change in Iran after the onset of mass protests last week (the State Dept.'s first statement a week ago referenced "transition of government"), and then came the bombshell announcement that all foreign aid to Pakistan, which reportedly totals up  to $2 billion in promised security aid, has been cut.

And not helpful to any of this was Trump's lashing out through a series off the cuff tweets aimed at Iran and Pakistan in the past days - some of which may have precipitated Pakistan's finally pulling the trigger on ditching the dollar in trade with China in retaliation. 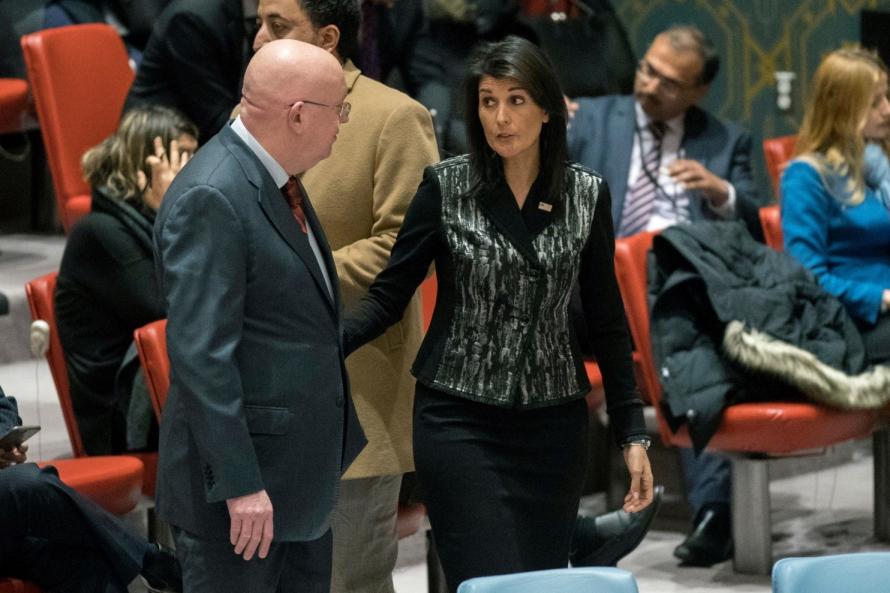 Image via the AP

These countries and others came out swinging at the UN. First, Iran's ambassador told the meeting that his government has "hard evidence" that recent protests in Iran were "very clearly directed from abroad."

According to the Washington Post, Iran's highest legal authority previously claimed direct CIA involvement in the unrest which has now taken over two dozen lives, including at least one police officer and three Iranian intelligence officers who were reported killed during clashes in the western city of Piranshahr on Wednesday. The Washington Post summarized the allegations as follows:

Iran’s prosecutor general, Mohammad Jafar Montazeri, alleged Thursday that an American CIA official was the "main designer" of the demonstrations. And Iranian Ambassador Gholamali Khoshroo - whose country isn’t a Security Council member but was invited to participate Friday - said the protests had gotten "direct encouragement by foreign forces including by the president of the United States."

The Trump administration has denied having any hand in the demonstrations, saying they arose completely spontaneously. The CIA declined to comment.

Ambassador Gholamali Khoshroo also accused the United States of abusing its power as a permanent member of the Security Council by calling for a meeting to discuss the protests. "It is unfortunate that despite the resistance on the part of some of its members, this council has allowed itself to be abused by the current U.S. administration in holding a meeting on an issue that falls outside the scope of its mandate," he said.

Iran's accusation was backed by Russia, whose envoy Vasiliy Nebenzia addressed the US head on, asserting "You are dispersing the energy of the Security Council, instead of focusing it on dealing with key crisis situations in Afghanistan, Syria Libya, Iraq, Yemen, DPRK, the African continent. Instead of that, you are proposing that we interfere in the internal affairs of a state." The Russian representative continued, “We obviously regret the loss of lives as a result of the demonstrations that were not so peaceful. However, let Iran deal with its own problems, especially since this is precisely what’s taking place.”

Russia further presented the US position as one of hypocrisy: "If we follow your logic, then we should have meetings of the Security Council after the events in Ferguson or after the dispersal by force of the Occupy Wall Street movement in Manhattan,” Vasiliy said. "We don't want to get involved in destabilizing Iran or any other country."

This was in response to US Ambassador to the UN Nikki Haley's opening speech, who characterized the week long unrest in Iran as a "spontaneous expression of fundamental human rights," claiming the protests were simultaneously playing out in "over 78 locations" - though according to many reports anti-regime protests have largely died down while giving way to possibly larger pro-government rallies. She ascribed the usual freedom and democracy motives to the Iranian demonstrators - which by the accounts of many analysts are multi-faceted and complex, mostly focusing on deep seated economic grievances - something to be expected anytime protests occur in any country whose government the US doesn't like.

"In the end, the Iranian people will determine their own destiny. Let there be no doubt the US stands unapologetically with those in Iran who seek freedom for themselves, prosperity for their families and dignity for their nation. We will not be quiet," Haley said, while also derisively shooting down accusations that protesters and provocateurs being used as "puppets of foreign powers." She said the US was absolutely sure that protests were not at all being driven by external influence or intervention. She further reiterated a warning first emphasized in a prior State Department press release: "The Iranian regime is now on notice: The world will be watching what you do."

Meanwhile Turkey's Recep Tayyip Erdoğan has added his name to the growing chorus of countries charging the US with meddling in the internal affairs of both Iran and Pakistan, and other Muslim majority countries. At an Istanbul press conference on Friday, Turkey's president accused the US of seeking control of the Middle East's resources, saying, "We cannot accept that some countries - foremost the US, Israel - to interfere [sic] in the internal affairs of Iran and Pakistan," according to the AFP.

A number of nations, including European countries like France, have worried that the US is exploiting Iran's domestic situation to undermine the 2015 nuclear deal (the Joint Comprehensive Plan of Action, JCPOA). Earlier in the week Russian Deputy Foreign Minister Sergey Ryabkov expressly warned the US "against attempts to interfere in the internal affairs of the Islamic Republic of Iran," while stressing, "what is happening there is an internal affair".

And even France in a rare moment of complete agreement with Russia and Iran earlier in the week slammed the US for prematurely using human rights to undermine the nuclear agreement. On Wednesdays President Emmanuel Macron told reporters, "The official line pursued by the United States, Israel and Saudi Arabia, who are our allies in many ways, is almost one that would lead us to war." He charged that some countries seemed to be engaged in a “deliberate strategy” to undermine the JCPOA.

“Otherwise, we end up surreptitiously rebuilding an ‘axis of evil’,” Macron said in reference to an infamous phrase by former President George W. Bush, who used the phrase to describe countries including Iran, Iraq and North Korea. Macron further warned at the time that the world could go down a path of a "conflict of extreme brutality" should US pressures on Iran continue.

During Friday's UN emergency session, France stuck by Macron's earlier words, as French Ambassador Francois Delattre urged a careful approach to Iran's internal matters, saying just before the meeting, "Yes, of course, to vigilance and call for full respect of freedom of expression, but no to instrumentalization of the crisis from the outside - because it would only reinforce the extremes, which is precisely what we want to avoid."

His call to cautiously prevent the "instrumentalization of the crisis from the outside" is a clear reference to repeat Israeli and US officials' demands for international solidarity with the anti-Tehran protesters in cause of regime change. Thus when even France sides squarely against the US and with Iran and Russia, the US has definitely found itself isolated on the world stage.