The new year has only just begun, but already Democratic politicians in the country’s largest high-tax states are threatening lawsuits and publicly touting proposed workarounds to help compensate tax payers for the elimination of the state and local tax (SALT) deductions which were dramatically rolled back, along with deductions for mortgage interest, as part of the White House’s tax reform plan.

During his state of the state address earlier this week, New York Mayor Andrew Cuomo threatened to sue the federal government over the tax bill, claiming that the plan is unconstitutional and overly burdensome to New Yorkers.

Cuomo said that the new law could raise some families' taxes by as much as 25% and said the plan amounted to "double taxation." He later accused President Donald Trump of waging “economic civil war” on states that didn’t back him during the election, and promised to consider workarounds that would help lower residents’ federal tax bills, according to Bloomberg.

Then, on Thursday, California Senate President Pro Tempore Kevin de Leon introduced a bill that the Washington Post said could become a model for how blue states push back against the Trump tax plan.

According to the Trump tax plan, which took effect in January, taxpayers can only deduct up to $10,000 in state and local taxes when they file their federal return.

De Leon’s bill, if it became law, would essentially allow Americans to deduct much more than the $10,000 limit by redirecting state tax payments into a type of charitable contribution that would be later redirected to the state. The new federal tax law, which was supported only by Republicans, went into effect in January and does not include any caps on charitable deductions.

“The Republican tax plan gives corporations and hedge-fund managers a trillion-dollar tax cut and expects California taxpayers to foot the bill,” de León said in a statement. “We won’t allow California residents to be the casualty of this disastrous tax scheme.”

Several states have said they are looking for ways to challenge or work around the law, particularly states such as California and New York where residents pay a higher level of local taxes that they have traditionally been able to deduct without any limits. New York Gov. Andrew M. Cuomo (D) has said he is looking at a way of challenging the new law in court.

Then on Friday, incoming New Jersey Gov. Democrat Phil Murphy said he’s working on a plan similar to California’s that would allow taxpayers to pay a percentage of their state income taxes as if they were a charitable donation. The money will eventually be redirected to the state. And there’s nothing in the Republican tax plan that limits charitable deductions.

Predictably, the White House has threatened to push back against these strategies. During a televised interview this week, Gary Cohn said the administration would be looking into ways to stop states from implementing these work-arounds. 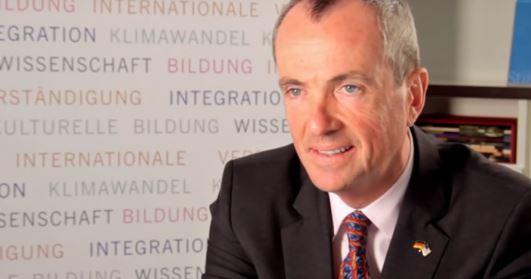 Even the Republicans’ rosy projections show the cuts will add nearly $1.5 trillion to the national debt in the coming decade. That number could grow if Democratic states succeed in their workarounds.

Phil Murphy, a Democrat who will be sworn in as New Jersey’s governor on Jan. 16, said Friday he’s working on a plan that would effectively convert property taxes into charitable gifts. Murphy joins New York Governor Andrew Cuomo and California Senate President Pro Tem Kevin de León, who have also said they’re considering ways to shield their constituents from a new $10,000 federal cap on state and local tax deductions.

“I understand what they’re trying to do for their cities and their states and their taxpayers,” said Cohn, director of the National Economic Council, during a Bloomberg Television interview Friday. “We at the federal government still have to collect revenue.”

The state actions and Cohn’s response suggest a looming showdown or the beginning of a cat-and-mouse game between state and federal policy makers, experts said.

Before the Republican Congress’s tax overhaul took effect Jan. 1, most filers could deduct state and local taxes from their federal returns, a benefit that applied to property, income, and other levies. But the new law that President Donald Trump signed last month caps the so-called SALT deduction at $10,000, a change that could cost residents of high-tax states billions of dollars.

Even before the tax bill passed, states have been squabbling with the IRS over what their tax payers can do to pay as much of their upcoming tax burden under the previous tax regime.

A precursor to tension between the federal government and states first emerged at the end of December over the prepayment of state and local property taxes. Some officials in states including New York and New Jersey encouraged homeowners to prepay their 2018 property taxes before the end of 2017 so that they could claim those deductions under the previous tax code - without the $10,000 cap.

But the IRS issued guidance that would effectively limit or kill the prepayment benefit for millions, saying the taxes in question would have to have been assessed by local tax authorities in 2017 to qualify for deductibility on 2017 returns. Many jurisdictions hadn’t yet done such assessments for 2018 property taxes - putting prepayments in question and stirring anger and confusion across the country.

The new limit hits California and New York hardest, due to their high state taxes and large populations. Connecticut, New Jersey, and the District of Columbia round out the top five jurisdictions where individuals claimed the largest average SALT deductions. In each of these states, the average itemizer paid nearly double the cap that the new Trump tax plan imposes.

But whether Murphy’s plan - and the plans being implemented by blue states on both coasts - succeeds is a matter of debate, even though a 2011 IRS memo seems to approve taxpayers claiming writeoffs for these types of gifts.

Murphy said there’s precedent for the charity approach, but the IRS memo shouldn’t be considered as such, Andy Grewal, a professor at the University of Iowa College of Law, told Bloomberg.

“If somehow this did succeed, Congress could just pass a one sentence statute,” said Grewal. “It’s too good to be true.”

New York Governor Cuomo also said he’s developing a plan to shift the state from a personal income tax to a system of payroll taxes levied on employers, who’d still be allowed to deduct such levies on their federal taxes by law. Tax officials in Connecticut are considering a similar plan. 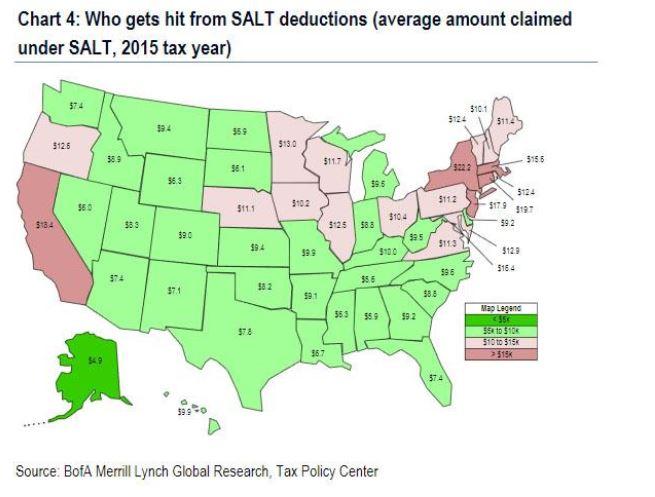 Replacing state income taxes with payroll taxes would be complicating, requiring employers to adjust wages and potentially create a system of tax credits. It would also offer a more widespread economic benefit than would the charitable-giving strategy, since a shift to payroll taxes would also apply to taxpayers who don’t itemize, according to David Kamin, a New York University School of Law professor.

Proposals from New York and California are “interesting, but unlikely to succeed for both legal and practical reasons,” Jared Walczak, a senior policy analyst at the conservative-leaning Tax Foundation, said in a report Friday.

“If states are genuinely concerned about the effects of their tax codes absent an uncapped state and local tax deduction, they should consider revisiting their tax rates rather than devising increasingly convoluted and legally suspect workarounds,” Walczak wrote.

However, with many blue states like Connecticut already grappling with dangerously underfunded public employee pension obligations, the pressure on these states to stop wealthy taxpayers from leaving - as we noted yesterday - has never been greater.