In retrospect, the launch of bitcoin futures one month ago has proven to be a modestly disappointing event: while it helped send the price of bitcoin soaring as traders braced for the institutionalization of bitcoin, the world's most popular cryptocurrency has stagnated since the beginning of December when first the Cboe then CME started trading bitcoin futures, trading in a range between $12,000 and $17,000.

And while bitcoin futures markets volumes have been lower than most had expected, the past 4 weeks have provided enough data to observe how volumes and open interest have evolved.

Since then, volumes spike briefly in the following week coinciding with the launch of the CME futures, with volumes of on both exchanges at relatively similar levels.

Then, as JPM's Nikolaos Panagirtzoglou shows, after a spike in volumes to around $200mn on 22 December, which saw sharp swings in underlying Bitcoin prices, volumes have averaged around $50mn and $60mn per day on the CBOE and CME futures, respectively. 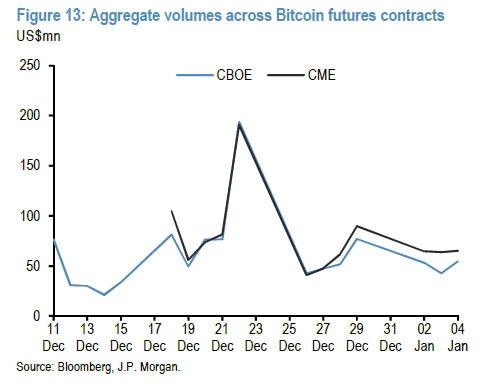 One month after their launch, futures trading volumes remain very modest compared to average Bitcoin trading volumes of around $15bn per day since futures contracts were launched according to coinmarketcap.com data. While open interest in both the CBOE and CME contracts has risen steadily, it too remains rather modest at around $60mn and $70mn, respectively.

Putting futures volumes in context, on Friday, the combined size of the bitcoin-futures markets at the two exchanges was roughly $150 million, measured in terms of the value of outstanding contracts, while the total value of all bitcoins in existence was around $290 billion. 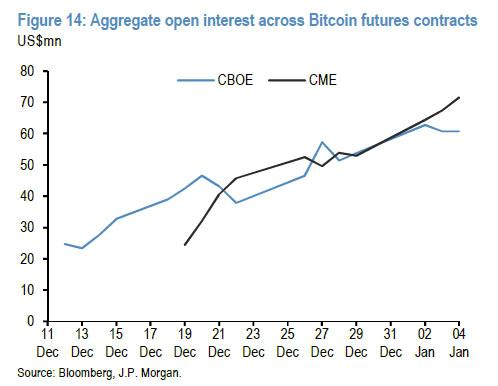 Another factor behind the slow volume growth may be the reluctance of many Wall Street banks to touch bitcoin futures. Firms such as JPMorgan Chase & Co. and Bank of America Merrill Lynch haven’t offered their clients access to bitcoin futures.

Another notable observation: with both volumes and open interest between the two sets of futures contracts converging, it suggests that a large degree of arbitraging of price differentials has taken place between the contracts which initially showed significant divergence. As JPM further notes, when trading in the CBOE futures initially started, a striking feature was the wide basis between the futures contract and the underlying bitcoin prices, which intraday exceeded $2000 or more than 12% of the underlying price at the time. While traders provided numerous explanation for the spread, since then the difference between futures prices on both the CBOE and CME contracts and underlying bitcoin prices has narrowed significantly (chart below), and even turned negative briefly last week. 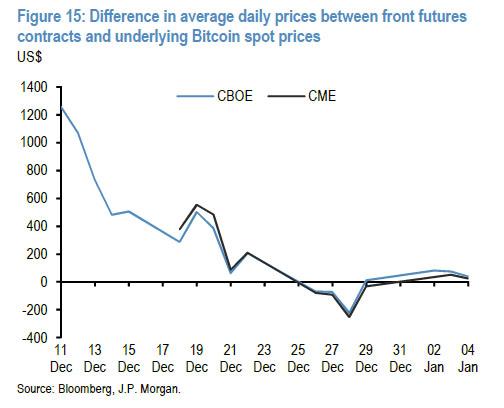 That covers bitcoin futures volumes, but what about positioning? Well, as many traders expected, it appears that institutions are using the futures product to slowly but surely build a short position in bitcoin. According to the CFTC Commitment of Traders report (available CBOE futures), non-commercial traders held a net short position of around $30mn as of Tuesday Dec 26, or around half of the total open interest.

Separately, the Traders in Financial Futures breakdown provided by the CFTC show that the leveraged funds category that consists largely of hedge funds and various money managers had a short of around $14mn, or around a quarter of the total open interest.

In other words, spec investors have used the futures contracts to establish Bitcoin shorts.

How does this compare with other asset classes typically used as a store of wealth such as gold and silver? As JPMorgan explains, for gold futures, non-commercial investors held as of Dec 26 a net long position of around 30% of open interest, of which the managed money category held around 80%, while in silver futures both the non-commercial and managed money categories were close to zero.

An analysis by the Wall Street Journal  confirms that while hedge funds and other large traders are betting that bitcoin will fall, small investors remain convinced that bitcoin prices will keep on rising.

As the WSJ reports, for traders who hold fewer than 25 of Cboe’s bitcoin futures contracts—a category that likely encompasses many retail investors—bullish bets are 3.6 times more common than bearish ones, according to the latest Commodity Futures Trading Commission data that cover trading through Tuesday.

Meanwhile, the big CBOE players in bitcoin futures tend to be short. For instance, among “other reportables”—large trading firms that don’t necessarily manage money for outside investors—short bets outweighed bullish “long” bets by a factor of 2.6 last week. 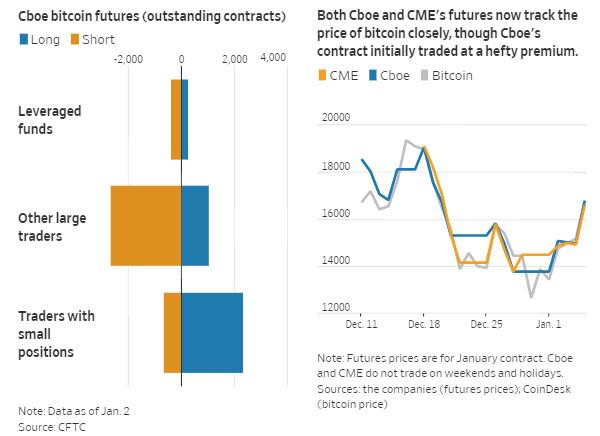 The historical data will probably not come as a big surprise: many skeptics on Wall Street have called bitcoin a bubble and would be more apt to bet on its decline. In a sign of how more conservative firms are keeping their distance, the CFTC data show near-zero trading in Cboe’s bitcoin futures by banks and asset managers.

“There is probably more optimism in the retail segment than there is in the institutional segment,” said Steven Sanders, an executive vice president at Interactive Brokers Group Inc., an electronic brokerage firm that offers its customers access to bitcoin futures.

Curiously, it is worth noting that that represented a less bearish outlook than they had in late December, when such funds had more than four times as many short bets as long bets.

To be sure, shorting bitcoin futures doesn’t necessarily mean a trader expects bitcoin to crash. In a natural hedge, a cryptocurrency trading firm with significant holdings of bitcoin might go short to hedge those inventories against a price fall. That would make the firm indifferent as to whether bitcoin goes up or down.

As the WSJ further notes, shorting futs could also be part of certain sophisticated trading strategies, such as betting that rival cryptocurrencies will outperform bitcoin. One such rival, Ethereum, rose above $1,000 for the first time last week, more than double its value from the beginning of December.

With the CFTC data, “you’re not seeing the full picture,” said James Koutoulas, chief executive of hedge-fund firm Typhon Capital Management, which trades futures in bitcoin as well as commodities. Typhon has swung back and forth, being long and short bitcoin futures at various times, Mr. Koutoulas said.

Of course, it's not just bitcoin. 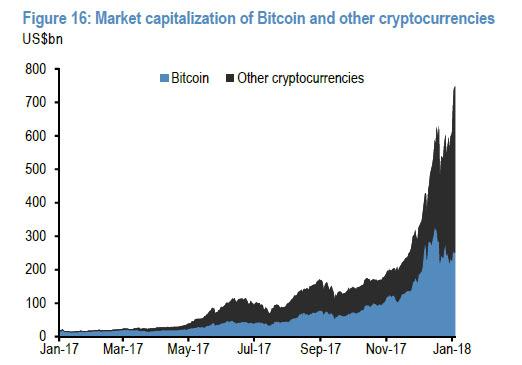 Other cryptocurrencies - mostly ethereum and ripple - have benefited from the increased interest in Bitcoin amid the listing of exchange traded futures, as well as the sharp rise in Bitcoin average transaction costs from around $6 per transaction in early December to nearly $60 per transaction on Dec 22, before settling in a $25-$30 range in recent days. 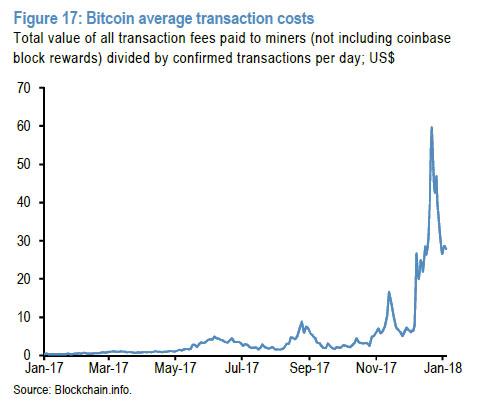 By contrast, average transaction fees in Ethereum reached a high of $1.50 in early December and were around $1 on Jan 4, while average transaction fees in Ripple measure a few cents according to bitinfocharts.com. The one-third share of Bitcoin of the total cryptocurrency market cap of around $770bn represents a new low. In contrast, the market of $770bn for the total cryptocurrency market represents a new high.

And while we await futures contracts to be announced on other cryptos, most likely ethereum and ripple next, events which we believe will be catalysts for substantial price upside in both cryptocurrencies, the question for bitcoin is who will be right: institutions, who are short, or retail investors (especially those in Japan and South Korea) who remain fervently long. If the past 7 years - in which retail has consistently trounced "smart money" returns are any indication, bitcoin is about to soar as yet another major short squeeze develops in the coming weeks and months.