Submitted by Rajan Dhall MSTA and Shant Movsesian of fxdailyterminal.com

After a brief correction in the USD last September, the market has been quick to get the knives out, and into year end, there really was no reprieve for the greenback as thin market conditions led some to push the reserve currency back to its low against the usual suspects.  Aiding the move at the end of last week was the headline miss in Dec payrolls, but with markets likely close to full strength from this week onwards, we hope to see a more measured approach with more consideration towards 'time-frame' rather than just grinding out the longer term consensus.

Top of the list is EUR/USD naturally, where we are constantly reminded that the Euro zone recovery is continuing at a steady (and robust) pace, with a somewhat obsessive focus on when the ECB will signal the end of the APP, with the current program set to the end of Sep.  Fair value levels based on the various PPP measures as well as FX swaps markets are seen to be closer to 1.2500, which is where the conservative targets for this year look to be.  It would however be dangerous to assume it will be a steady rise up to this area, with political obstacles yet to overcome, including the Italian elections now set for the start of March. 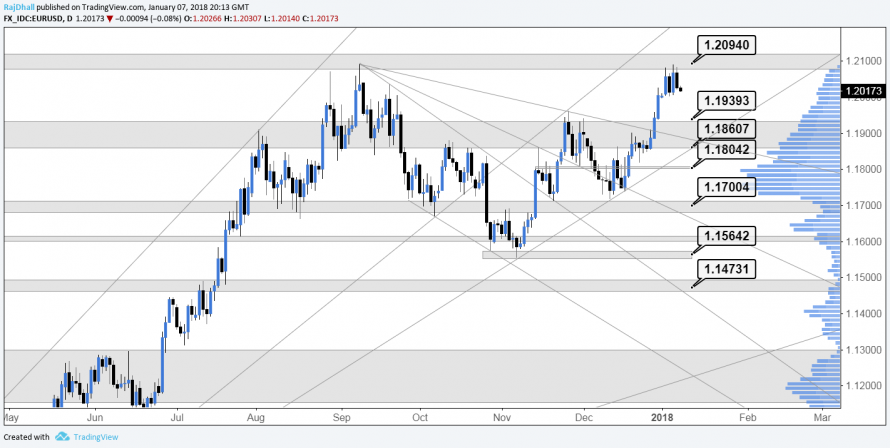 n a policy basis, we sense a little complacency over the respective stance at the ECB and Fed - the latter still seen hiking 2 or 3 times this year, while the former will halt QE at best and rate normalisation coming well after this - certainly not until next year.  This is where time-frames come in, and we expect any EUR/USD move above 1.2100 to be limited in progress and longevity.  Obvious stuff, but one which the market seems to have ignored in recent weeks and months. Closer in, next week's focus will be on the US inflation numbers at the end of week, and if we look to the ISM manufacturing prices paid index, there is room for upside here, as well as higher Oil price and indeed a weaker USD net-net.  Even looking at the jobs report, a 148K gain is not exactly bad news, especially if we measure the 'official' measure of unemployment in the US with the rest of the world. Average hourly earnings were also a touch higher, and if reports of a struggle to find skilled workers carry any weight, then we should see some degree of wage pass-through.  JOLTS data on Tuesday could shed some light on this.   In Europe, German data is stand out with factory orders on Monday, trade and industrial production on Tuesday and GDP on Thursday, but the Euro zone is not all about Germany and this is another reason to exercise caution on policy based EUR buying, as inter-member state fractures could rise.  EU sentiment indices on Monday mask the big picture in our view as do the employment and industrial production stats to some degree, so the ECB minutes on Thursday offer up more relevant insight as a result.  Plenty of Fed speakers next week with their familiar mix of sentiment on the rate path, including Williams, Bostic, Rosengren, Kashkari, Evans, Bullard and Dudley, but only Buba's Weidmann is scheduled to speak out for Europe.

Strong gains for the CAD after Canada's payrolls for Dec recorded gains close to 80K in Dec.  The market was largely looking for a flat month, but on the above data release, the odds for a Jan hike rose above the 50% mark as the market expects the BoC to react in the same way as it did last year.  Recent rhetoric suggests gov Poloz and his team will be a little more cautious on moving rates after the 50bp readjustment, but acknowledging capacity utilisation on the up, any delay will likely be criticised by market participants keen to get and edge - not that the BoC will mind.  Justifiably, they will act based on consistent data, so just as one should not take the Dec US report on its solitary merits, we expect the BoC to do likewise.    1.2000 is the target once again for USD/CAD, but we saw strong gains across the board, and the cross rates may offer better 'protection' and/or value at this stage. 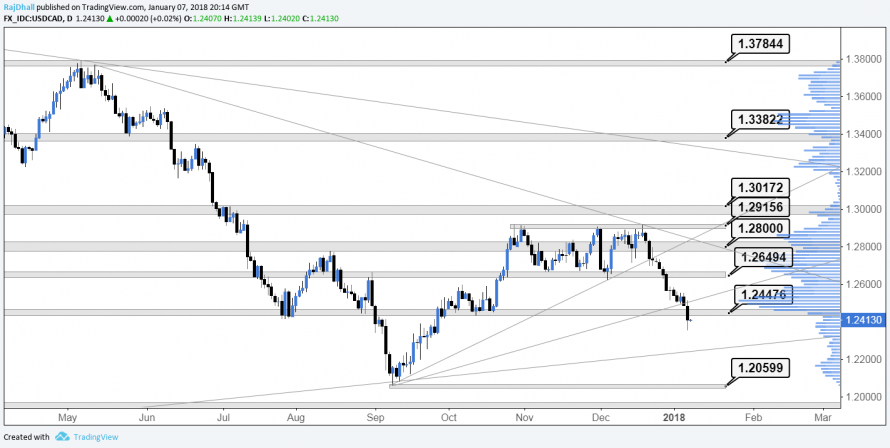 The EUR we have already covered, but GBP could offer a more attractive longer term prospect for the CAD, and indeed for the other major currencies - more so AUD and USD in our view.  We are still not convinced that the current recovery in the Pound has much basis considering outright optimism over how the Brexit talks will play out.  If this is ones reasoning to buy GBP at current levels, then at best, the risk to reward ratio just does not add up.  Yes, we have moved on to phase 2 talks, and yes the data has been holding up, but with lack of material progress in the EU talks - and this is where the real negotiating starts - business investment is being held up, and this will surely (not) feed through into growth and output, already forecast to lag the rest of the UK's key counterparts.

Cable is still pressing for a retest of 1.3600+ regardless - a breach of this level proving short lived in the break between Xmas and New Year - and even if we push up here again, we cannot see a comfortable passage higher unless there is real breakthrough in the talks - which are not set to resume until next month at the earliest.  EUR/GBP is an even tougher call given the risks mentioned above, so the commodity currencies amongst others could gain some notable ground as a result.  UK data next week is confined to industrial production and construction spending, along with trade data - all set for Thursday. 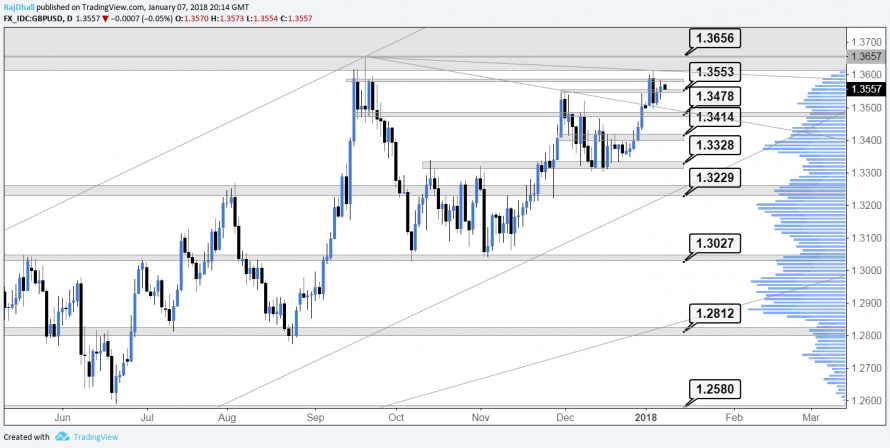 ositive spells for both the AUD and NZD over the last month or so - the former highlighting the strength of trend line support against the USD at 0.7500.  At the time, the domestic data was mixed at best, but failed to push the market below here, largely as a function of (re)developing USD weakness. Even so, we are some 3-3.5 cents higher, which is more than enough to build a cushion should the USD eventually get some respite as we expect.  Some will point to the rise in industrial metals as cause for the AUD recovery, but when looking at the timing of the rise in commodity price, it is/was not that clear cut.  Irrespective of this, the AUD continues to enjoy better levels, but from here, the market will be looking at the prospects of an RBA rate move this year, which will increase in probability only if wages and inflation start to rise.  The jobs market is healthy enough, but we can only reiterate the global phenomenon that is the breakdown of the Phillips curve. 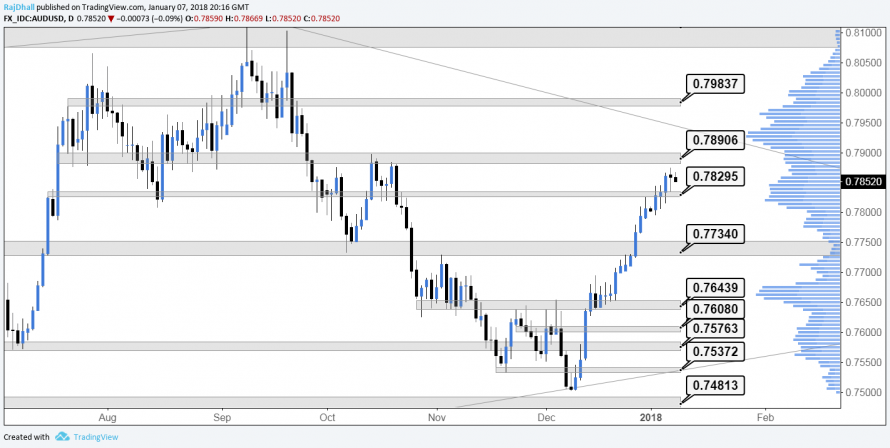 The external factors which have led to the AUD rise are better reflected in NZD, which has now returned to levels which now threaten a push on 0.7200.  We have seen little to prompt this other than fresh risk appetite which has fed through into the carry trade.  The pressure on the RBNZ is limited at this point in time with a new government in charge, and one which is keen to incorporate full employment into policy decision making.   Tight trade in AUD/NZD, which looks set to continue for now further highlights overall sentiment over the USD - and JPY.  Australian AIG construction index and retail sales are the major readings to monitor in this part of the world, with Chinese trade data at the end of the week having a lesser impact these days. 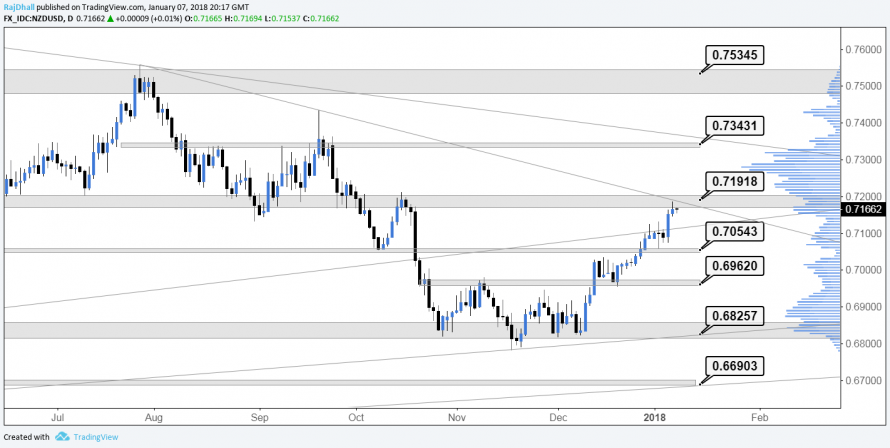 A slow start to the week in Japan with the Coming-of-Age holiday on Monday, but through the week we only see second tier data on offer including earnings figures, household confidence and bank lending, while the current account is expected to tail off a little more but set to stay well inside the range seen over the past year. None of this will impact on the big picture which is inflation, and this is down to the BoJ's obsession to return to the 2.0% target and keep asset buying in full flow until then.  JPY shorts continue to grow according to official data, despite elevated levels, and this is further exacerbated by ever rising equity markets.  The Nikkei depends on this based on export dependency in the current climate, but the inverse correlation has weakened in recent times and this looks to be more of an interesting dynamic given the relative levels in Japanese stocks.  This is one for another day. 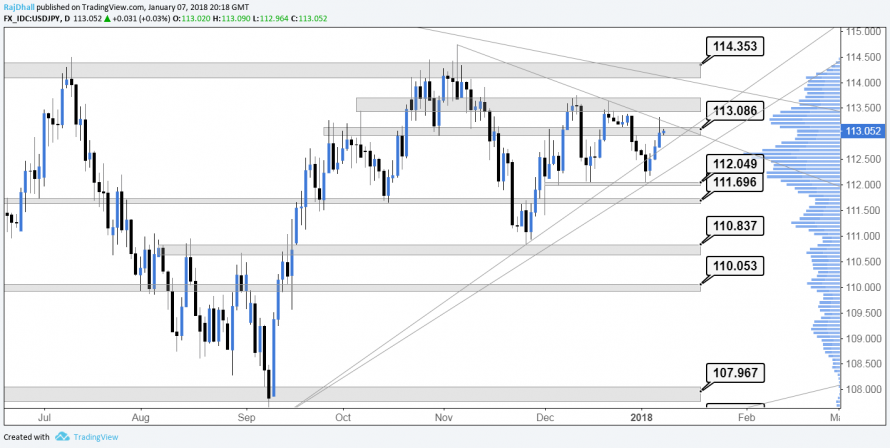