While most of the MSM fixated last week on whether or not President Trump eats McDonald's in bed while watching Gorilla TV, a flurry of investigative bombshells involving Hillary Clinton, the Clinton Foundation, and conduct by the FBI's top brass during the 2016 election splashed across the headlines. As a quick review:

Most of these wheels which appear to be in motion are the result of corresponding groundwork laid on Capitol Hill you may not be aware of, including what might be the most important document in the entire process, expected in a little over a week.

On January 15, the DOJ's internal watchdog - the Office of the Inspector General (OIG), is expected to present their findings to Congressional investigators regarding a wide variety of alleged bias and malfeasance by the FBI, the Clinton campaign, and the Obama Administration - both during and after the 2016 election. Moreover, the man heading up the OIG investigation, Michael Horowitz, fought the Obama Administration to regain investigative powers which were restricted by former Attorney General Eric Holder during the Fast and Furious scandal.

As you will read below, this highly anticipated report is likely to be the legal impetus behind a second Special Counsel - as detailed by an independent researcher from New York who goes by the Twitter handle "TrumpSoldier" (@DaveNYviii). His reporting, conveyed below, is a deep dig into the OIG's ongoing investigation, how Congress and the OIG have worked in tandem to pave the way for a Special Counsel, and how Michael Horowitz went to war with the Obama Administration to restore the OIG's powers.

Who is Michael Horowitz? 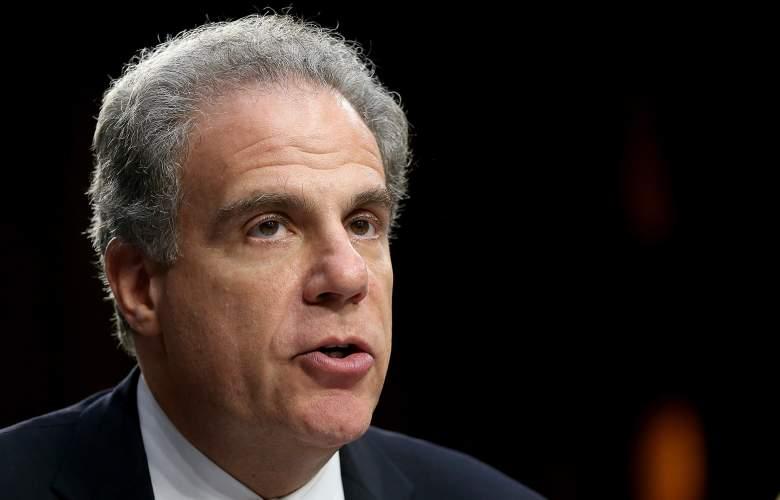 Horowitz was appointed head of the Office of the Inspector General (OIG) in April, 2012 - after the Obama administration hobbled the OIG's investigative powers in 2011 during the "Fast and Furious" scandal. The changes forced the various Inspectors General for all government agencies to request information while conducting investigations, as opposed to the authority to demand it. This allowed Holder (and other agency heads) to bog down OIG requests in bureaucratic red tape, and in some cases, deny them outright.

What did Horowitz do? As one twitter commentators puts it, he went to war...

In March of 2015, Horowitz's office prepared a report for Congress  titled Open and Unimplemented IG Recommendations. It laid the Obama Admin bare before Congress - illustrating among other things how the administration was wasting tens-of-billions of dollars by ignoring the recommendations made by the OIG.

After several attempts by congress to restore the OIG's investigative powers, Rep. Jason Chaffetz successfully introduced H.R.6450 - the Inspector General Empowerment Act of 2016 - signed by a defeated lame duck President Obama into law on December 16th, 2016, cementing an alliance between Horrowitz and both houses of Congress.

1) Due to the Inspector General Empowerment Act of 2016, the OIG has access to all of the information that the target agency possesses. This not only includes their internal documentation and data, but also that which the agency externally collected and documented.

See here for a complete overview of the OIG's new and restored powers. And while the public won't get to see classified details of the OIG report, Mr. Horowitz is also big on public disclosure:

13) Horowitz in 2017 took his organization to a new level via public disclosure. He no longer wants his findings hidden from us by the media. In May he created the twitter account @OversightGov. On October 1st his website https://t.co/TJqbITz0IR went live. pic.twitter.com/H8MKD6WzVE

Horowitz's efforts to roll back Eric Holder's restrictions on the OIG sealed the working relationship between Congress and the Inspector General's ofice, and they most certainly appear to be on the same page. Moreover, brand new FBI Director Christopher Wray seems to be on the same page as well. Click here and keep scrolling for that and more insight into what's going on behind the scenes.

13) "UNRING THAT BELL"#ChristopherWray reveals the IG Sword's power to re-open investigations. After a tangled legal exchange that runs out the clock he puts the Hillary investigation back on the table almost as an afterthought. Easily my favorite moment. pic.twitter.com/Y8xmf3vaQ0

Which brings us back to the OIG report expected by Congress a week from Monday.

On January 12 of last year, Inspector Horowitz announced an OIG investigation based on "requests from numerous Chairmen and Ranking Members of Congressional oversight committees, various organizations (such as Judicial Watch?), and members of the public." 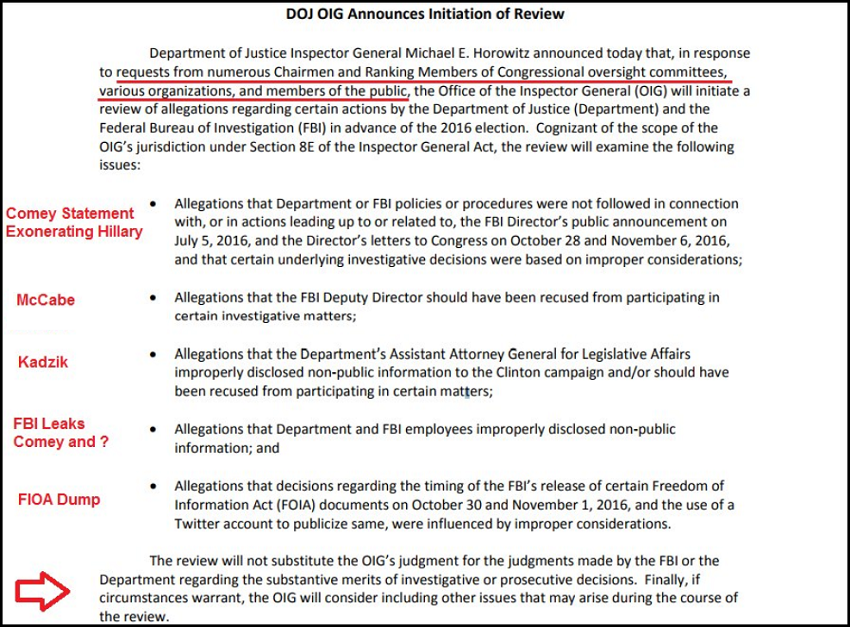 The questions range from Loretta Lynch directing Mr. Comey to mislead the American people on the nature of the Clinton investigation, Secretary Clinton's mishandling of classified information and the (mis)handling of her email investigation by the FBI, the DOJ's failure to empanel a grand jury to investigate Clinton, and questions about the Clinton Foundation, Uranium One, and whether the FBI relied on the "Trump-Russia" dossier created by Fusion GPS.

19) 14 Questions for the IG!
This powerful letter is a thing of beauty that expands the scope and establishes the legal framework for a special counsel. Read in it's entirety to see where we are headed. (Steel Dossier, Uranium One, Clinton Foundation)
PDF> https://t.co/gscpkulJ5O pic.twitter.com/VjXjwGRkr8

23) The July 27th letter is the key document. Everything needed to appoint a special counsel is contained within it. The letters preceding it were precursors and the ones after are add ons. All the IG has to do is reinforce that letter and a special counsel will be appointed.

On September 26, 2017, The House Judiciary Committee repeated their call to the DOJ for a special counsel, pointing out that former FBI Director James Comey lied to Congress when he said that he decided not to recommend criminal charges against Hillary Clinton until after she was interviewed, when in fact Comey had drafted her exoneration before said interview.

21) #Comey's Lies are catching up to him.
September 26th, 2017 continues the call for a special counsel as well as targets Comey's lie to Congress. They have Comey dead to rights. PDF>>https://t.co/G0ujwXzTE1 pic.twitter.com/zJuL0tbKm5

And now, the OIG report can tie all of this together - as it will solidify requests by Congressional committees, while also satisfying a legal requirement for the Department of Justice to impartially appoint a Special Counsel.

As illustrated below by TrumpSoldier, the report will go from the Office of the Inspector General to both investigative committees of Congress, along with Attorney General Jeff Sessions, and is expected on January 15. 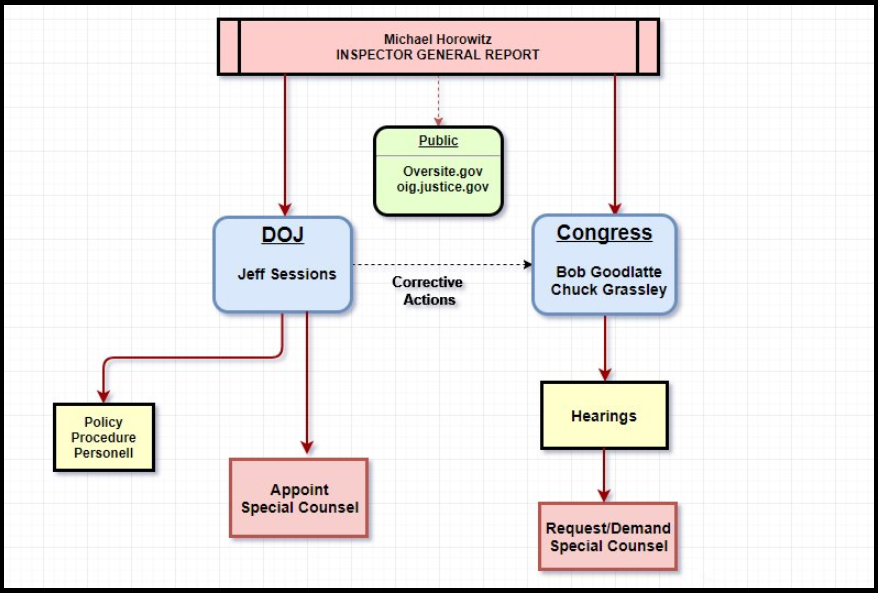 2) Congress will receive the Inspector General Report on January 15th, 2018. We learned this on December 13th, 2017 at The House Judiciary Committee hearing with Deputy AG Rod Rosenstein. pic.twitter.com/ZvzSKFdcrL

And while the DOJ could act on the OIG report and investigate / prosecute themselves without a Special Counsel, it is highly unlikely that Congress would stand for that given the subjects of the investigation.

The OIG report could be in the hands of the DOJ as soon as January 8 for review, however it is unclear whether their response will be included in the copy of the report issued to Congressional investigators on January 15. Their comments are key. As TrumpSoldier points out in his analysis, the DOJ can take various actions regarding "Policy, personnel, procedures, and re-opening of investigations. In short, just about everything (Immunity agreements can also be rescinded)."

10) The DOJ response is critical! Here Wray discusses actions that can be taken based upon the OIG Report. Policy, personnel, procedures, and re-opening of investigations. In short, just about everything. (Immunity agreements can also be rescinded) pic.twitter.com/Rf2qiXtVgm

Meanwhile, recent events appear to correspond with bullet points in both the original OIG investigation letter and the 7/27/2017 letter forwarded to the Inspector General:

With the wheels set in motion last week seemingly align with Congressional requests and the OIG mandate, and the upcoming OIG report likely to serve as a foundational opinion, the DOJ will finally be empowered to move forward with an impartially appointed Special Counsel with a mandate to investigate whether or not we should "lock her up" (along with members of her motley crew). Maybe that's why Sessions has been sitting on his hands?