"Anticipating Death Spirals": Here's Why Shopping Malls Are In Worse Shape Than You Think

For the past several months, we've written frequently about the epic collapse of the centerpiece of the 1980's retail model: the shopping mall.  With the growth of online sales finally starting to take a toll on brick-and-mortar retailers, shopping malls have faced a tidal wave of store closures and have been forced to backfill empty square footage with everything from libraries to doctors offices (see: America's Desperate Mall Owners Turn To Grocers, Doctors & High Schools To Fill Empty Space).

Alas, a new report from property-research firm Green Street Advisors, which analyzed 950 mall locations over 2017, 230 of which were collateralized within commercial mortgage-backed securities (CMBS) loans, the financial troubles for American mall owners might be even worse than feared due to organic tenant losses from lease expirations.

First, just to put the mall economic model into perspective, Green Street points out that while massive department store closures tend to dominate headlines, they represent a very small portion of mall income.  The real financial losses for mall owners come via the ancillary traffic impact on national and regional tenants which pay of the majority of mall lease income.

Facing widespread department store closure announcements over the last year and a dark prognosis from most industry experts, mall landlords have been doing their best to redevelop vacant boxes and prepare for a future with fewer anchor tenants. Although department store struggles have dominated headlines, they provide only a small portion of a mall’s net operating income (NOI) because many anchor tenants own their stores or pay little-to-no rent.

In-line tenants therefore have an outsized impact on mall NOI, and their performance offers a preferred indicator of mall health. With shorter lease terms and a higher rent burden, many tenants are making decisions in real time within each mall. The best in-line tenants to track are the ~300 national tenants who have at least 50 mall locations nationwide and are constantly judging the performance and cost of occupying space within any given mall.

“While the department stores take up a lot of space, they don’t generate much revenue for the mall owner,” Sullivan said. “The mall owner makes most of its money from the in-line tenants.” 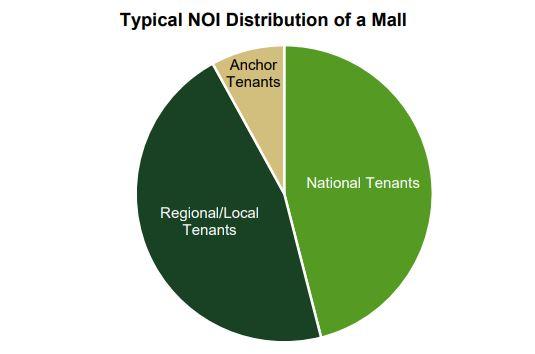 Of course, many large national tenants (e.g. Wet Seal, The Limited, etc.) have openly announced store closures which have presumably already been digested by investors.  That said, Green Street says the far more pressing issue for mall investors is to analyze which stores are quietly shrinking their mall footprints organically by simply choosing to forego lease renewals.  As Jim Sullivan of Green Street told Bloomberg, "when leases expire, they just don’t renew them, as opposed to breaking leases and doing something a bit more aggressive."

First, roughly 70% of the 950 malls studied experienced a decrease in national retailer in-line tenants. Second, while the average amount of net closures increased materially at lower-quality malls, there was a wide dispersion of net closures impacting malls across the quality spectrum. Third, while half of the top 25 net closing retailers have publicly announced store closures, the other half are closing relatively quietly and thus present significant risk to the sector.

As reported in the media, a wide range of retailers have been downsizing or closing their entire brick-and-mortar footprint (e.g., Wet Seal, The Limited). While some of these brands have publicized their closures, others have been doing so more quietly by choosing not to renew expiring leases. Given that in-line tenants have a higher rent per square foot burden and have shorter lease terms, these trends will often occur long before any anchor store closing announcements. The challenge for market participants is to not only track the closures, but also to assess the quality of new tenants backfilling the space. 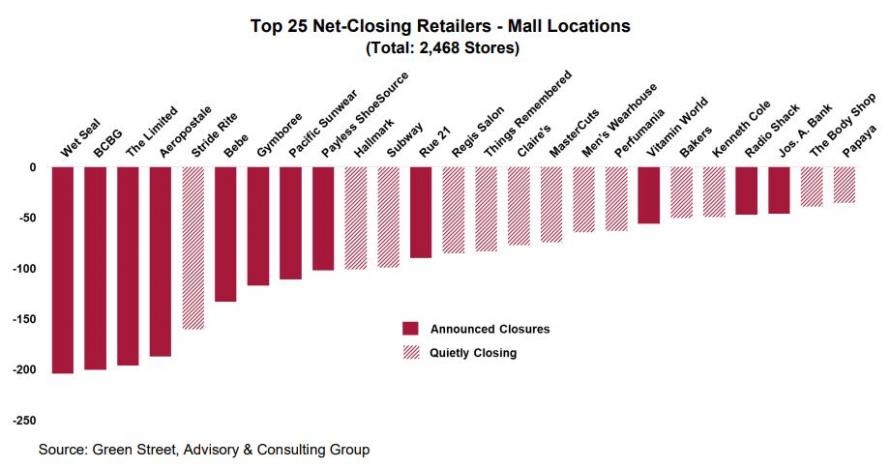 Meanwhile, even though lower quality malls are bearing the brunt of store closures, Green Street notes that A-grade malls are also experiencing significant closures as well.

Across the 950 malls studied, over two-thirds saw a net decrease in the number of national tenants. While ‘A’ malls performed relatively well, they have not fully escaped the closures due to some retailers shuttering all their locations regardless of mall quality. Furthermore, most top-quality centers already have more of the national retailers as tenants, limiting their ability to find other national tenants to replace those that leave. Conversely, many lower-quality centers are seeing significant changes in their ability to retain and attract national retailers despite already housing fewer national retailers on average than ‘A’ malls. This trend demonstrates the challenge that many malls are now facing as they fill vacancies with more local and regional tenants.

In conclusion, the key takeaway is that it’s hard to assess what real estate is worth in the retail sector today. In-line tenant activity can provide a window into individual mall health. The Advisory & Consulting group’s analysis concludes that ~70% of malls have suffered a recent decline in the number of national tenants. Understanding which malls are most at risk in a timely fashion is key to anticipating possible “death spirals,” where malls can lose as much as 90% of their value (much more than other property types). 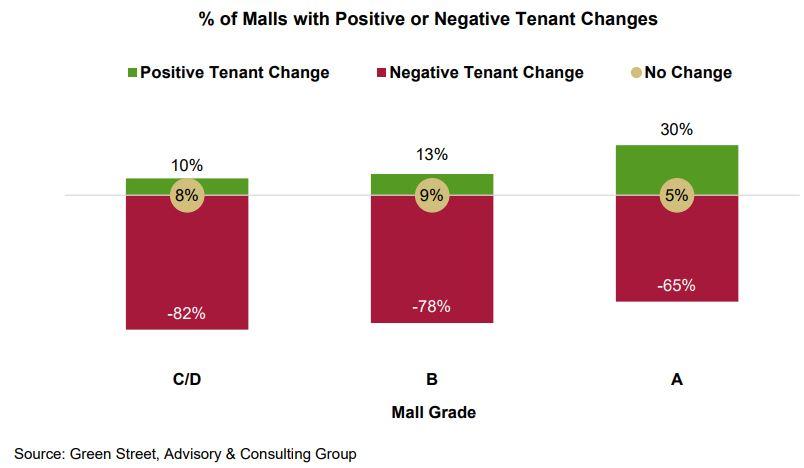 But we're sure it will all work out just fine and wall street will go on buying those mall reits with reckless abandon...you know, because dividend yields.