Last Week, For The First Time Ever, Someone Bought Bonds Sold By The ECB

One month ago, when the Steinhoff accounting fraud scandal erupted, sending the company's stock and bonds crashing...

... the biggest surprise was that none other than the ECB was found to be among the holders of Steinhoff's tumbling bonds. As we said at the time, "the ECB has emerged as the most prominent, if not so proud, owner of Steinhoff 2025 bonds as a cursory look of the ECB's latest holdings (courtesy of UBS) reveals:"

An ECB official confirmed, telling Bloomberg that the central bank owns "some" of the January 2025 bonds, declining to elaborate on the size of the holding (although it is limited to 70% of the total issue size). As Bloomberg notes, the ECB bought into the 800 million-euro Steinhoff Europe AG bond in July, the same month the note was issued. It is also distinctly possible that the ECB bought the bonds directly from Steinhoff, bypassing the secondary market directly and monetizing what would soon be "half off" paper.

The curious case of Steinhoff's corporate scandal and tumbling bonds, which were since downgraded to deep junk, or Caa1 by Moody's making them not only "fallen angels" but ineligible for ECB purchases (which demand at least one investment grade rating), sparked two questions:

On the first question, the wheels started turning last month when as we previously pointed out, there was a distinct change in the CSPP's Q&A language, in which the ECB replaced that "The Eurosystem is not required to sell its holdings in the event of a downgrade below the credit quality rating requirement for eligibility", with the following language:

The Eurosystem may choose to, but is not required to sell its holdings in the event of a loss of eligibility, e.g. in case of a downgrade below the credit quality rating requirement.

Well, as of Friday's close we now know that the ECB chose to sell its holdings of Steinhoff bonds, because according to the latest weekly list of securities held under the CSPP (link), one specific ISIN, XS1650590349 is no longer among the list of ECB holdings. That ISIN, as the table above shows, is that of Steinhoff's €800MM of 2025 bond, or the newly-junked bond in question.

And while it now appears that at least based on this one instance the ECB will have zero tolerance for fallen angels, it remains unclear how the ECB will Mark-to-Market the nearly 50% loss it has to eat on its Steinhoff bonds; 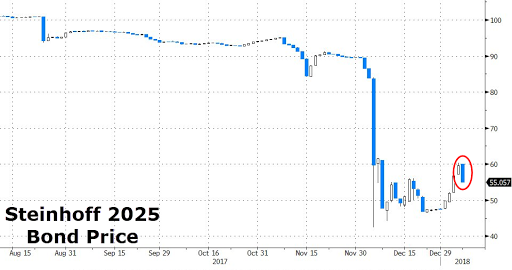 It is also unclear who is the lucky counterparty who, for the first time in history, bought bonds that the ECB was forced to sell.

Finally, and most importantly, the answer to the second question is still to be determined as it remains unclear what happens during the next recession when billions more such "Steinhoffs" suddenly explode on the ECB's balance sheet.

We look forward to finding the answer.