As reported earlier, during the Golden Globes ceremony last night, NBC raised many eyebrows when it controversially tweeted "Nothing but respect for OUR future president" with a photo of Oprah Winfrey. 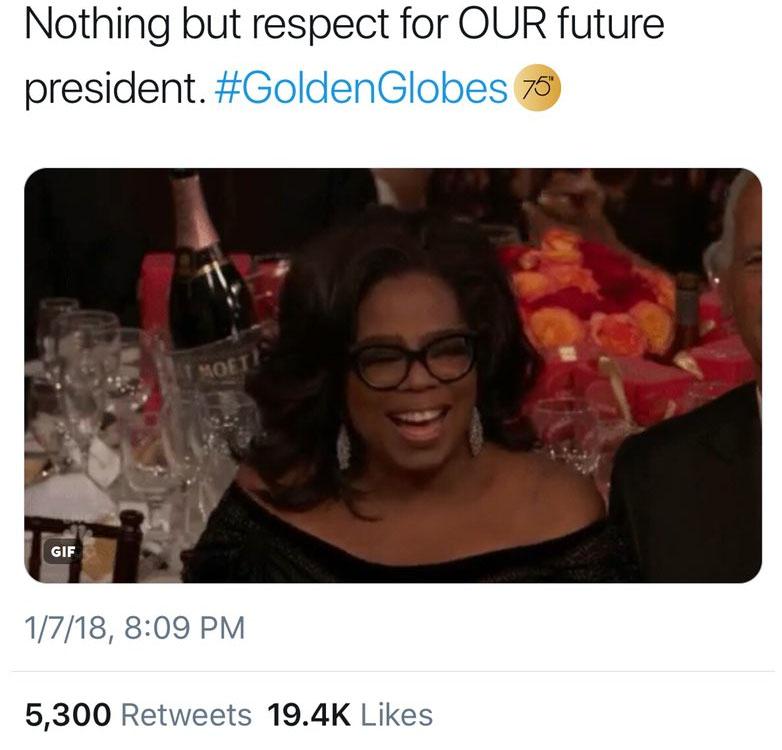 NBC tweeted the above to its 1.77 million followers after Golden Globes host Seth Meyers jokingly forbade Winfrey from running for president, noting he did the same with Donald Trump in 2011.

The tweet also prompted the now standard speculation about media bias and partiality.

In case anyone had any doubts about where the media stands this should take care of it. The bias against @realDonaldTrump is now so obvious they have simply given up hiding it.

Can you trust anything they say at this point?

Americans see the truth in job #s & in their wallets! https://t.co/uu4KbW82UO

When NBC tweeted Oprah pic with 'Nothing but respect for OUR future president,' did it mean she should be president of NBC? Of the United States? Of something else? All-caps OUR kind of confusing... https://t.co/Q3TDMAmKRz pic.twitter.com/2uKUBKnQ5O

I have watched every episode of the Oprah show in history, I credit her with saving my life, there is no bigger fan...so I feel I have some moral authority when I say that this is a strange tweet for a broadcast network. https://t.co/bH0pczGPtY

This tweet puts every reporter at NBC in a bad spot. Foolish thing for them to do. But at least now they are open about their bias. https://t.co/tIQtBodRkS

Then moments ago, instead of perpetuating the debate over just what NBC's intention was with the tweet, and unwilling to engage in a twitter war with Trump, NBC decided to simply apologize and be done with it, stating that the tweet was sent by a "third party agency", was "not meant to be a political statement" and that it has since deleted it:

Yesterday a tweet about the Golden Globes and Oprah Winfrey was sent by a third party agency for NBC Entertainment in real time during the broadcast. It is in reference to a joke made during the monologue and not meant to be a political statement. We have since removed the tweet.

Yesterday a tweet about the Golden Globes and Oprah Winfrey was sent by a third party agency for NBC Entertainment in real time during the broadcast. It is in reference to a joke made during the monologue and not meant to be a political statement. We have since removed the tweet.

Separately, as the debate over whether Oprah is running in 2020 rages, CNN reported that two of Oprah Winfrey’s close friends said that that the billionaire entertainment magnate is “actively thinking” about running for president in 2020. Some of Winfrey’s confidants have been privately urging her to run, but that she has not yet made up her mind, CNN reported.

In her Sunday night speech, Winfrey said that Hollywood needed to crack down on sexual harassment in the wake of revelations about several powerful Hollywood figures.

“For too long, women have not been heard or believed if they dared to speak their truth to the power of those men. But their time is up. Their time is up!” Winfrey said as she accepted the Cecil B. DeMille lifetime achievement award.

Winfrey’s speech earned widespread praise, with the hashtag #Oprah2020 quickly picking up steam on social media. However, as we noted earlier, in an interview after the show, Winfrey, 63, said she does not have plans to run for president.

Still, Winfrey’s longtime partner, Stedman Graham, told The Los Angeles that a campaign isn’t out of the question.

“It’s up to the people. She would absolutely do it,” he said.

Actress Meryl Streep told The Washington Post that Winfrey “doesn’t have a choice” but to declare a presidential run in the wake of her speech.  “I want her to run for president,” Streep said.