Over the weekend we showed  that while the US stock market has smashed virtually all records, some still remain: one is that while the S&P is rapidly approaching 400 days without a 5% correction, it still has several days to go before it breaches the 409 consecutive day record set on August 3, 1959. 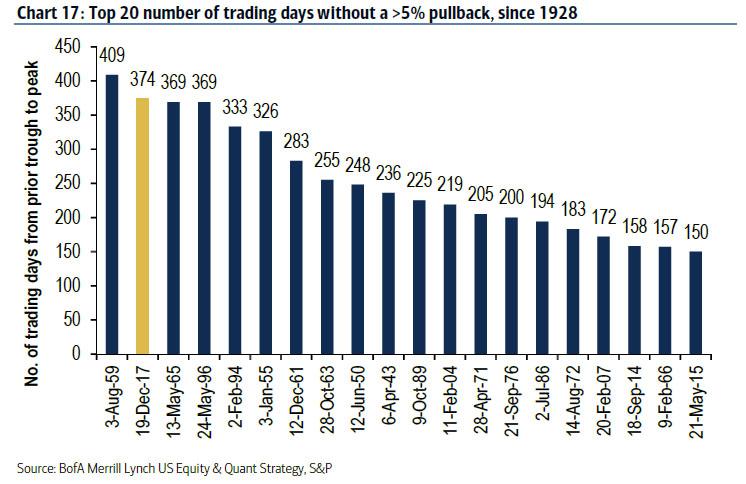 Seen another way, major US indexes haven’t been more than 5% from a 52-week high for nearly 400 days, another record which will be breached in just a few days.

Yet while equities may be on the cusp of record stretches without a correction in the US, in world markets these records are already in the history books. The reason for this, as Goldman explains in a note released today, is that global risk appetite for stocks has just hit an all time high.

So far this year, risk appetite has picked up materially (Exhibit 17), nearing its all-time high, led by equities (Exhibit 18), which have rallied across regions, the most in Asia and EM.

The underperformance of "safer" low vol stocks has also become pronounced. Credit total returns have been positive, in particular high yield, notwithstanding bonds selling off. Cross-asset volatility has fallen back to near its lowest levels, with equity skew also declining sharply.

What explains this unprecedented demand for risk with the market "screamingly overbought", at record high valuations, and at at a time when investors have seemingly forgotten how to sell? Well, as the following two charts show, traders no longer fear selloffs for the simple, if circular, reason that stocks simply do not sell off.

Which brings us to the first record: the MSCI World index is currently at its longest streak in history without a 5% correction... 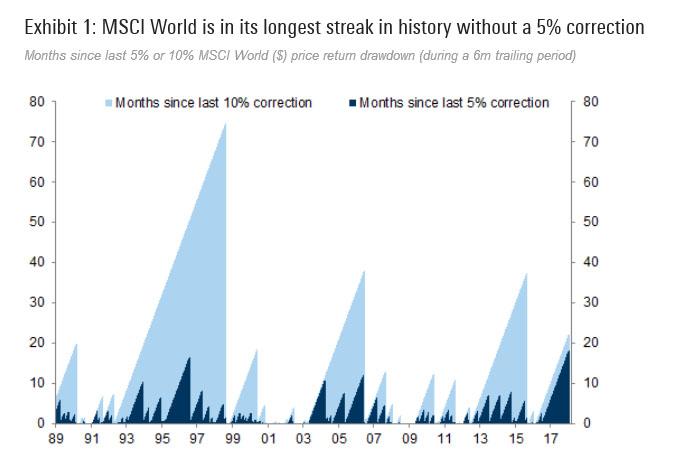 ... while, for record number two, we have the MSCI EM which is at its longest streak in history without a 10% correction. 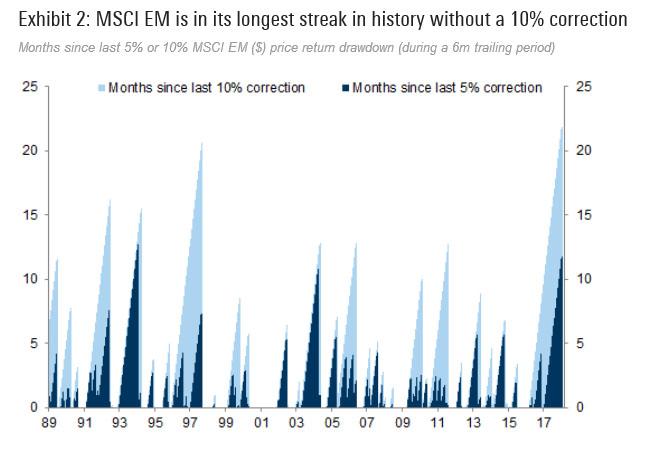 Is Goldman concerned by this record stretch without any sharp declines? Not really.

While we think equity correction risk in 2018 is high after a strong rally and at high valuations, we also think an equity bear market is unlikely given the supportive macro backdrop.

And why should it be concerned? As we first showed on Friday when the 2012 Fed transcripts were released to the public, both Goldman and retail investors have little to fear because as none other than the next Fed chair admitted, it is the Fed itself that is now "encouraging risk-taking":

I think we are actually at a point of encouraging risk-taking, and that should give us pause. Investors really do understand now that we will be there to prevent serious losses. It is not that it is easy for them to make money but that they have every incentive to take more risk, and they are doing so. Meanwhile, we look like we are blowing a fixed-income duration bubble right across the credit spectrum that will result in big losses when rates come up down the road. You can almost say that that is our strategy.

"Almost"... just as one can "almost" see this whole experiment in central planning having a happy ending.