Update: *TRUMP AIDE: WE WELCOME 2020 CHALLENGE FROM OPRAH OR ANYONE

Am I imagining that Oprah Winfrey launched her presidential campaign last night at the Golden Globes Awards? 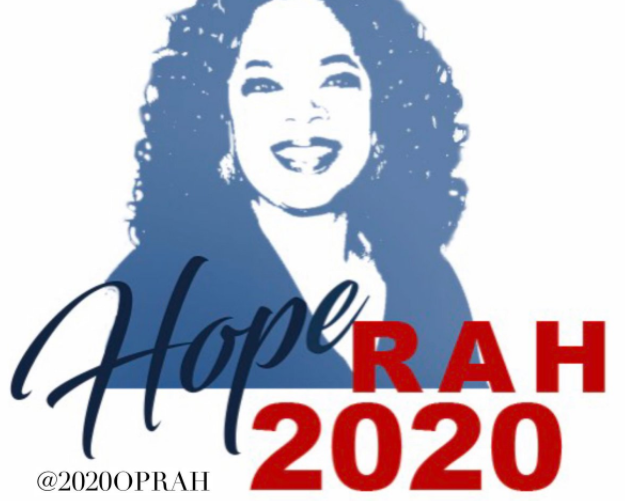 Well, why not? Unlike the Golden Golem of Greatness, skulking fiery and furious in his lonesome White House tweet chamber, Americans of all identity persuasions love Oprah. Unlike the president, who attained “stable [for now] genius” status without ever reading a book, Oprah displays real curiosity about this vexing and wondrous world, and an eagerness to engage with it. Unlike the maestro of the janky Trump brand, with his penchant for serial bankruptcy and stiffing the help, Oprah appears capable of running a business empire.

Let’s face it: the Democratic Party has no other figure of gravitas on the bench. Everybody trusts Oprah, probably even more than the erstwhile Barack Obama, with his dogged allegiance to Wall Street and his fifty percent taint of innate white male cis-hetero patriarchical depravity. Oprah might be the Democratic Party’s last best hope before it collapses into the mausoleum of US political history, where the Whigs, Free Soilers, and Anti-Federalists lie a’moldering.

Politics in this land has failed in its effort to become show business, while show business is succeeding wildly in its attempt to replace politics. All Washington can produce these days is a succession of tedious irresolvable soap operas. Hollywood is enacting a grand moral drama of clear-cut heroines and villains, victims and oppressors, sticking to archetypal story-line of our lifetime: the campaign for freedom, equality, and decency. Show business loves the desert sunshine; politics is mired in the Potomac swamp. Oprah even has better hair than the current occupant of 1600 Pennsylvania Avenue.

Oprah herself is an object lesson in the social and political themes that America dares not talk about: a person of humble origins who succeeded wildly in American life by signing onto a once-sturdy and now-fading common culture. In fact, Oprah probably embodies all that remains of American common culture, and the multitudes adore her for it. They are reassured to know that the binding verities still exist.

She moves in a realm where blackness and whiteness are emphatically irrelevant - which is surely a relief to people of good will who are sick of race-hustling from all quarters. Though she has credibly acted plenty of sharecropper roles in the movies, Oprah speaks English beautifully and doesn’t apologize for moving up from the ghetto patois of her rough childhood. She may not write all her own material — such as Sunday’s Golden Globes speech that may live on like MLK’s I Have a Dream oration — but she delivers her message with conviction. And who knows, maybe she did compose all or part of it.

One upshot of this is that Oprah might be capable of squaring the circle of America’s black-white racial quandary, which Mr. Obama could not accomplish: namely, restoring the idea that we have more in common as countrymen (countrypersons?) than the artificial barriers of the cultural Marxists falsely insinuate; that skin color, ethnic origin, religious order, and gender do not define adequately what we can be in the world, and maybe we would be better off putting those things aside and just work earnestly to bring out the best in ourselves without excuses..

This country is dying to put its house order. I daresay this is true of the great majority including the immiserated flyover folks who got snookered by Mr. Trump, and the big city hipsters who are coming into their years of power in the awful dimming of American prospects, and maybe even some of the suits in the corporate C-suits who still possess tattered memories of high school civics.

I’m not promoting Oprah for president, but just you watch: somebody will. It is going to happen.

The country faces enormous problems and predicaments, and the one-man soap opera at the center of it all is doing nothing but sucking all of the oxygen out of the room, leaving everybody else to choke and strangle.