Update (1605ET): Prices for some of the most popular cryptocurrencies dropped sharply Monday, with some such as Ripple suffering a flash crash, from which it however quickly rebounded. 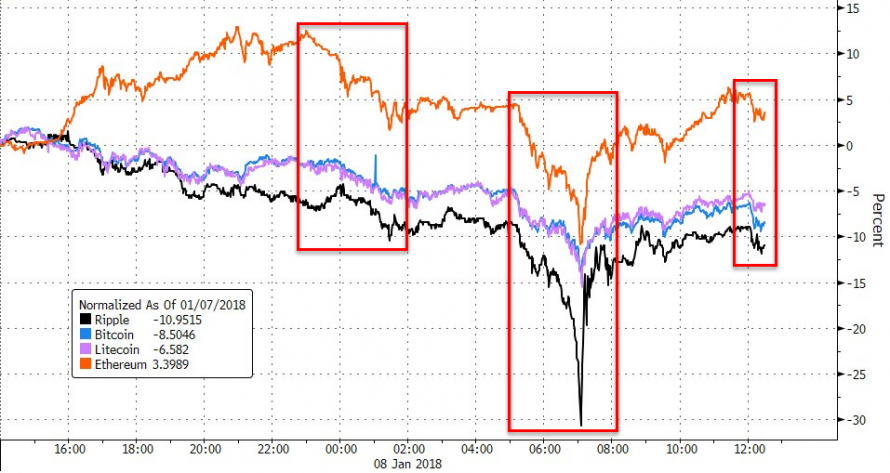 One apparent reason - according to the WSJ - for the sudden plunge: an adjustment from a popular website on its digital-currency price quotes.

The popular price-tracking website, coinmarketcap.com, on Monday removed data from some South Korean exchanges from its price quotes for a range of virtual currencies including bitcoin, Ethereum and Ripple’s XRP. The move followed a South Korean government crackdown on cryptocurrencies.

A representative of the website confirmed the moves in an email to The Wall Street Journal, citing “extreme price discrepancy” among South Korean exchanges. The company added in a tweet Monday afternoon that it “excluded some Korean exchanges in price calculations due to the extreme divergence in prices from the rest of the world and limited arbitrage opportunity.”

The sharp "repricing" - if only in the data feeds - following the discontinuance of Korean data sources, is shown in the coinmarketcap.com chart below: 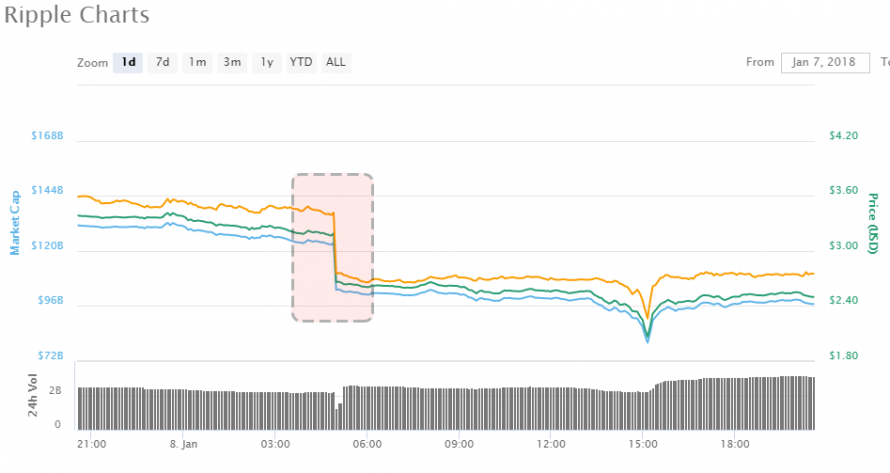 Without the Korean-exchange data, the XRP price fell to about $2.50, and at one point on coinmarketcap.com, fell below $2.10. On Ripple’s website, the company quoted XRP at $2.41, with its source being a weighted average of prices on the U.K. exchange Bitstamp.

That 'signal' from one exchange was picked up by the various algos and humans that trade crypto and triggered a mini flash crash on a number of other exchanges. But as the chart below shows, once the initial dump had finished, the machines recognized the lack of real offers and XRP was bid back up to unchanged relative to the pre-crash level. 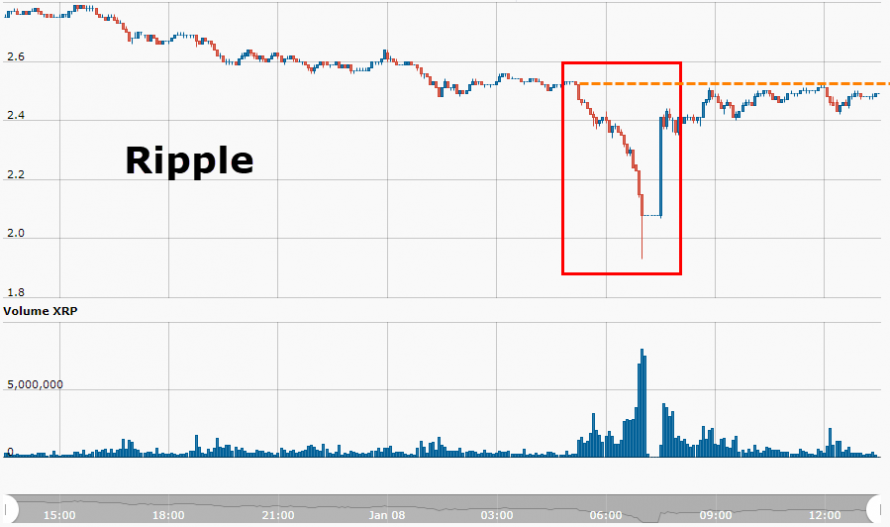 ... which however this time was completely unwarranted.

The reason the Korean price was dropped from the feed is because, as we have reported previously and as the WSJ confirms,  South Korea and Japan have become major markets for bitcoin and other cryptocurrencies, at the same time that China was clamping down on the sector. The flood of new money and enthusiasm in these countries led to price quotes that were higher, sometimes by hundreds of dollars, than on exchanges elsewhere. In Korea, this gap was nicknamed the “kimchi premium.”

In Japan, authorities embraced the sector, implementing rules for proper trading of bitcoin and other cryptocurrencies. In South Korea, though, the government has been more concerned with the potential for criminal activity tied to cryptocurrencies, and even retail investor losses amid a global mania and what many fear is a bubble in the sector.

More than $100 billion of the sector’s total market value was erased over the last 24 hours, according to the site. On Sunday, it stood at $835 billion. On Monday, it fell to as low as $683 billion, and lately was at $722 billion. And ironically, or perhaps patly, the catalyst behind these sharp price moves had nothing to do with actual, market-clearing, price.

The loss for Ripple is a gain for Ethereum which has now regained the 2nd spot in crypto market cap...

Update (1050ET): Ripple crashed down over 30% after the initial headlines then exploded back higher... and Ethereum is now unchanged on the day... 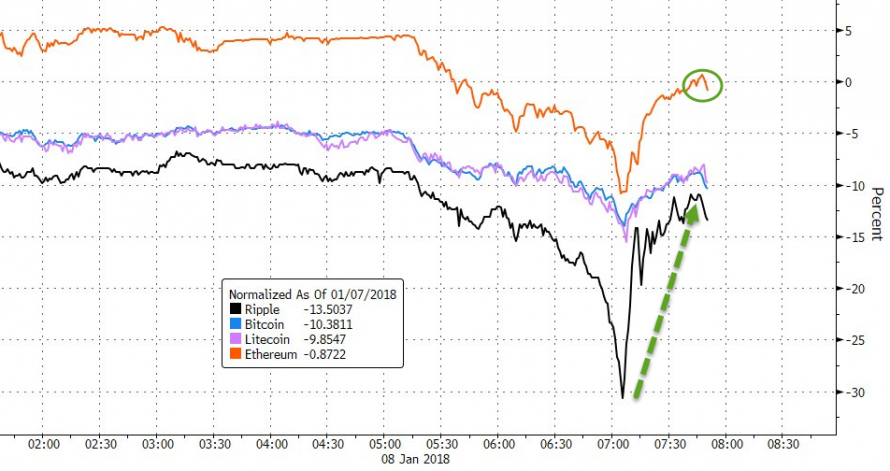 Amid headlines that South Korean regulators are inspecting 6 banks, including Industrial Bank of Korea, that provide virtual accounts to companies related to cryptocurrency, has sparked selling pressure across the entire space with Ripple down almost 20% today. 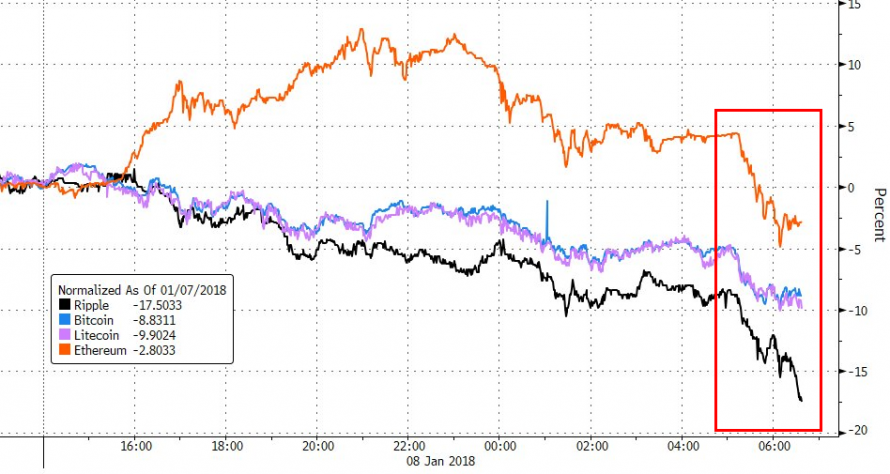 And the last few days have seen that Korean exuberance being smashed out of cryptos. 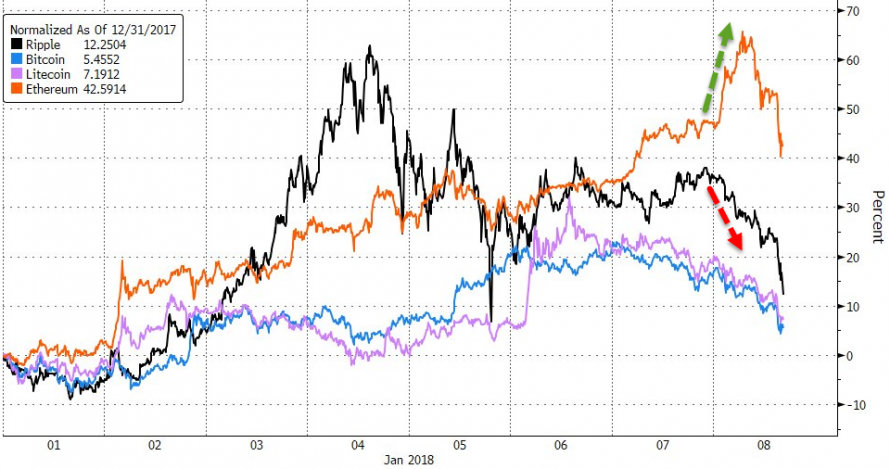 Ethereum remains the YTD winner for now, but as is clear Ripple quickly went from hero to zero as the volatile trading continues. 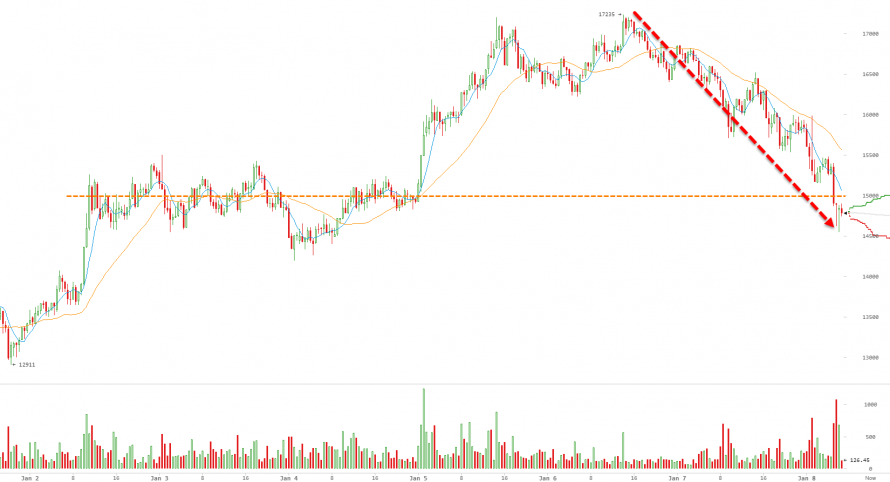 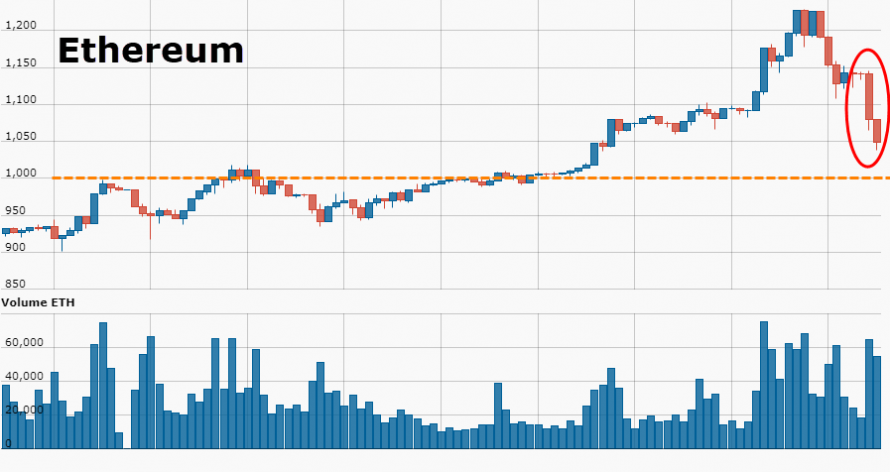 and Ripple is testing significant support... 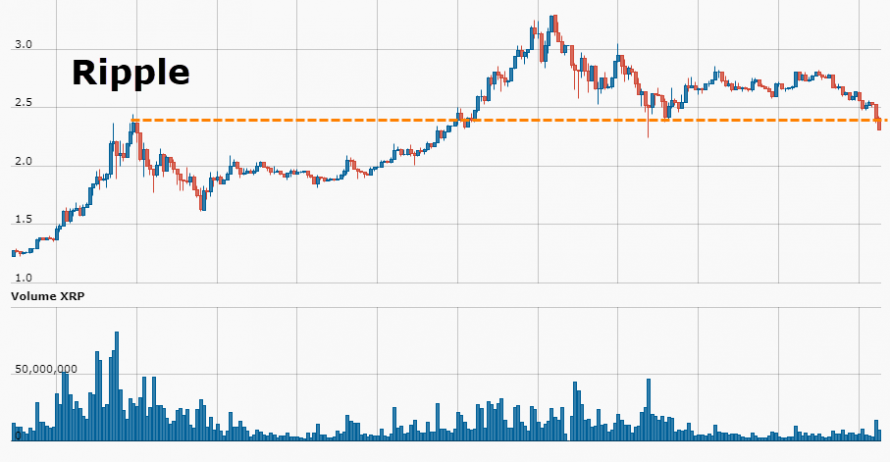 As CoinTelegraph reports, as speculative investments into Bitcoin and altcoins continue to trouble regulators worldwide, Korea has taken a hardline stance in recent months.

New legislation will seek to place heavy restrictions on how cryptocurrency exchanges can operate in the country, as well as who can use them and to what extent.

South Koreans will likely only be able to hold one exchange account linked to their real name, while tax obligations are also being overhauled regarding profits.

Reporting on the inspection, Yonhap News Agency appeared to forecast a predatory climate for exchanges.

What these “loopholes” might entail remains vague, yet the security setup of principal exchanges has come into the spotlight following an organized hacking attempt by a Korean news agency.