In an unusual move, two of Apple's largest shareholders, Jana Partners, a large activist hedge fund, and the California State Teachers’ Retirement System (CalSTRS) penned a letter to the company over the weekend saying the smartphone maker needs to respond to what some see as a growing public-health crisis of youth phone addiction.  Among other things, the pair, which control some $2 billion worth of Apple shares, urged the company to develop new software tools that would help parents control and limit phone use more easily and to study the impact of overuse on mental health.

By doing so, we believe Apple would once again be playing a pioneering role, this time by setting an example about the obligations of technology companies to their youngest customers.  As a company that prides itself on values like inclusiveness, quality education, environmental protection, and supplier responsibility, Apple would also once again be showcasing the innovative spirit that made you the most valuable public company in the world.  In fact, we believe that addressing this issue now will enhance long-term value for all shareholders, by creating more choices and options for your customers today and helping to protect the next generation of leaders, innovators, and customers tomorrow.

Adding to the extreme irony of the letter, Jana and CalSTRS go on to highlight a series of studies which suggest that Apple products are literally killing the kids who use them and/or resulting in extreme bouts of depression or physical ailments from a lack of exercise.  All of which would typically send investors running for the hills but apparently not in this specific case.

A study conducted recently by the Center on Media and Child Health and the University of Alberta found that 67% of the over 2,300 teachers surveyed observed that the number of students who are negatively distracted by digital technologies in the classroom is growing and 75% say students’ ability to focus on educational tasks has decreased. In the past 3 to 5 years since personal technologies have entered the classroom, 90% stated that the number of students with emotional challenges has increased and 86% said the number with social challenges has increased.  One junior high teacher noted that, “I see youth who used to go outside at lunch break and engage in physical activity and socialization.  Today, many of our students sit all lunch hour and play on their personal devices.”

This research also shows that 8th graders who are heavy users of social media have a 27% higher risk of depression, while those who exceed the average time spent playing sports, hanging out with friends in person, or doing homework have a significantly lower risk.  Experiencing depression as a teenager significantly increases the risk of becoming depressed again later in life.

Also, teens who spend 5 or more hours a day (versus less than 1) on electronic devices are 51% more likely to get less than 7 hours of sleep (versus the recommended 9).  Sleep deprivation is linked to long-term issues like weight gain and high blood pressure.

According to an American Psychological Association (APA) survey of over 3,500 U.S. parents, 58% say they worry about the influence of social media on their child’s physical and mental health, 48% say that regulating their child’s screen time is a “constant battle,” and 58% say they feel like their child is “attached” to their phone or tablet. 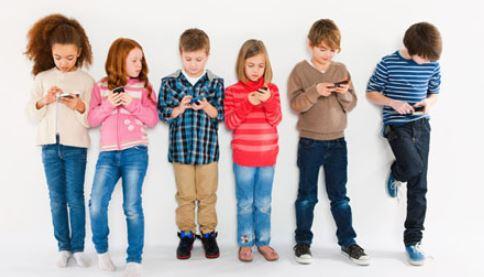 Of course, this is all part of a new theme in our growing nanny state which suggests that technology companies bear some responsibility for regulating how their products are used...you know, because grown adults can't possibly be expected to make responsible decisions for themselves or their children when it comes to social media usage.

As we pointed out just a few weeks ago, former Facebook executive, whose job it was to literally get the world hooked on the "internet crack" that is social media, made a similar plea when he called on people to take a "hard break" from the service which he now believes is "ripping apart the social fabric of how society works."  Speaking to a group of students at the Stanford Graduate School of Business, Chamath Palihapitiya, who joined Facebook in 2007 and became its vice president for user growth, said that he feels "tremendous guilt" for his role in building the social media giant and warned  that "if you feed the beast, that beast will destroy you..." (you can view the relevant portion of the interview here).

"I think we have created tools that are ripping apart the social fabric of how society works. That is truly where we are."

"I would encourage all of you, as the future leaders of the world, to really internalize how important this is.  If you feed the beast, that beast will destroy you.  If you push back on it you have a chance to control it and reign it in."

"The short-term, dopamine-driven feedback loops we've created are destroying how society works.  No civil discourse, no cooperation; misinformation, mistruth. And it's not an American problem — this is not about Russians ads. This is a global problem."

"So, we're in a really bad state of affairs right now, in my opinion.  It is eroding the core foundations of how people behave by and between each other."

Of course, as the Wall Street Journal notes, JANA Partners, to our complete shock, just might have other motivations behind their letter than their unwavering commitment to the health and safety of your children.  Perhaps it has something to do with that "several-billion-dollar" hedge fund that Jana is seeking to raise this year to help companies be "better corporate citizens" (but certainly nothing to do with the millions in fees that Jana will receive in return).

The Apple push is a preamble to a new several-billion-dollar fund Jana is seeking to raise this year to target companies it believes can be better corporate citizens. It is the first instance of a big Wall Street activist seeking to profit from the kind of social-responsibility campaign typically associated with a small fringe of investors.

Adding splash, rock star Sting and his wife, Trudie Styler, will be on an advisory board along with Sister Patricia A. Daly, a nun who successfully fought Exxon Mobil Corp. over environmental disclosures, and Robert Eccles, an expert on sustainable investing.

What better way to market your new fundraising effort than by invoking the name of one of the most recognizable companies on the planet while simultaneously asking for money to literally save the lives of children the world over...well played, Jana...well played.