Hillary Clinton's chief of staff, John Podesta, received an email from an advisor which brought up the phrase "gross negligence" in regards to the FBI's email investigation before the FBI agent in charge of the probe removed the phrase from her exoneration statement, according to WikiLeaks. 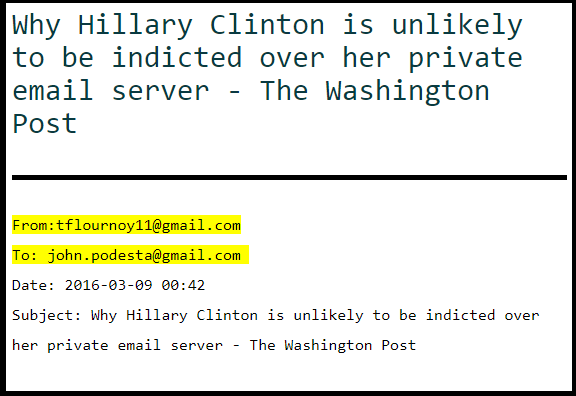 In a March 2016 email from former Bill Clinton Chief of Staff Tina Flournoy to Clinton campaign chairman Podesta's Gmail account, Flournoy included links to two articles concerning the FBI email investigation; one from the Washington Post which minimized Clinton's actions, and a legal analysis from retired D.C. attorney Paul Mirengoff in which he suggests Clinton was "grossly negligent or worse" and may be in serious hot water. (h/t Mike)

From Mirengoff in Powerline Blog:

The only other question I perceive that stands in the way of Clinton having violated Section 793(f) is whether it was through gross negligence that she permitted the information relating to the national defense to to be removed from its proper place of custody or delivered to someone who shouldn’t have gotten it.

It was not ordinary negligence that caused Clinton to permit highly sensitive information to be removed from its proper place and onto Clinton’s private email servers. This strikes me as gross negligence at a minimum. Clinton herself had warned others about the prospect of private email accounts being hacked.

Nor was it ordinary negligence to deliver highly sensitive information to someone lacking a security clearance (in this case, an inveterate gossip). Such imprudence, again, seems grossly negligent or worse. -Powerline Blog

"The argument here would be that Clinton engaged in such “gross negligence” by transferring information she knew or should have known was classified from its “proper place” onto her private server, or by sharing it with someone not authorized to receive it. Yet, as the Supreme Court has said, “gross negligence” is a “nebulous” term. Especially in the criminal context, it would seem to require conduct more like throwing classified materials into a Dumpster than putting them on a private server that presumably had security protections." -Tina Flournoy to John Podesta (WikiLeaks)

Perhaps Podesta decided to run this past Hillary Clinton's friends at the FBI, as counterintelligence agent Peter Strzok - who headed up the Clinton email investigation - then removed the phrase "gross negligence" from Clinton's exoneration statement. 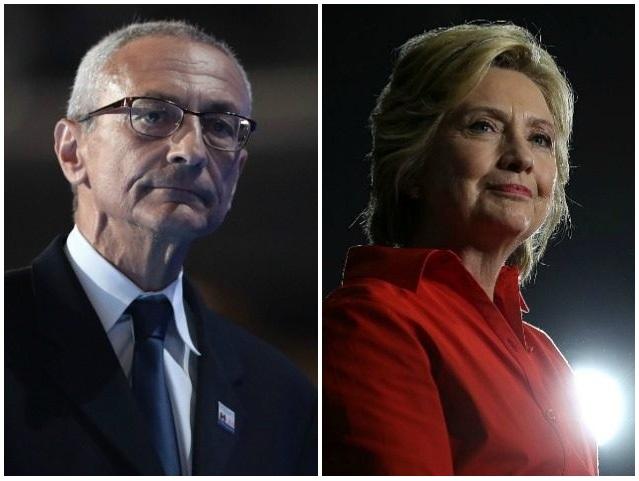 To summarize, former Bill Clinton Chief of Staff Tina Flournoy sent John Podesta an email to his Gmail account on March 9, 2016 - with a Washington Post article containing a link to an opinion by a retired D.C. attorney who thinks Clinton committed Gross Negligence. Former FBI Director James Comey's original draft from May 2, contained the phrase, and at some point over the next eight weeks, Peter Strzok - the man who headed up the investigation, removed it - materially changing the legal significance of Clinton's actions, effectively "decriminalizing" her behavior when Comey gave his speech on July 5, 2016.

One wonders if the Office of the Inspector General (OIG) has reviewed this tidbit of information as part of their upcoming report about to be submitted to the Attorney General Jeff Sessions and Congressional investigators - which in all likelihood, assuming their findings are in alignment with recent bombshells, will be the basis for the appointment for a second special counsel and much, much more.