3-Year Auction Prices At Highest Yield Since May 2007

The rapidly rising yields on short-term TSY auctions is making them increasingly attractive to investors, as the just concluded strong sale of $24 billion in 3Y paper - the first note auction of 2018 - demonstrated.

As Bloomberg notes, summarizing sellside sentiment, the auction was expected to offer "outright value and some concession on the fly against immediate peers, though a perceived inflation pickup could have limited demand for the issue as odds of Fed rate hike in March advance."

And sure enough, the demand was there. The only potential weakness was the drop in Indirects, which dropped from 59.0% in December to 54.9% in january, if in-line with the 6 month auction average. Directs were awarded 11.5% of the final takedown, the highest since July 2016 and above the 6 month average of 9.0%, leaving Dealers holding 33.6% of the auction, the same as December, and just below the 6MMA of 36.1%.

Overall, this was a very strong auction and hardly indicative of a Treasury bull market tombstone, as Bill Gross declared earlier. 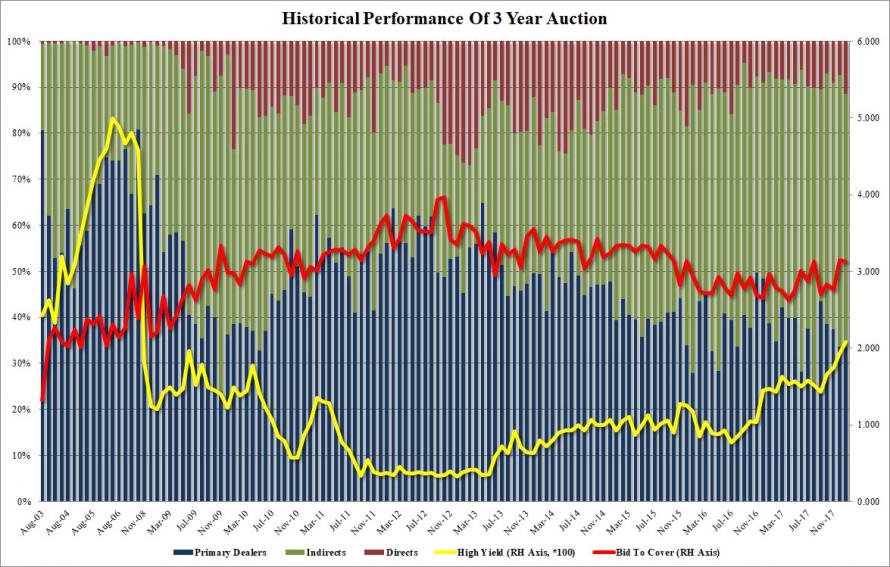