Just four days after two GOP Senators asked the DOJ to launch a criminal probe  of Christopher Steele, the ex-MI6 British spy who was the author of the Trump dossier, and which according to many served as the basis for the Russian collusion probe, on Tuesday afternoon Senator Dianne Feinstein circumvented her Republican colleagues on the Senate Judiciary Committee Tuesday and unilaterally released the full 312-page transcript  of the committee's closed-door interview with Glenn Simpson, a former journalist and co-founder of Fusion GPS, which commissioned the controversial Donald Trump's dossier about alleged connections with Russians. 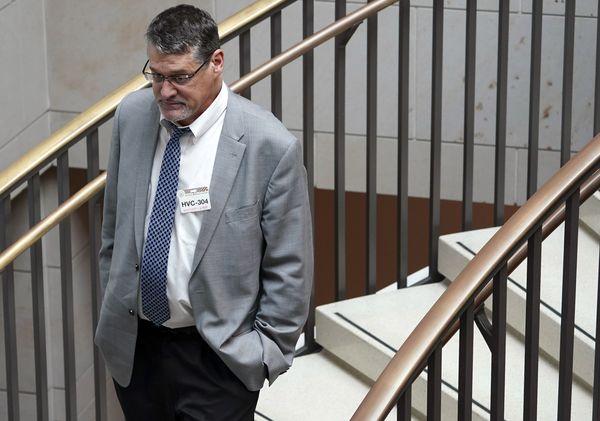 The unexpected release, which came after a tense back-and-forth between Republicans and Democrats over what to do with the transcript of Simpson’s interview, follows Fusion GPS' demand last week that the full transcript be released, sparking a fight with Judiciary Chairman Chuck Grassley (R-Iowa) over who was standing in the way of the document being released. The Senate Judiciary Committee interviewed Simpson on August 22, 2017 as part of its investigation into Russia's election interference.

That confrontation heated up last week after Simpson and his Fusion GPS co-founder Peter Fritsch penned an op-ed in The New York Times calling on the three congressional committees who have interviewed Fusion GPS employees to release transcripts of the interviews. Grassley, the chairman of the Senate Judiciary Committee, balked at the idea, saying that the transcript needed to remain confidential while the panel is interviewing other witnesses.

Curiously, Virginia Sen. Mark Warner, the top Democrat on the Senate Intelligence Committee, which has also interviewed members of Fusion GPS, also appeared to back Grassley’s rationale last week. He said that he would like Fusion partners to appear for public testimony.

In a statement, Feinstein said that she released Simpson’s testimony after conferring with her fellow committee Democrats.

“The American people deserve the opportunity to see what he said and judge for themselves. The innuendo and misinformation circulating about the transcript are part of a deeply troubling effort to undermine the investigation into potential collusion and obstruction of justice. The only way to set the record straight is to make the transcript public.”

Needless to say, Grassley was furious after Feinstein's publication, stating that it is "totally confounding that Senator Feinstein would unilaterally release a transcript of a witness interview in the middle of an ongoing investigation" and that "Her action undermines the integrity of the committee’s oversight work and jeopardizes its ability to secure candid voluntary testimony relating to the independent recollections of future witnesses."

Taylor Foy, a spokesman for Judiciary Chairman Chuck Grassley, blasted Feinstein’s decision to release the transcript unilaterally, saying it could reduce the prospects for other witnesses, such as Trump’s son-in-law, Jared Kushner, to agree to meet with the panel.

“Her action undermines the integrity of the committee’s oversight work and jeopardizes its ability to secure candid voluntary testimony relating to the independent recollections of future witnesses,” Foy said in an emailed statement.

There are some snarkier takes on the Fusion GPS demand to have the transcript released: as Sean Davis of the Federalist notes, "At the demand of Fusion GPS, @SenFeinstein put Fusion GPS's testimony on her website. In the interest of transparency. While redacting the names of Fusion's partners. Amazing."

At the demand of Fusion GPS, @SenFeinstein put Fusion GPS's testimony on her website. In the interest of transparency. While redacting the names of Fusion's partners. Amazing. pic.twitter.com/Iergk8c9Bc

Even though the interview was unclassified, the transcript released by Feinstein redacts the names of Fusion GPS's partners and the names of federal officials contacted by Christopher Steele. pic.twitter.com/DZTIosaeGe

As Davis also adds, "It's almost like Fusion GPS was more interested in aligning future DOJ witness testimony with its own claims than it was with actual transparency."

As for Simpson, he has emerged as the central figure in the probes into Russian election interference after his firm helped assemble a controversial dossier tying President Trump to Russia. Former British spy Christopher Steele compiled the document, which includes unverified allegations against Trump and his links to Moscow.

As Bloomberg adds, Republicans and Democrats tangled in recent weeks over the origins of the dossier, which was funded in part by Trump’s political opponents, and how the FBI and other agencies may have used the dossier in their investigations.

“The innuendo and misinformation circulating about the transcript are part of a deeply troubling effort to undermine the investigation into potential collusion and obstruction of justice," Feinstein said in a statement. “The only way to set the record straight is to make the transcript public.”

The full transcript details Glenn Simpson's August 22 interview. It shows that Simpson told the Senate Judiciary Committee that the author of the dossier, former British spy Christopher Steele, decided to approach the FBI in July 2016 to brief the bureau on his findings about Trump.

"He thought from his perspective there was an issue -- a security issue about whether a presidential candidate was being blackmailed,” Simpson said. He added that when Steele met with an FBI official in September, the official told Steele the bureau "had other intelligence about this matter from an internal Trump campaign source."

The marathon conversation between Simpson and lawmakers touched on delicate territory while leaving tantalizing details hanging, including the identity of a person inside the Trump circle who Simpson says provided information to U.S. investigators. Simpson, a former journalist who co-founded Fusion GPS, denied strongly in the interview that the dossier was phony.

“We can argue about what’s prudent and what’s not, but it’s not a fabrication,” he said.

Simpson also told the committee that he became increasingly concerned about potential Trump connections to Russia during the summer of 2016. “To me this was like, you know, you’re driving to work and you see something happen and you call 911, right,” Simpson said.

Over that period, he said, “the situation with the hacking of the Democrats and the efforts by the Russians to influence the election and the possibility the Trump Organization was, in fact, doing things to curry favor with the Russians became more and more serious, as external developments occurred.”

Asked what he meant, Simpson pointed to Carter Page, a Trump campaign foreign policy adviser who showed up in Moscow to give a speech; unexplained changes to the Republican Party platform ahead of the GOP convention; and that Trump “continues to say mysterious things about what a great guy Putin is.”

Simpson said he had asked Steele at one point during the summer of 2016 if he’d ever heard back from the FBI following that initial July meeting “because it was obvious there was a crime in progress.” Simpson said the crime he was referring to was “espionage -- they were hacking into the computers of Democrats and think tanks.”

As is widely known, Fusion was initially hired by conservative website, Washington Free Beacon, during the Republican primaries to dig up dirt on Trump. Later in the 2016 presidential campaign, Trump’s opponent Hillary Clinton and the Democratic National Committee paid Fusion GPS through a law firm for some of the research that resulted in the dossier.

But as Bloomberg notes, in the August interview, Simpson and his lawyer, asked repeatedly who commissioned research into the presidential candidate, declined to name them.

Simpson also demurred when asked to provide specifics about people who provided information to Steele. The ex-intelligence official was adept at gleaning information about Russia, where disinformation is a known pitfall, Simpson said. When Simpson was asked to detail steps Steele took to verify his sources’ credibility, his lawyer cut in to stop the line of questioning.

The 35-page report drew on information from Russian contacts and concluded that Russia had been “cultivating, supporting and assisting” Trump for at least five years and fed his campaign “valuable intelligence” about Clinton.

Trump has derided the findings, as recently as Dec. 26 when he wrote on Twitter: “‘Dossier is bogus. Clinton Campaign, DNC funded Dossier. FBI CANNOT (after all of this time) VERIFY CLAIMS IN DOSSIER OF RUSSIA/TRUMP COLLUSION. FBI TAINTED.’ And they used this Crooked Hillary pile of garbage as the basis for going after the Trump Campaign!”

Finally, and speaking of transparency, see if you can spot it in the examples below:

Fusion GPS just wants transparency and to tell its story, y'all. Just as long as that story doesn't involve its partners, staff, clients, contractors or their FBI contacts. pic.twitter.com/yc5zm3ShBk

I'm overwhelmed by Fusion GPS's commitment to transparency before Congress in its dealings with campaigns and shady foreign actors. pic.twitter.com/4WWBRot76n

Fusion GPS: We want to tell our story!
Congress: Who paid you to dig up dirt on Trump?
Fusion GPS: lol so not going to answer that get real pic.twitter.com/pg3mtu9eXl

When asked by Congress if Fusion was a "Democrat-linked firm," Glenn Simpson said that was not accurate. The reality? He was hired by the DNC and Hillary Clinton. pic.twitter.com/k2GMgtRYhj

Glenn Simpson says they treated the dossier the same way Wolff treated his Trump book. "You don't really decide who's telling the truth," only if the story rings true. pic.twitter.com/TFOknownor

Additionally, as the Daily Caller's Chuck Ross reports, according to Simpson, "the 1st dossier memo -- the one about the pee tape -- was essentially unusable and unprovable."

Glenn Simpson saying that the 1st dossier memo -- the one about the pee tape -- was essentially unusable and unprovable. pic.twitter.com/Q8c16J9Ll4

As noted above, according to the transcript, Steele said that he approached the FBI because he believed there were issue involving national security:

Fusion GPS: Steele went to the FBI because he believed there were issues involving US national security pic.twitter.com/WGRQwLLyqo

Steele also said he went to the FBI, worried that Trump was being blackmailed

Fusion GPS: Steele went to the FBI, worried that Trump was being blackmailed pic.twitter.com/hYTpoL58fB

Ironically, Steele said he stopped dealing with FBI just before 2016 election, worried FBI "was being manipulated" by 'Trump people.'

... With Steele later suggesting that the FBI had a source inside the Trump organization.

Fusion GPS: Steele indicated that the FBI had a source inside the Trump organization pic.twitter.com/i3EzHUNGZL