The Swiss National Bank Made $55 Billion In Profits Last Year, More Than Apple, JPM And Berkshire

With a total return of over 22%, the S&P 500 shrugged off international and domestic strife, disappearing trading volumes and three Federal Reserve interest-rate hikes to put in its best annual performance since 2013. And while the rising tide lifted all boats - even long-short equity funds returned 10%, if still underperforming the S&P - the Swiss National Bank, essentially one of the world's biggest government-backed hedge funds (second only to the ECB) with a taste for megacap US tech stocks, had one of its best years in recent memory. 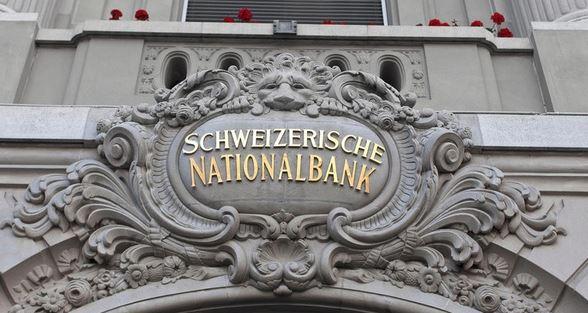 And, as the SNB reported overnight, the SNB’s purchases of foreign stocks and bonds netted it a hefty profit in 2017, if only on paper. As has been duly reported here for years, to prevent the Swiss franc from strengthening dramatically, the SNB prints francs (out of thin air) and injects them into the international market. The foreign currency it receives in exchange for its francs are used to buy - you guessed it - bonds but mostly stocks. 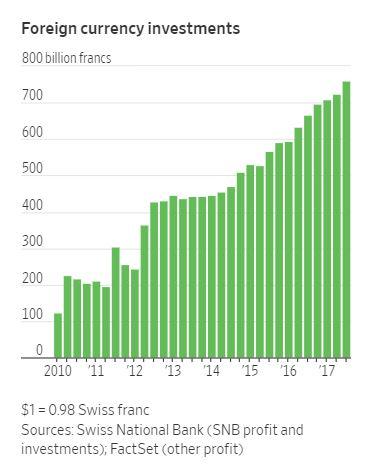 But while it has long been known that the SNB, along with the BOJ, directly purchase equities and ETFs in the open market, what was stunning in the SNB's statement is that it expects to report an annual return of 54 billion francs ($55 billion) - a sum equivalent to 8% of Switzerland’s GDP.  As the WSJ observes, this amount is greater than the annual profit at Apple, J.P. Morgan, Berkshire, Wells or Microsoft. 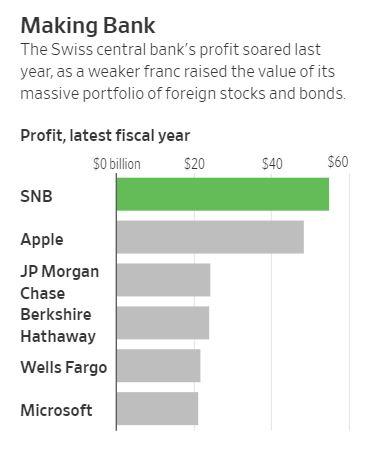 By comparison, the Fed has earned an annual profit of about $100 billion in recent years, although the SNB's return is equivalent to a much larger slice of its GDP, as a result of the different types of asset holdings: the Fed is long Treasurys and MBS while the SNB has been buying pretty much everything, including tens of billions in US stocks.

In its latest release, the SNB also reported that it has accumulated about 760BN francs in foreign bonds and stocks through years of foreign-exchange interventions, particularly during Europe’s debt crisis, in which it created francs and used them to purchase foreign assets in a bid to weaken the currency.

As the WSJ puts it, with just the right amount of snark, "Switzerland got a lot wealthier in 2017, thanks to its central bank’s emergence as a major money manager with a near $800 billion portfolio of foreign stocks and bonds." More:

The Swiss National Bank said Tuesday it expects to report a record annual profit of 54 billion Swiss francs ($55 billion) for last year—a staggering sum equal to 8% of the country’s entire gross domestic product...  The profit is gargantuan. It is more than Apple earns in a year, and more than JPMorgan Chase & Co. and Berkshire Hathaway Inc. combined. Those are all giant, world-spanning corporations. The SNB employs about 800 people. Its chairman—among the best-paid central bankers—earns about $1 million a year.

The SNB is one of the few central banks with listed shares. Its share price more than doubled last year, and was up nearly 3% midday Tuesday.

Of course, this isn't a real "profit" as the Swiss can’t spend this massive windfall. Obviously, booking the profits would require the SNB to sell some of its foreign bonds and stocks that included nearly $3 billion in Apple stock and $1.5 billion in Facebook at the end of the third quarter.

So what does the SNB do? Well, while central banks like the Federal Reserve transfer most of their profits to their governments, the SNB is in the early stages of a five-year profit-sharing arrangement whereby the maximum amount it can transfer to the Swiss federal and regional governments is just two billion francs a year.

That agreement runs until 2020.  In other words, the SNB is hoping that the market does not crash in the next 2 years or else all those accrued profits will become instant losses.

So what stocks did the SNB buy in recent months? Unfortunately, the SNB’s 13-F for Q4 won’t arrive for another month, but during Q3, the central bank went on yet another buying spree, boosting its total holdings of US stocks to an all time high of $87.8 billion, up 4.2%, or $3.5 billion, from $84.3 billion at the end of the second quarter.

Unlike the Fed, ECB and BOJ, the SNB’s balance sheet is overwhelmingly comprised of foreign assets, exposing it to significant foreign exchange risk. Avoiding paper losses due to FX risk is just another incentive for the central bank to keep printing francs and accumulating more foreign assets. The weaker the franc, the higher the central bank’s return, which means any time your P&L goes against you... why you just print some more fiat and buy stocks with it.

The euro strengthened nearly 10% against the franc last year. Euro-denominated assets are the largest currency holding of the SNB, followed by the dollar.

The SNB hasn’t reported a loss since 2015, when it abandoned its ceiling for the franc-euro exchange rate, causing the franc to massively and rapidly appreciate. It ended the year with a 23 billion franc loss.

Meanwhile, as we showed last quarter, this is a breakdown of the SNB's US stock holdings, which have more than doubled in the past 2 years. 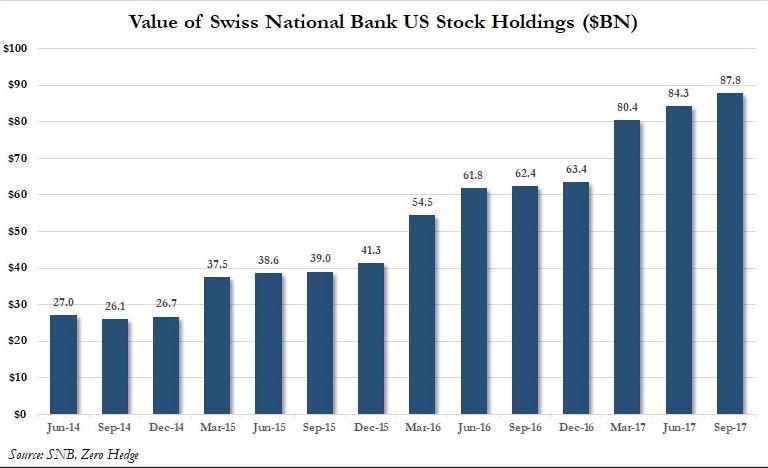 While one might assume that these gains will somehow benefit the Swiss people, the SNB is currently in a profit sharing arrangement with the Swiss government that caps the government’s share of profits at 2 billion francs. The agreement runs until 2020. 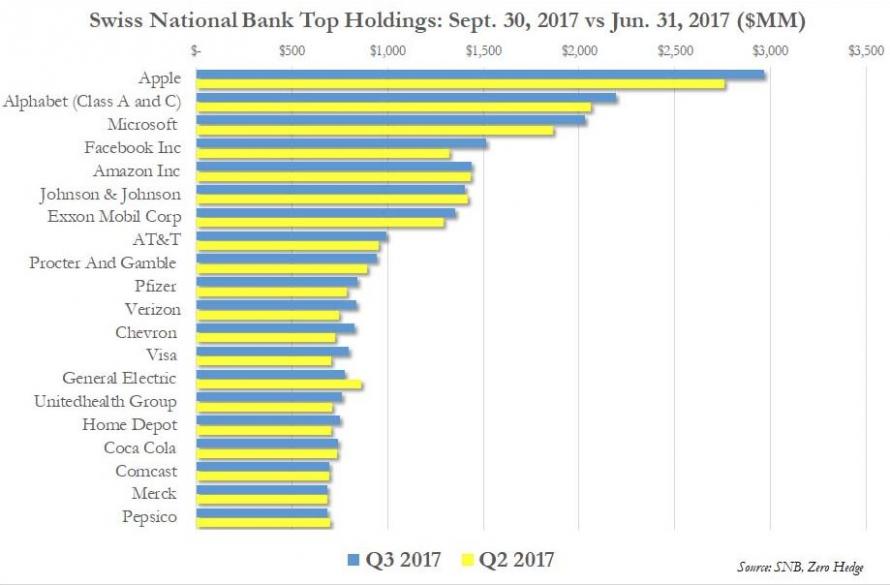 Under the agreement, private shareholders will receive a small return - CHF1.5 million annually. These shareholders have little say over how the bank is run, but it’s important to understand that private investors can buy shares in the SNB as they would any other Swiss stock. Though the central bank is mostly owned by Swiss states, known as cantons, and cantonal banks. 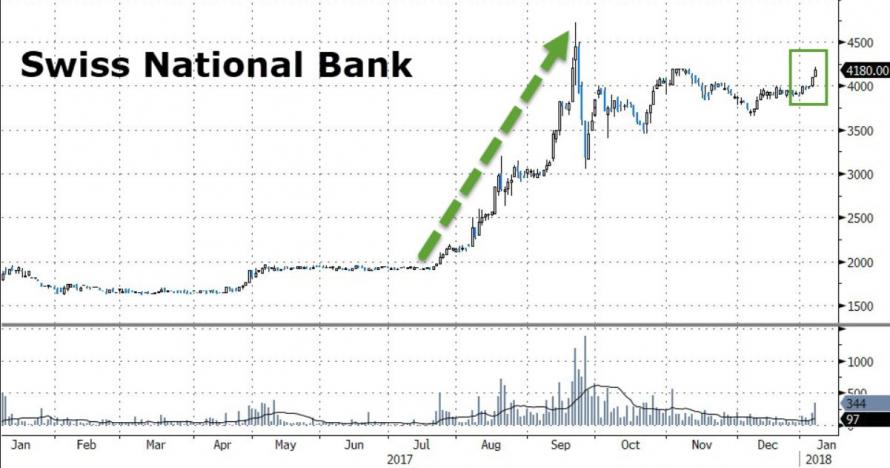 According to WSJ, the SNB said it would allocate about five billion francs to its provisions that guard against future fluctuations in exchange rates. The rest of its paper profits will go to a distribution reserve to ensure that the SNB can still make future payouts even in the event of a loss.

And nowhere are the SNB's profits tied more closely than to the fate of Apple stock, which remains the SNB's top investment. 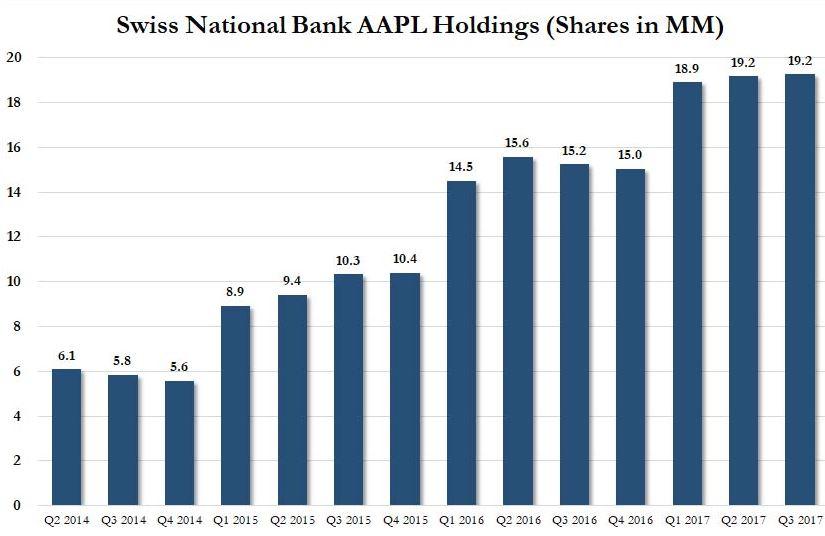 As we showed a few months ago, the central bank increased its Apple stake to 19.2 million shares, making it a larger holder of AAPL stock than Schwab and Franklin Resources and just behind Janus with 20 million shares. One can’t help but wonder if the SNB continued buying Apple during the fourth quarter, helping lift the broader Nasdaq pushing it above 7,000.

As central banks talk about reeling in their monetary stimulus - the Fed expects to raise interest rates three more times this year while tapering its balance sheet, while the ECB has already started to decrease the size of its purchases - the SNB remains a notable outlier. Because when you’re racking up profits like the SNB is, what incentive is there to change one’s behavior.

Finally, if you’re printing the money that you’re playing with, where is the risk, and why even pretend that the world still has "efficient and rational" capital markets?