The Swiss Franc And The Euro: What Now?

Authored by Mihai Macovei via The Mises Institute,

In January 2015, the Swiss National Bank (SNB) unexpectedly removed the de facto peg of the franc to the euro. The move was welcomed by free-market economists, including in contributions on Mises Wire. It was deemed that the short-run adjustments to the Swiss economy triggered by the appreciation of the franc were preferable to the macro-economic stability risks posed by the inflation imported from the euro area during the peg. 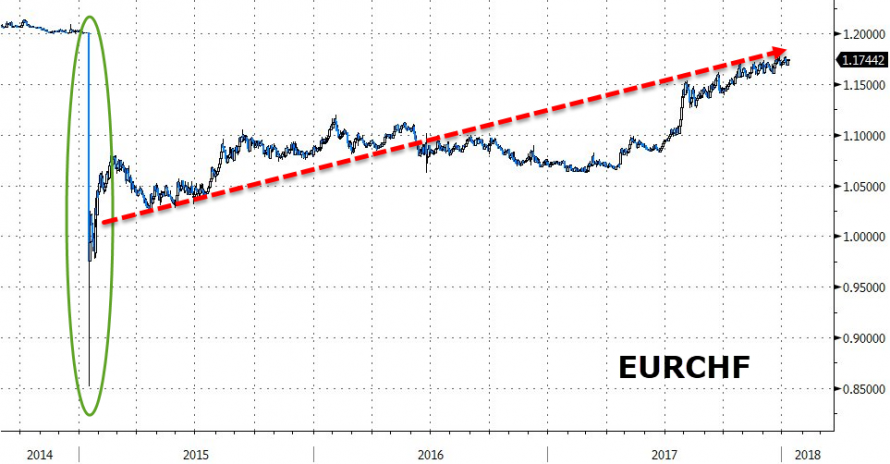 Yet, it would have been difficult to anticipate that the SNB's interventionist monetary policy would continue aggressively also after the peg.

Let's give some background.

Since the onset of the Great Recession, investors flocked into the Swiss franc as a safe haven asset. They feared that ultra-loose monetary and fiscal policies would damage the quality of most other major currencies. Significant net financial inflows to the tune of CHF 460bn (70% of 2016 GDP) made their way into the alpine economy as a repatriation of bank deposits. Simultaneously, large current account surpluses amounting to about CHF 600bn were recorded. More than half of the external inflows were purchased by the SNB in order to limit the appreciation of the franc and help exporters. It led to a vast increase in foreign reserve assets of about CHF 690 bn. The SNB also reduced aggressively its interest rates to negative levels, surpassing both the Fed and the ECB.

The extremely large scale of SNB monetary interventions, not only during, but also outside of the peg, has probably been less obvious to most observers. Helped by the negative interest rate differential, the monthly average of external financial inflows dropped into half during the peg (left chart below). Nevertheless, the SNB's FX purchases - measured as the change in foreign reserves – absorbed almost fully the external inflows. After the peg, SNB's FX purchases declined to about 60% of foreign inflows, but the average monthly increase in reserves declined by only 20% in absolute terms vs. the peg. This shows that the unpegging of the franc was followed by heavy SNB monetary interventions. At the same time the domestic liquidity absorbed by the SNB increased significantly after the unpegging of the franc.

Source: SNB and own calculations (based on quarterly data for the BoP and monthly data for SNB reserves and deposits)

Despite the massive FX purchases, the franc still appreciated by about 45% in nominal terms against the euro from mid-2007 to September-2017 (see the right chart above). In real terms, the appreciation was lower at about 27% in terms of CPI because of a favorable inflationary differential to the euro area. A real appreciation of the franc took place because the peg can only do that much, i.e. stabilize the nominal exchange rate. The same FX purchases that supported the peg inflated the domestic price level to the disadvantage of exporters. Therefore, if banks had not "voluntarily" placed a large part of the newly printed francs in deposits with the SNB the price competitiveness of exports would have been similarly hurt as during a free-floating franc. It is worth noting that, outside of the peg, a significant decline in import prices limited the increase in domestic prices benefiting exports (left chart below).

Instead of welcoming the decline in import prices, the SNB feared they may cause a mild deflation. They chose to import some of the euro area inflation and, by doing so, took a huge gamble on financial stability. Monetary aggregates increased exponentially, as the monetary base (M0) increased 12 times to CHF 550 bn and the broad money supply (M3) soared by about 60% during the decade ending in September 2017. Fortunately an exponential increase in domestic lending via the credit multiplication mechanism didn't take place, but the mortgage credit increased by about 5% annually. It inflated real estate prices by about 50% for apartments and 40% for single-family houses over the same period.

Despite SNB's concerns and the persistent appreciation of the real exchange rate, Swiss exports held out extremely well (right chart above). From 2007 to 2016 they grew by almost 50% in volume terms and more than doubled in euros while exceeding by a large margin the performance of the euro area exports. The reason for the surprisingly good evolution of exports lies in the free-market policies and competitive business environment that fostered the emergence of highly innovative businesses. Several Swiss multinationals are world leaders in cutting-edge industrial niches, such as pharmaceuticals, chemicals, engineering, scientific and precision technologies. The rather inelastic demand for their products makes them price setters on international markets. This explains why Swiss companies enjoyed growing sales and comfortable profit margins. While the rising purchasing power of the franc boosted their revenues in euros, the SNB's pegging policy appears to have hurt exports. The latter clearly underperformed during the peg and grew in volume terms by only about 3% y-o-y vs. an overall growth rate of around 4.5% during the entire decade. In addition, the exports' increase in euros has been only minor during the peg.

As a matter of fact, the Swiss manufacturing sector weathered well the challenges of globalization over the last two decades. By reorienting itself towards 8higher-value activities it retained a relatively high share of value added in the economy (left chart below). Despite the general collapse of international trade in 2009, it recovered during 2010 and 2011. Yet, it may not be a coincidence that this share went down constantly during the peg (2012-2015) and stabilized only in 2016. Moreover, employment in manufacturing started to go down in the last quarter of 2011 and only steadied in 2016 (right chart below). The other major sector losing employment was tourism which suggests that during the peg the two main export-oriented sectors retrenched in favor of non-tradable domestic activities, such as real estate, health, education or public administration. This development replicates the well-known pattern of inflation-driven misallocation of resources described by the Austrian Theory of the Business Cycle. And one cannot stop thinking that after the un-pegging of the franc, the tradable sectors would have recovered better in the absence of hefty monetary interventions.

Mises thoroughly explained how small countries end up importing the inflationary policies of their main trading partners if they peg their currencies to avoid the consequences of competitive devaluations of the latter. The Swiss franc's case provides a good example about the shortcomings of pegging to a currency losing its purchasing power. It also illustrates well Mises' balance-of-payments theory according to which a currency arbitrage which is not supported by subsequent price developments cannot distort indefinitely the purchasing power parity prevailing on the market. In this case any displacements of exports and trade balances are only transitory. And this makes not only "superfluous," but also counterproductive, the authorities' interventions to regulate international financial flows in order to control the money supply in the economy.

The flight for quality into the Swiss franc was precisely determined by lower inflationary expectations vs. the euro area. If they had been proven accurate, the lower price level in Switzerland would have canceled out the adverse effect on exports of an appreciating franc. And indeed, the Swiss companies managed relatively well the transient distortions of the appreciation of the franc. But the introduction of the peg supported by massive FX purchases inflated both import prices and the domestic price level. This was detrimental to exports and manufacturing and drastically limited purchasing power gains for both businesses and consumers. It also diverted the factors of production towards non-tradable sectors, risking a domestic credit boom and a house price bubble.

If only the SNB were less swayed by deflation doom-mongering and more confident in market self-correction mechanisms, the freeing of the Swiss franc shouldn't be a bridge too far.