Back on May 26, 2017, shortly after Moody's downgrade of China, Beijing "moved the goalposts" in its bid to reduce yuan volatility, to punish currency manipulators (read Yuan shorts) and limit capital outflows (the currency had weakened for three straight years, triggering draconian capital controls and the surge of bitcoin) when the PBOC introduced  a new "counter-cyclical factor" to reduce exchange-rate volatility while undermining efforts to increase the role of market forces.

As we explained at the time, under the new reference rate formula unveiled by the PBOC, institutions that provide quotes for the fixing would add an "intangible" counter-cyclical factor to their existing models, which take into account the previous day’s official closing price at 4:30 p.m. local time and changes in baskets of currencies.  In an amusing aside, to justify the move, China stated that its "foreign-exchange market can be driven by irrational expectations, resulting in "unreal" supply and demand that increases the risk of overshooting... The counter-cyclical factor may ease "herd actions" and help guide investors to pay more attention to economic fundamentals, according to the statement."

Specifically, Bloomberg reports that the People’s Bank of China recently told some lenders that contribute to the rate - known as the fixing - to adjust their use of the “counter-cyclical factor” in such a way that it would have no impact on the mechanism, and adds that according to its sources, the change has already taken effect. At the same time, there was no adjustment to other parts of the mechanism, and the PBOC did not give a reason for the adjustment.

The trajectory of the Yuan, which has surged in recent months as the dollar has fallen, between the two FX fixing revisions is shown below. 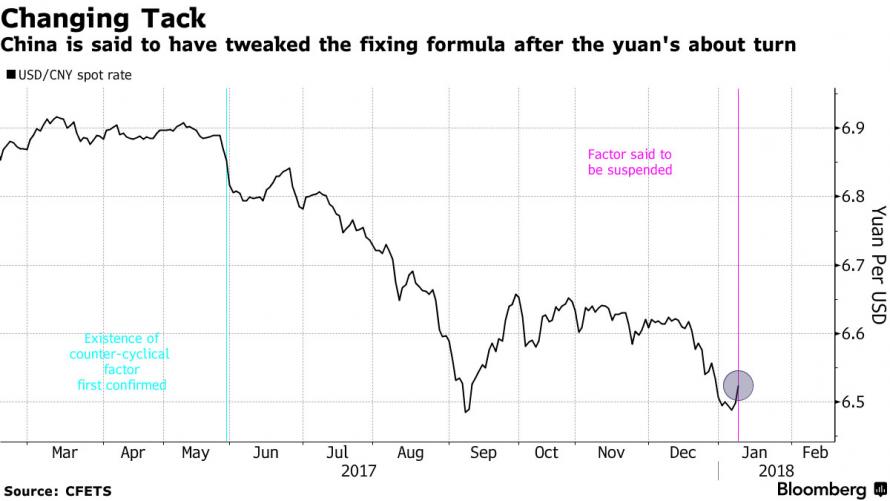 The yuan, which headed for its biggest drop in two months on the news, is allowed to move a maximum of 2 percent either side of the fixing. Analysts said the change shows China is confident in the yuan’s current trajectory, which has been one of steady appreciation.

According to analysts, the "intangible" countercyclical factor gave the PBOC more control over the currency, but vastly undermined earlier efforts to make the yuan "more accessible and market-driven." On ther other hand, greater control over the fixing - along with a steady economy and a retreat in the dollar - helped ignite a rally in the yuan in the second half.

Responding to the report, Raymond Yeung, chief China economist at Australia & New Zealand Banking Group told Bloomberg that "This is not surprising as the expectation for depreciation has waned," adding that "This suggests that the authorities expect to see the exchange rate to float within a reasonable range in the near term.”

Then again, the PBOC has a rather spotty record of picking inflection points, and as such today's removal of the FX fudge may also top-tick the Yuan's recent strength, resulting in another wave of capital outflows.

In an email to Bloomberg, the PBOC said that it’s up to the banks that contribute to the fixing to handle their own calculations. Lenders look to fundamentals when determining adjustments to the components that make up the factor, the central bank said. Full statement below:

In addition to the above, the factor - while it existed - counteracted "sentiment-driven volatility" in the market and the potential for “herd behavior,” China Foreign Exchange Trade System, which falls under the central bank, said on its website around the time it was introduced. It’s also typically been seen as a tool to address yuan depreciation without draining foreign-currency reserves. Goldman Sachs Group Inc. estimates that on most days since October, the fixing ended up stronger after the factor was incorporated.

Until today's shift, the yuan’s fixing was calculated based on the previous day’s closing price as of 4:30 p.m., its moves against a basket of currencies, and the counter-cyclical factor. The latter counteracted the impact of the previous day’s trading and any significant currency moves globally, people familiar with the matter told Bloomberg last May, thereby curbing excessive volatility.

What prompted the move?

The biggest factor by far was the yuan’s strength over the past year - or rather the dollar's weakness - which paved the way for the policy shift. With the dollar in a protracted decline, outflows from China have slowed resulting in the yuan’s turnaround. The Chinese currency strengthened for the first time in four years in 2017, and reached a four-month high on Monday.

The good news is that the easing in depreciation pressure has allowed China to take a step toward making yuan trading more market-based, at least until the Yuan tumbles far enough again for the PBOC to have to step in and restore its control over the currency.

“This is one direction to go -- and an easy way out -- if the authorities want to proceed with FX reform,” said Frances Cheung, head of Asia macro strategy at Westpac Banking Corp. in Singapore. “The recent yuan fixing pattern also suggests that the factor has not been utilized. That said, they reserve the flexibility to re-deploy the CCF if needed.”

Following the news, the onshore yuan fell 0.4% to 6.5258 per dollar as of 6:28 p.m. in Shanghai, set for its biggest one-day decline since Nov. 3. Offshore, the currency dropped 0.5%, the most since September. The change to the fixing is likely to boost volatility in the currency as it will allow for great flexibility, analysts at Nomura Holdings Inc. said. It will also lead to greater pressure on the Chinese currency, and will likely prompt a return to capital outflows, which in turn will provide the impetus for the next leg higher in capital control evading tactics such as bitcoin.

Finally, here is Goldman's take on today's announcement by the PBOC:

Given a lack of official information so far, it is uncertain if there has indeed been any substantive change in the authorities’ FX management. But if the report is correct, in our view, it could suggest that the authorities are ready to allow the CNY to be more market-determined. This comes against the backdrop that the authorities have recently further introduced measures to tighten outflow channels (e.g., on outbound M&As, ATM cash withdrawals overseas), which has probably reduced the authorities’ worry about potential adverse loop of a CNY depreciation prompting even more outflows.

The recent bout of CNY appreciation before today’s move—which had taken the currency’s strength against the CFETS basket close to the Sep ’17 peak—might also have been viewed as too rapid (and the heightened US-China trade barrier risk has also cast some uncertainty over the export outlook); and in any case, the positive CNY sentiment might have arguably presented an opportune window for the authorities to step up liberalization of the FX regime. That said, in our view, the authorities would probably step in to smooth the exchange rate should short-term market reaction prove excessive.

Overall, we remain of the view that the CNY is likely to depreciate moderately in 2018 (our end-2018 USD/CNY forecast at 6.80), reflecting i) structural under-diversification of Chinese residents, and ii) expected greater policymakers’ tolerance for a weaker CNY to help support exports and overall growth in 2018.