In the coming ten years eighty percent of the G20 countries will be facing an unprecedented population decline that will change the global economy profoundly. Economists and financial planners had better be aware of the coming demographic collapse in the so called developed world.

Successful economies are literally on a path to extinction while those doing terribly are growing like weeds. The UN population projections are far too optimistic and have little to do with reality. The extreme low fertility rates in industrialized nation contradict the UN rosy-coloured forecasts. The South Korean government’s prognosis shows that within seven years the country’s population will start to shrink and, if the trend holds, the nation will go extinct in the far future. South Korea’s demographic collapse coincides with that of China; Japan is already shrinking at an incredible paste. The world’s second, third and eleventh economies will see their working force and consuming base becoming smaller and smaller, and somehow renowned analysts see no problem. As a rule of thumb, the working-age population, the group that produces and consumes the most, started to shrink ten years earlier.

The world’s most homogeneous population and Asia’s 4th largest economy will soon start declining. South Korea is the lowest fertility level country (for 16 years in a row), as a result of which its society is ageing. In 2016 there was the lowest number of births ever and the lowest level of fertility rate (1,17) in 7 years. 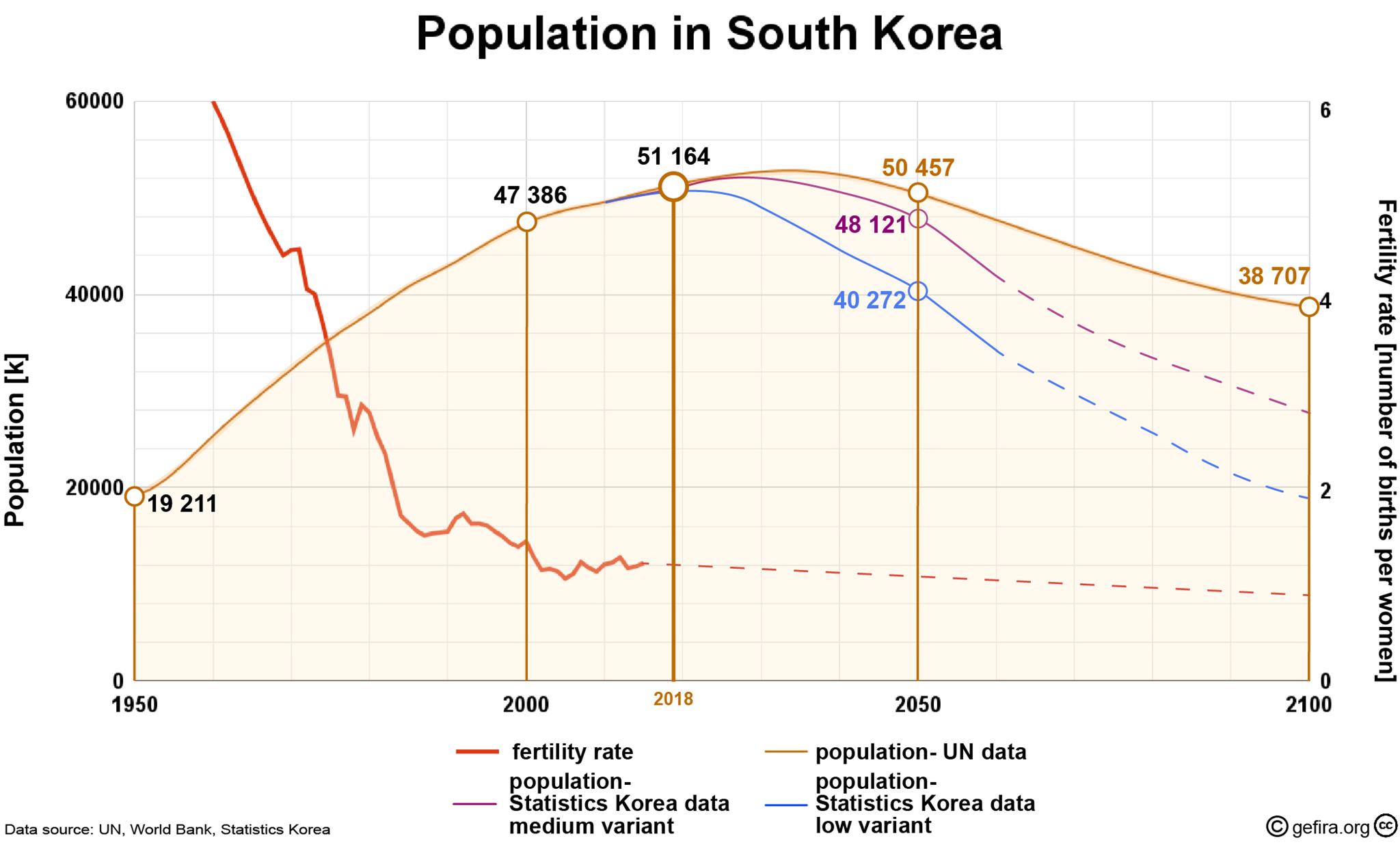 The number of people had grown rapidly since the republic’s establishment in 1948, but since 1966 it has started to decline because of the birth control programme.Also urbanization, accessibility of higher education, and a greater participation of women in the labour force have begun affecting the population size. Like in many cultures, in South Korean culture male descendants were very important for the continuity of the family, as they provided financial support and took care of their parents in old age, so people tried to have a son. If the first-born child was not a male, then they had as many children as was needed to eventually have a son. In 1973 a selective abortion law, limited to special cases, was passed, but it turned out to be abused in that predominantly female offspring were aborted.In general, the population number has increased in most provinces (exceptions are big cities like Seoul, Daejeon, Gwangju). Then the government stepped in by discouraging married couples from having more offspring with the slogan “have a single child and raise it well”.In 2016 total population in South Korea was over 51 mln including about 1 mln foreigns. Each demographic forecast predicts dramatic decline in the population. In 2050 probably will be 40-48 mln Koreans and in 2100 even only about 20 mln. 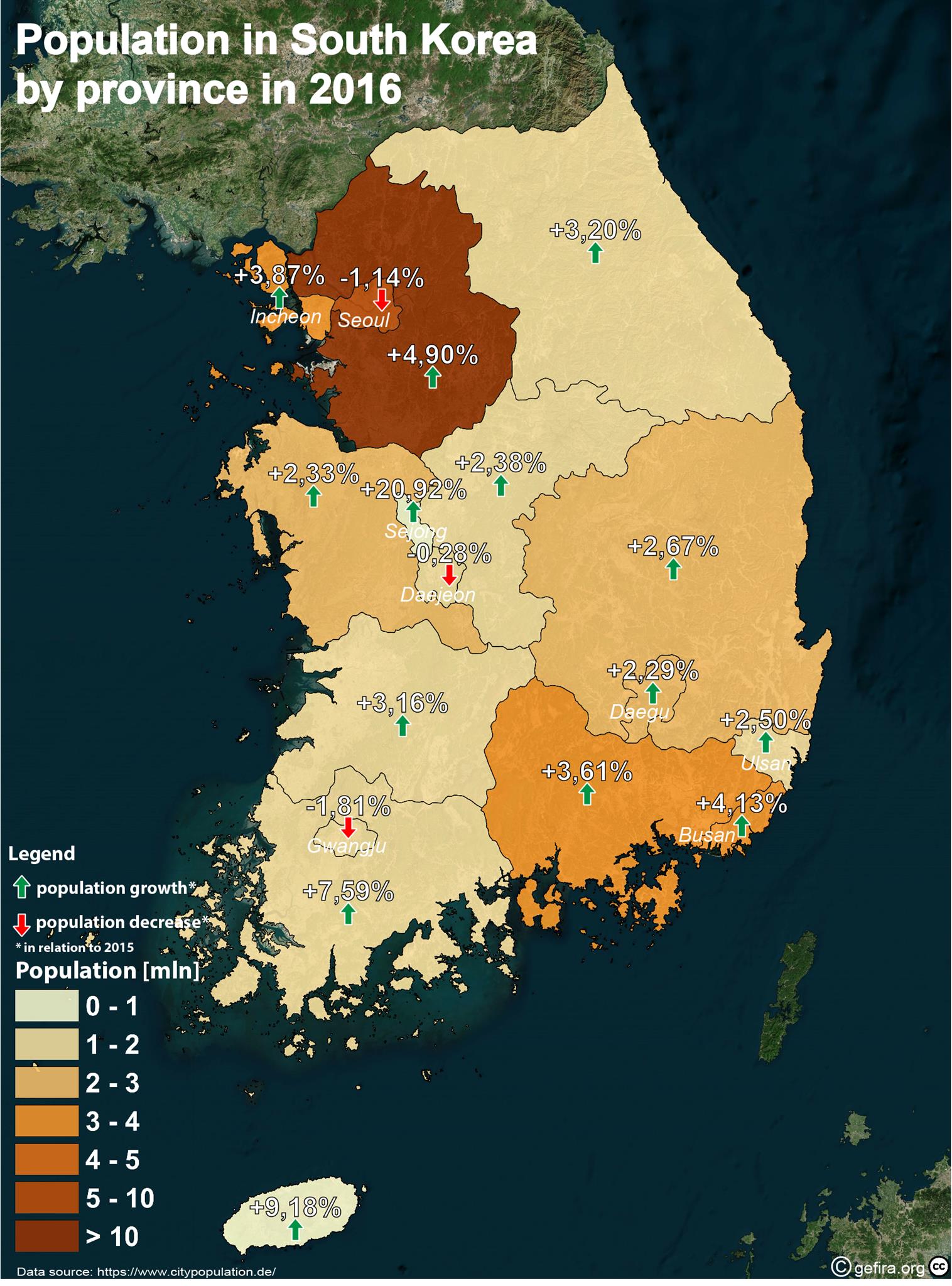 All these social phenomena and governmental measures have been contributing to the decrease in the nation’s birth rate and its resultant aging. Though Korea’s population growth is likely to continue for a few years yet, it will start declining rapidly, so that by 2750 South Koreans will have gone extinct. Already by 2045 Korea could be the world’s oldest country with an average age of 50. The population pyramid has begun to expand upwards which means that the number of elderly people is increasing and the number of the young and children is decreasing. The years 2016-2017 showed for the first time a decline in the working-age population aged 15-64, which means that Korea’s consumption base started shrinking. Just now people aged 65+ are 14,12% of the society and these aged 0-14 only 13,21%. Probably in less than 50 years seniors will make up over 40% of South Korea’s inhabitants. 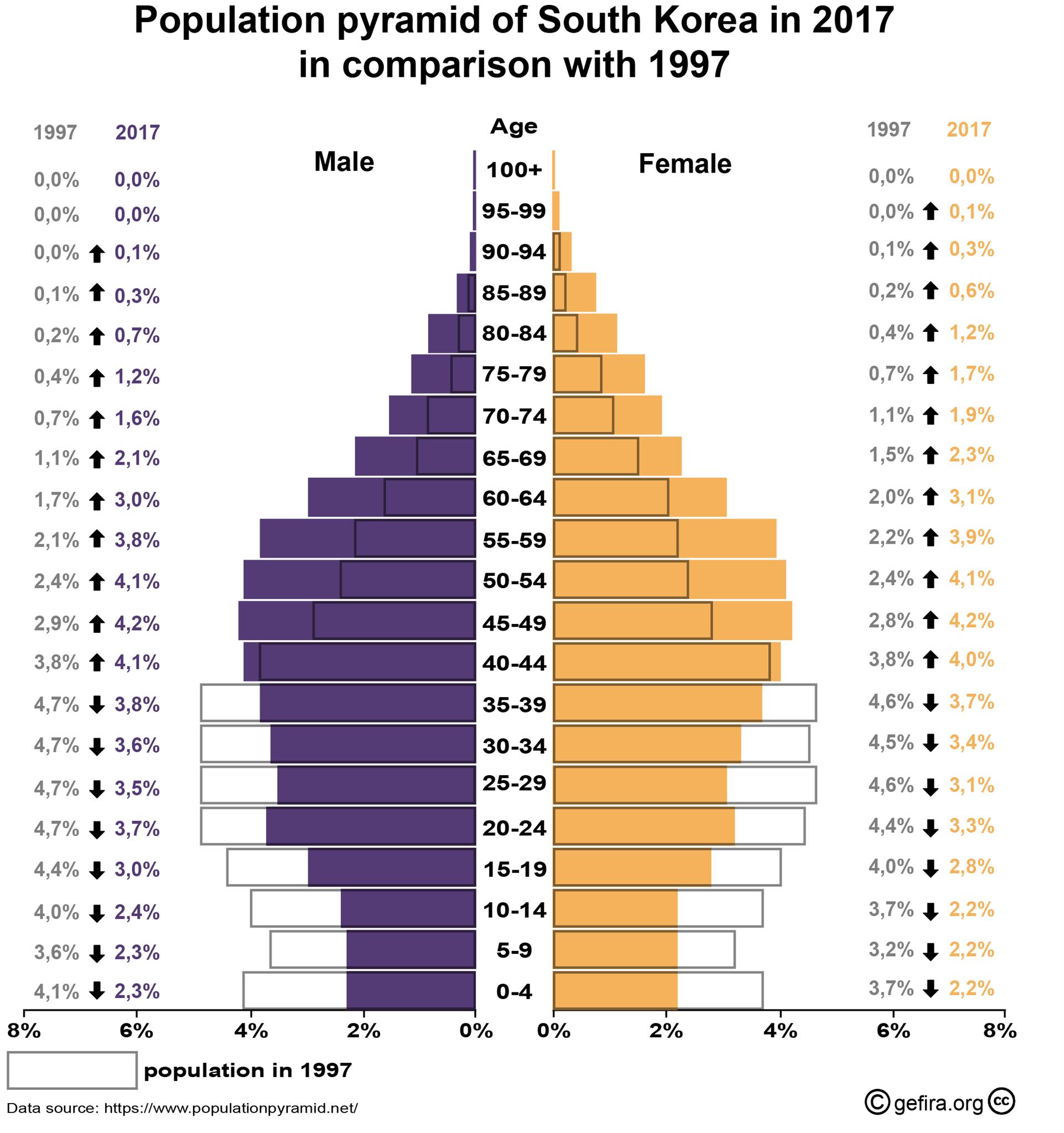 Some of the reasons for Korea’s low birth rate are similar to those in Japan in the early 90’s. Couples do not want to have a large family because of rising costs of living, including housing and education. South Koreans have the world’s longest working hours, so they do not have time for a family or private life. At the same time there is also a high unemployment rate among young people. Women do not want to have children early in their lives because of the career, unavailability of maternity-leave and little participation of men in child raising and housework.On average, women have their first child at the age of 31. Many Koreans think that marriage is just an option. Half of the singles are under 40 and they do not feel the need to start a family. This phenomenon could also be explained with a large share of atheists and believers of no formal religion. 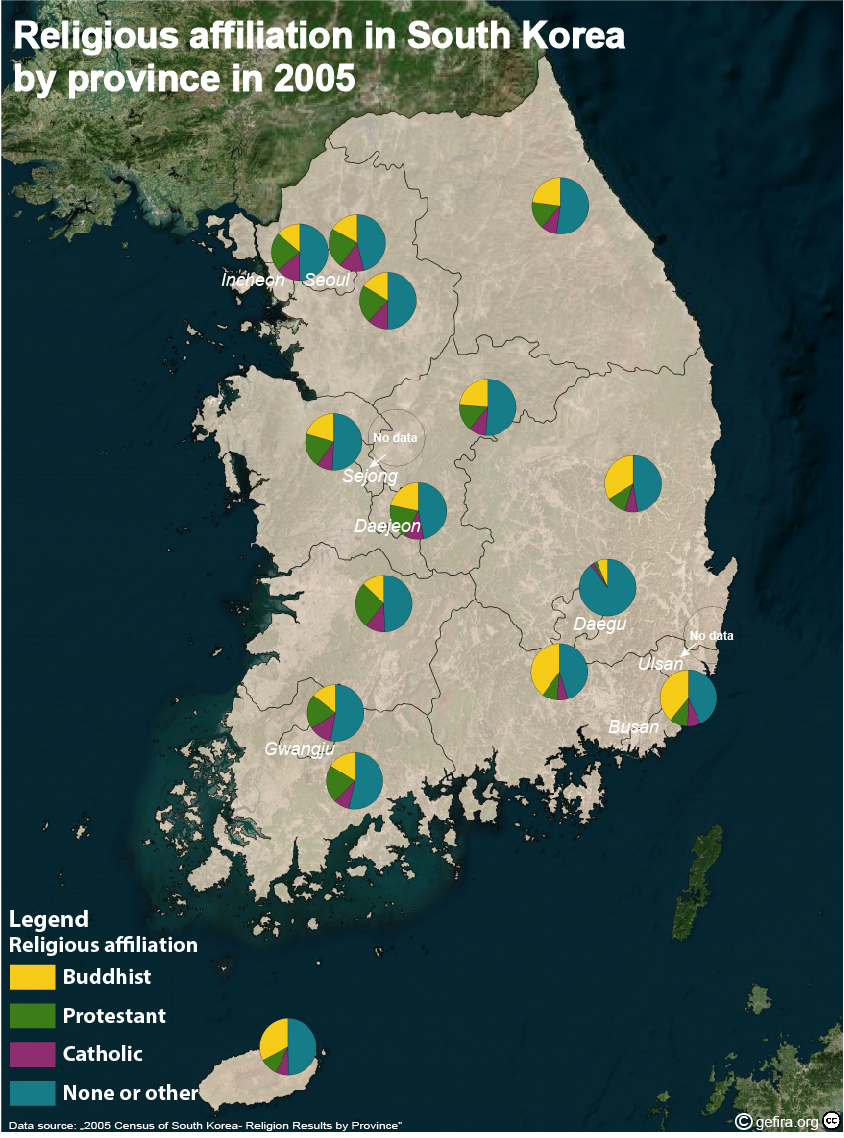 The low birth rate is not the only problem in South Korea: mortality is another one. South Korea is one of the countries with the highest suicide rate in the world. 40 Koreans commit suicide every day which is also the effect of decreasing numbers of believers. 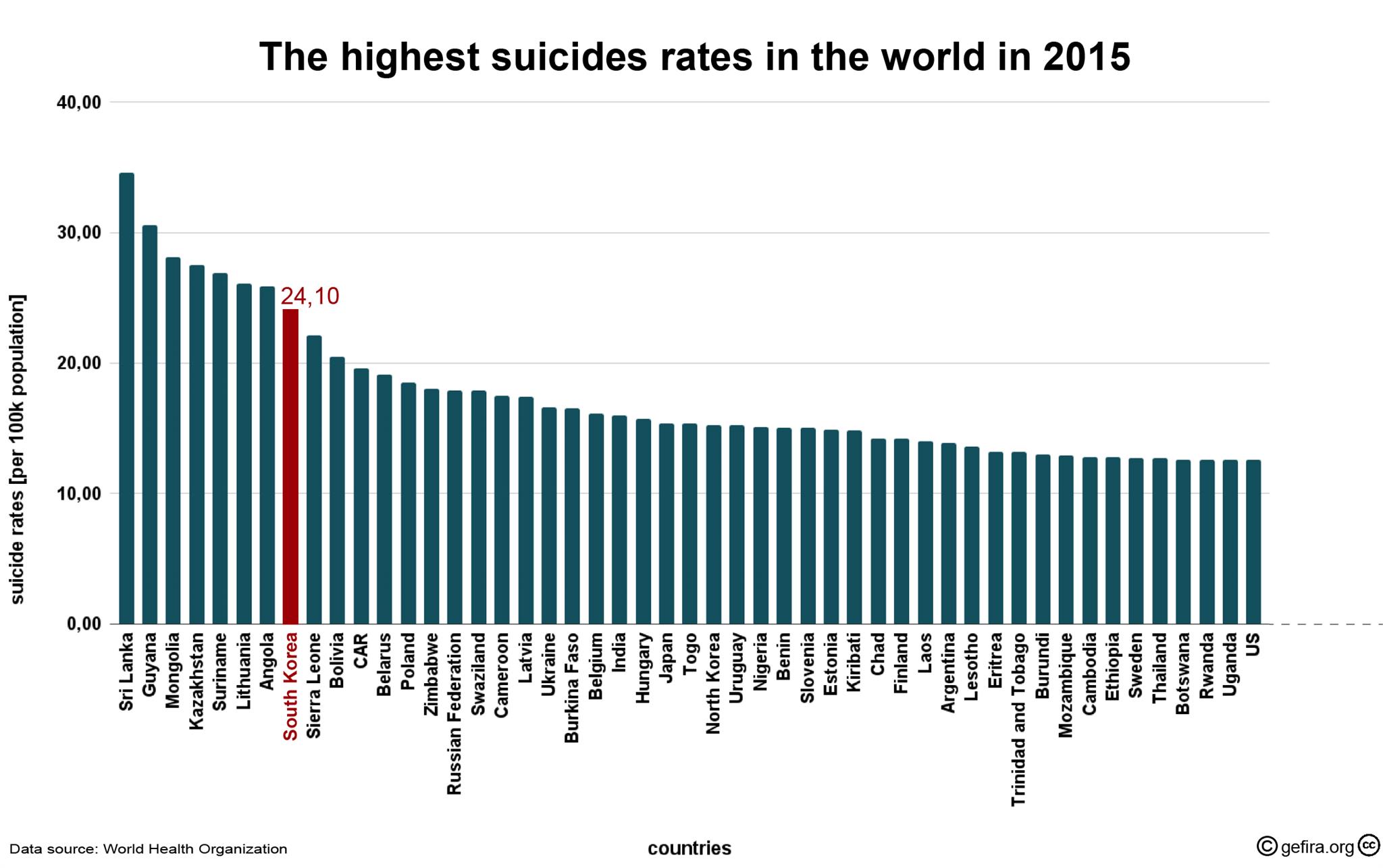 This issue very often concerns elderly people. Half of those aged 65+ live in relative poverty and ¼ of them live alone. They did not put aside capital for their retirement. They are unable to find work and the level of isolation and depression has increased in an aging society. Among young people the most frequent cause of suicide is intensified stress at the workplace and educational system. 40% of suicide cases are committed under the influence of alcohol and South Korea is the world’s largest consumer of hard liquor. The average is 14 shots a week (as compared to US 3). Koreans are ashamed of psychological problems and they hardly ever are willing to undergo relevant treatment. Alcohol abuse is more acceptable than psychiatric visits. Surely, it contributes to a large number of suicides. 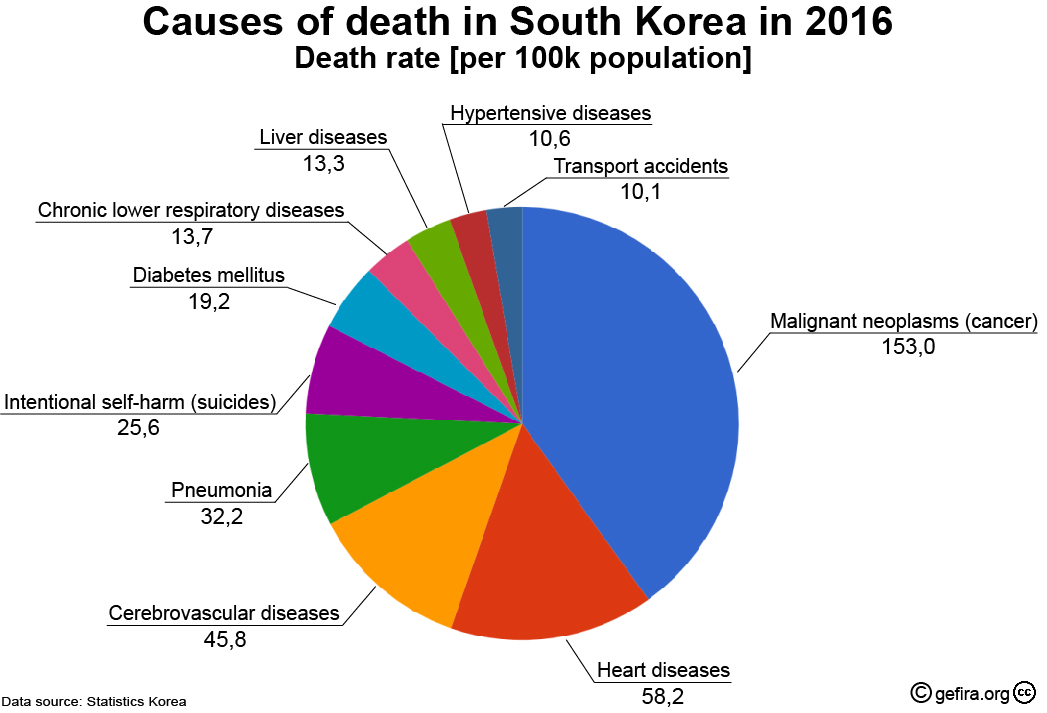 The demographic situation will adversely affect South Korea’s economic growth. Seoul, whose inhabitants make up 20% of the whole nation, will feel the shift in the population structure the most: its labour force will shrink. It is expected that Seoul’s population will have dropped at least by 1 million by 2040. Already in the whole country health care expenditure has increased (from 3,8% to 7,2% of GDP).

Business Insider, a New York based financial website, said that economists have suggested that the best approach in Japan and Korea could be to abandon gender roles and get more women into the labor force. Of course the Wall Street based economists know that this policy resulted in lower birthrates in Europe. Still, the New York based financial analysts are desperate looking for ways to boost the workforce in the world’s most productive countries.

Korean president Moon Jae-In also attaches importance to elderly people who are now a big part of the society and there is a need to create the living conditions suitable for such a large group. Since life expectancy has increased, it is worthwhile to create jobs for that age cohort especially when the labor force is shrinking. The president’s plan is to raise pensions, double the number of jobs for older workers with an increase in the monthly wage, finance Alzheimer and dementia treatment, and increase accessibility of social housing to elderly people.

South Korea’s government is also looking for help in having more robots in households.A good solution to South Korea’s demographic crisis would be a reunification with North Korea where the population situation appears to be more stable. The homogeneity of race would be maintained, while this seems unrealistic for now it can be an answer to the North-South crisis.

The situation of South Korea, the world’s 11th economy and 5th exporter, will affect many countries. It is a global producer of telephones, integrated circuits, cars, vehicle parts, ships, LCDs, and refined petroleum and it specializes in technology and design. In the context of trade, the circumstances in South Korea will have the biggest impact on China, US, Japan, Germany, Australia and Saudi Arabia.10)The demographic crisis will also impact the country’s security. It will change the geo-political balance as both Japan and South Korea are an extension of the US military power in East Asia.

The future of South Korea is very uncertain. There is a little time left to avoid the worst. Even so, some predict that a declining trend cannot be reversed.