Whether due to a massive flood of new supply or Trump's tax plan, which caps SALT, mortgage interest and property tax deductions, New York City landlords are suddenly in the unenviable position of having to slash rental rates to attract tenants.

According to the latest rental report from Douglas Elliman, median rents in the Big Apple dropped 2.7% YoY in December...

...continuing a downward trend in rental rates that started last summer and leaving rates at their lowest levels since 2014.

Of course, "attractive rents" are a relative term as the monthly dues for a tiny studio apartment in NYC will still run you $2,681, or $64.92 per square foot.  And while we're not great at the whole math thing, we're pretty sure that implies the average studio is roughly 495 square feet...or about the size of the average living room in all those "fly-over states" that elitist New Yorkers love to look down upon.

Not surprisingly, New Development rental rates seem to be leading the market down after posting a 5.9% sequential decline in December.

Meanwhile, Manhattan refugees seem to be flocking to Brooklyn...

...and Queens as rents in those areas are far more stable.

Of course, as we pointed out last week (see: NYC Apartment Sales Collapse 25% In Q4 As Trump Tax Plan Takes Its Toll) New Yorkers looking to sell their apartments are also taking a hit as prices (-9.4%) and volumes (-25.4%) in the 'for sale' market collapsed sequentially in Q4 as potential buyers took a pause amid the growing uncertainty.

Sales activity for the Manhattan housing market was at the lowest fourth quarter total in six years. The pace of the fall market noticeably cooled as market participants awaited the housing-related terms of the new federal tax bill. This translated into a decline in year over year closings for the final quarter of the year, although contract volume showed an uptick.

There were 2,514 sales to close in the final quarter of the year, down 12.3% from the prior-year quarter. The decline in sales allowed listing inventory to rise after declining year over year for the past few quarters. There were 5,451 listings at the end of the quarter, up 1.1% from the same period a year ago. As a result, the absorption rate, the number of months to sell all inventory at the current rate of sales slowed, rising to 6.5 months from 5.6 months in the year-ago quarter.

Listing discount, the percentage difference between the list price at the date of sale and the sales price, was 5.4% up nominally from 5.3% in the prior year quarter as sellers continued to travel farther to meet the buyer on price. Buyers continued to hold firm, forcing sellers to meet them on price.

Days on market, the average number of days to sell all apartments that closed during the quarter rose 3.2% to 97 days from 94 days in than the same period last year.

New development active listings and resale listings were up 0.7% and 1.2% respectively over the same period. With the nominal rise in supply, there was also a nominal decline in bidding wars, still accounting for 11.7% of all sales in the quarter, down 0.9% from the same period last year.

Per the chart below, 4Q closings in Manhattan fell to the lowest level recorded since early 2012/2013. 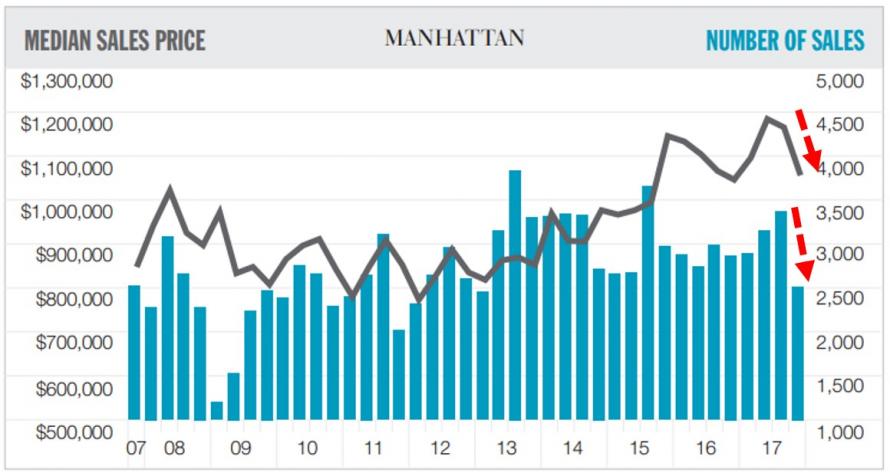 Meanwhile, re-sale volumes were down a staggering 26.9% as well.

So what say you...temporary blip or are falling real estate prices about to take a bite out of the Big Apple?