It’s never good news when an autonomous automobile is involved in an accident. Lately, Alphabet’s Waymo crashed an autonomous bus in Las Vegas, and Uber managed to flip a self-driving Volvo in Arizona.

In the latest installment of autonomous car accidents across America, a self-driving test car from the Ford-backed startup Argo-AI was severely damaged Wednesday that sent two people to the hospital. 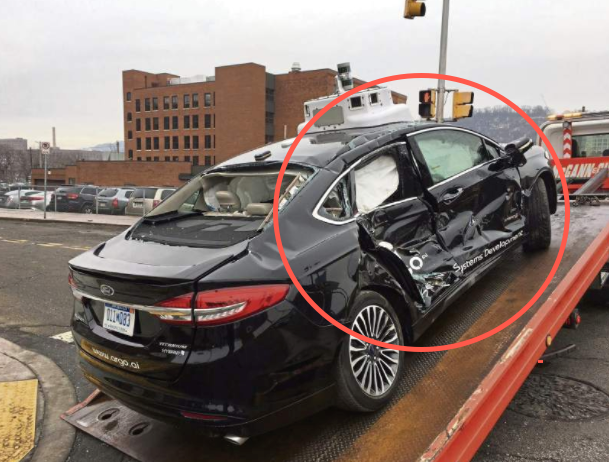 According to the Pittsburgh Post-Gazette, a box truck ran a red light about 10 a.m. at the 16th and Progress streets in Pittsburgh’s North Side and smashed into an Argo AI self-driving car with four people inside. Two of the four passengers in the Argo AI car were injured and taken to the hospital in stable conditions.

Alan Hall, a communications manager for Ford, who handles public relations on behalf of Argo AI, stated, “we’re aware that an Argo AI test vehicle was involved in an accident. We’re gathering all the information. Our initial focus is on making sure that everyone involved is safe.”

Hall offered limited information on whether the car was in self-driving mode during the accident, and or if the Argo AI fleet has been suspended.

In recent times, this is the second autonomous car crash in Pittsburgh. In September, Uber grounded its fleet of self-driving cars for a half day after one of its autonomous cars crashed. After an investigation, the company determined the car’s autonomous systems were not at fault during the accident.

In early 2017, Ford invested $1 billion in Argo AI, an artificial intelligence company that Ford has outsourced to build the brains in the company’s next generation of self-driving vehicles.  The startup anticipates the deployment of a fully driverless car, without a steering wheel or pedals, by 2021.

Back in November, we stated that just because its legal to test autonomous cars on public streets, doesn’t  necessarily mean they’ve been optimized for safety…

Waymo published a report for California’s Department of Motor Vehicles about how frequently its driverless cars “disengaged” because of a system failure or safety risk and forcing a human driver to take over. In the report, Waymo said this happened once every 5,000 miles the cars drove in 2016, compared with once every 1,250 miles in 2015. While that’s certainly an improvement, these types of incidents are hardly rare.