Japanese Purchases Of US Treasurys Tumble

In the last days of 2017, we showed something surprising: as a result of suddenly exploding USDJPY funding costs, there had never been a worse time for Japanese investors, traditionally some of the most ravenous purchasers of US paper, to buy US Treasurys.

In this particular case, widening of (1) as a result of Fed rate hikes and tightening of dollar funding conditions inside the US (2) and outside the US (3) have occurred simultaneously. This is shown in the chart below.

Whatever the cause behind these sharp funding shortages, one thing was clear - dollar funding costs (FX hedging costs) for both Japanese insurers, banks and other investors to buy US Treasuries were surging (with Japanese buyers and reached a post-financial-crisis high of 2.35% on 15 Dec. And in terms of practical implications for the treasury market this means that, all else equal, marginal demand for US paper is about to plunge for one simple reason: the FX-hedged yields on US Treasurys have plunged to (negative) levels never seen before (unless of course foreign investors buy US Treasurys unhedged).

And while TSY funding costs, and various X-CCY basis swaps in the past two weeks has dropped, Japan's lack of appetite for US Treasurys will only continue to rise.

The reason is that as the Nikkei reports, Japanese investors - traditionally the most enthusiastic foreign buyers of US Treasurys - have become far less enthusiastic about buying US debt last year on growing concern about rising U.S. Treasury yields. According to Ministry of Finance data released on Friday, Japanese investors' net purchases of mid- to long-term foreign bonds tumbled 94.6% on the year to 1.1 trillion yen ($9.9 billion) in 2017, the first annual decline in four years. 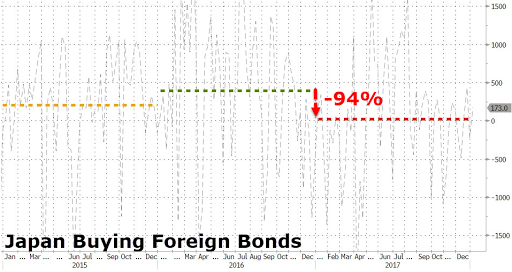 In prior years, Japanese institutional investors such as banks and life insurance companies had actively pursued foreign bonds in search of higher returns, finding few alternatives in Japan, where interest rates remained extremely low, and Europe providing few options as a result of the ECB's NIRP policies. As a result, the only option for many was US paper.

But the November 2016 election of Donald Trump as U.S. president sent the 10-year Treasury yield shooting up from around 1.8% to almost 2.6% in just over a month, and the yield stayed above 2% throughout 2017. Any investors holding onto Treasurys during the yield surge would have incurred significant losses as prices tumbled.

And, of course, as discussed at the top, the higher cost of buying the U.S. dollar is also at play. Life insurers often hedge against a strengthening yen via foreign exchange swaps when investing in foreign bonds. But hedges have become more expensive due to higher U.S. interest rates and other reasons. So the appeal of investing in U.S. bonds has faded overall, unless of course, Japanese investors bid up US paper unhedge, which however could backfire dangerously should FX volatility pick up, or if the dollar continues to devalue against most G-10 peers.

The bottom line: foreign, and certainly Japanese demand for US Treasurys appears to be sliding, whether due to rising yields and P&L losses, or blowing out funding costs, at the worst possible time: just as net supply of US Treasurys is set to double from $488BN in 2017...

Which means that just one hiccup, and yields will soar. It also means that we are one not so major bond tantrum away from the Fed begging preparations for the next massive bond monetization episode, also known as QE4.