Tense last-minute rescue negotiations failed to yield a result over the weekend, and on Monday morning a major British construction company announced it was going into liquidation after it was unsuccessful in securing a financial lifeline. Carillion, which employs 43,000 people around the world, said in a statement Monday that rescue talks with stakeholders including the British government had collapsed, sending the company into compulsory liquidation.

Commenting on the collapse, Carillion Chairman Philip Green said in a statement that "This is a very sad day for Carillion…Over recent months huge efforts have been made to restructure Carillion to deliver its sustainable future."

In recent days however we have been unable to secure the funding to support our business plan and it is therefore with the deepest regret that we have arrived at this decision.

We understand that HM Government will be providing the necessary funding required by the Official Receiver to maintain the public services carried on by Carillion staff, subcontractors and suppliers.

Carillion, which has numerous public sector and employs 19,500 workers in Britain and 10,000 in Canada, has its roots in the construction business: roughly three-quarters of its sales come from the U.K., where it has hundreds of contracts with the government. It also builds infrastructure for high speed rail and power distribution projects, and provides government services such as road maintenance and hospital management.

The company had no choice but to liquidate after holding meetings with government figures over the weekend after its bankers refused to provide £300m in new funding without direct intervention from Whitehall. That said, the government will be providing funding required by the liquidator — known as the official receiver — to maintain the public services carried on by Carillion staff, subcontractors and suppliers. According to the FT, PwC is expected to be appointed by the courts to act on behalf of the official receiver and handle the liquidation of Carillion’s assets.

Carillion's global sales hit £5.2 billion ($7.2 billion) in 2016; the catalyst for its collapse is that Carillion was saddled with net debts of roughly £900m and a pension deficit of £587m, which hugely outweighed its stock market valuation last week of less than £100m after the company lost around 90% of its market cap during 2017.

The crisis was sparked last year when the Wolverhampton-based company warned it was losing cash on key contracts, debt was rising and that it would have to write off £800m and suspend its dividend, leading to the departure of former chief executive Richard Howson. 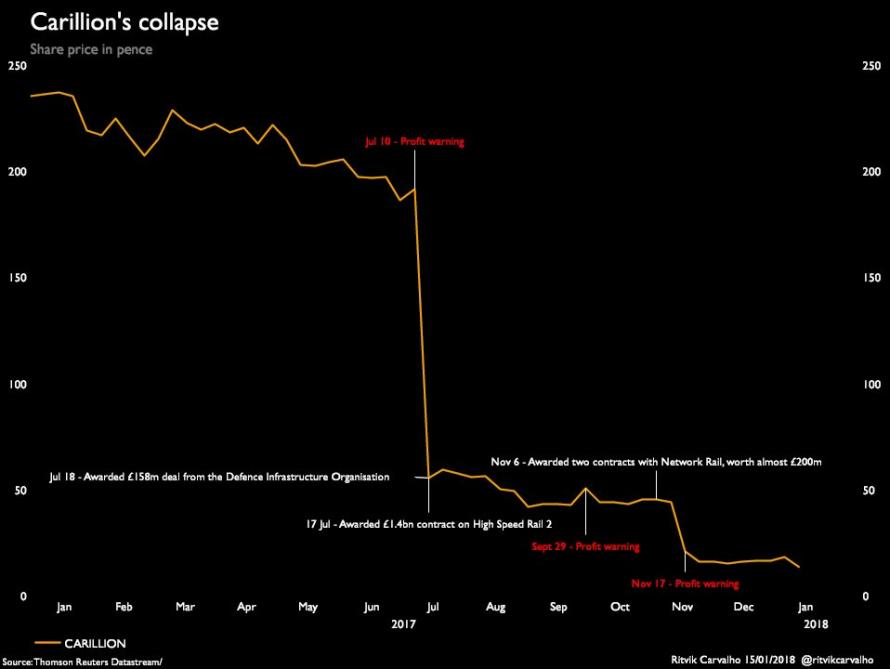 The collapse of Carillion was presaged last year, when the company alerted investors that it was short of cash and would sell assets to raise money.

David Lidington, the top minister at the U.K. government's Cabinet Office, said in a written statement that his priority was to keep essential public services running.

"All [Carillion] employees should keep coming to work, you will continue to get paid," he said. "Staff that are engaged on public sector contracts still have important work to do."

Lidington told the BBC on Monday that the government has been working on contingency plans since 2017 in preparation for a potential collapse. He added that new government contracts awarded to Carillion were structured as joint ventures to ensure that that other partners would be able to step in to complete the necessary work. But critics are unhappy that the government kept awarding contracts as the company floundered.

Angela Rayner, shadow education secretary, said the collapse was another example of the failure of privatisation of public services. “Carillion employees whose jobs and pensions are at stake should be the main concern, they are blameless in this corporate meltdown,” she said.

Speaking of pensions, around 28,000 members of Carillion’s 13 UK pension schemes will now be transferred to the Pension Protection Fund, the industry lifeboat for collapsed companies and the UK equivalent of the US PBGC  — one of the largest schemes the PPF has had to take over. Those who are not yet retired will receive 90 per cent of the pension they were expecting, up to a cap, while members who are already receiving their pensions will get the full amount, but may see lower annual increases in future.