Morgan Stanley: "We Have Entered The Late Cycle Euphoria Stage"

This morning, we published the latest commentary  by Chris Metli, the executive director of Morgan Stanley's institutional Quantitative and Derivative Strategies group, who made the case that while pitching hedges when the market is in the middle of a blow off top is a tough sell, that's exactly what traders should be doing, listing three key reasons: 1) positioning, 2) pricing, and 3) potential catalysts, which "all suggest now is an attractive time to buy Feb puts as a hedge – and it is a rare event when all align."

The main one, however, was that the current market move, one which earlier today saw the Dow Jones surge from 25,000 to 26,000 in just one week, is becoming increasingly irrational. A move, which according to the head of equity strategy at Morgan Stanley, Michael Wilson, is nothing short of late-cycle euphoria.

Wilson's argument boils down to the following: where there are fundamental underpinnings to the equity move, mostly as a result of Tax Reform, which has yet to be fully priced in according to the bank, equities have run well in front of fundamental values, even if the trendline for both is higher... for now.

He then concludes that "the bottom line is that we have entered the late cycle euphoria stage we predicted a year ago. Because the tax cuts occurred earlier and are larger than we expected, it is more likely the S&P 500 will reach our bull case of 3,000 before it's over." That said, Wilson just wants "to make sure investors appreciate this is higher, not lower risk than the rally we experienced last year—the opposite of what we are hearing from many clients and other commentators."

Belos some excerpts from his note:

Based on what our own equity analysts have done we think that tax reform has only recently started flowing through to consensus numbers. Exhibit 4 confirms this suspicion, showing the vertical jump in NTM EPS expectations that took place after December 15. Exhibit 5 shows the sectors and industry groups driving this jump in forward EPS, with Energy, Fins, Tech, and Industrials topping the list. 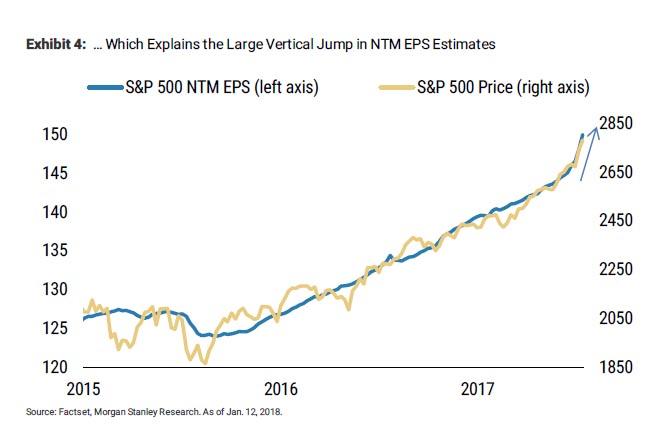 While the data are probably influenced by the reporting calendar (companies that report earlier in earnings season have analyst models updated sooner) we are still encouraged by the tilt the data shows toward our overweight sectors, many of which will see second order benefits beyond just the lower taxes paid.

Yet despite the clear benefit from lower tax rates to corporate earnings, it is not all good news, and as Wilson adds, while "earnings estimates can continue to rise as this effect plays out, [we] question the sustainability from the eventual peak as growth starts to top per our leading earnings indicator and some of the potential offsets to tax flow through begin to appear."

In other words, the good news is virtually fully priced in. And now it's time for the bad news. Why is MS skeptical? Mostly it has to do with how each company will handle the tax benefits:

Our strong belief is that the full flow through assumption will be violated however, meaning that  these numbers could be a best case scenario for tax flow through. Our doubt on full pass through of the benefits comes from an analysis of management incentives and early evidence  from companies that have already guided to less than full flow through of the benefits. As we go through earnings season how each company guides to the scope of tax benefits and how analysts choose to model this guidance should create a rise in earnings estimate dispersion.

Below Morgan Stanley lists some of the more important items to focus on that will likely prevent full pass through of tax benefits:

Which brings us back to the title.

What will the market pay for tax earnings? In keeping with our late cycle thesis and the idea that some of the tax effects may be competed away over time, we are skeptical that investors will reward this earnings growth with an expanding multiple. Ultimately multiples are heuristics to capitalize future earnings and cash flows. Questions on the sustainability of margins mean uncertainty around those flows, which should be reflected in a lower price for the earnings stream. Multiple expansion (normalization of the equity risk premium) was a big part of our out of consensus bullish view for 2017. In fact, the most recent multiple expansion (falling ERP) occurred in anticipation of rising EPS estimates we are now getting, much of which is due to lower taxes. To expect further multiple expansion once earnings estimates have been adjusted does not make sense to us. 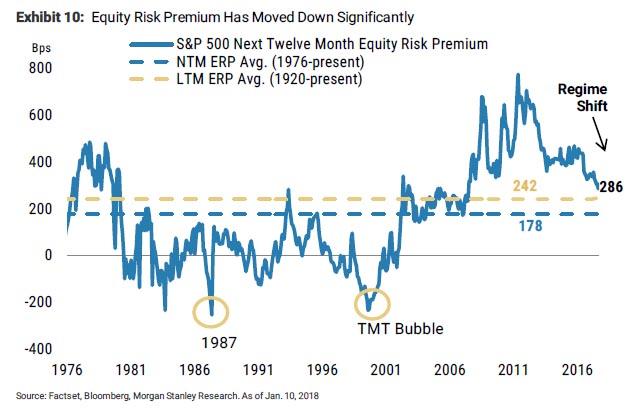 As a result, Morgan Stanley warns that "we do think multiples can overshoot as the Euphoria stage persists. We just want to make it clear this is the more speculative and low quality part of the rally which means any reversal will find less valuation support."

Finally for those who are convinced that the market can keep pricing in the benefits of tax reform every day for the next 3 years (just as it did with the tax reform passage in 2017), MS some unpleasant cold water:

The bottom line for us is that quality of earnings and earnings growth will likely fall as we begin to learn about all the effects of tax from management teams. This change in quality should be met with a cessation of fundamentally  driven multiple expansion (if not a lower multiple) and higher earnings estimate dispersion off a historically low base which introduces more volatility into the stocks. 4Q17 earnings season is just the start of these effects playing out.

In light of today's sharp intraday reversal - the biggest since December 1 - people may be finally starting to pay attention.