Trump Fires Trade War Shots: "If There Is A Trade War With China, There Is"

With Reuters having published the part of its exclusive Trump interview in which the president discusses North Korea and Russia, and in which he said that it is "very possible" the crisis with North Korea can't be resolved in a peaceful way, moments ago Reuters published highlights from the remainder of Trump's interview, which discloses more from Trump's trade agenda.

Here are the Reuters headlines:

Mexico’s peso pared some of today's gains on the news Trump "may" terminate Nafta agreement, with the MXN falling 0.5% to 18.6833/USD vs session high 18.58, although the bullet hardly says something we haven't known already.

And touching on China's threat to sell Treasurys if there is a trade war, Trump said:

Some more details from the full interview:

In an interview with Reuters, Trump and his economic adviser Gary Cohn said China had forced U.S. companies to transfer their intellectual property to China as a cost of doing business there. The United States has started a trade investigation into the issue, and Cohn said the United States Trade Representative would be making recommendations about it soon.

“We have a very big intellectual property potential fine going, which is going to come out soon,” Trump said in the interview.

While Trump did not specify what he meant by a “fine” against China, the 1974 trade law that authorized an investigation into China’s alleged theft of U.S. intellectual property allows him to impose retaliatory tariffs on Chinese goods or other trade sanctions until China changes its policies.

Trump said the damages could be high, without elaborating on how the numbers were reached or how the costs would be imposed.

U.S. businesses say they lose hundreds of billions of dollars in technology and millions of jobs to Chinese firms which have stolen ideas and software or forced them to turn over intellectual property as part of the price of doing business in China.

Asked about the potential for a trade war depending on potential U.S. action over steel, aluminum and solar panels, Trump said he hoped a trade war would not ensue.

Trump said he was not concerned such a move would hurt the U.S. economy. “We never talked about it. They have to do what they do,” he said.

For now it appears that the trade war drums are beating louder ahead of the State of the Union speech at the end of the month, when Trump is expected to unveil a hard line approach to trade with China, something we discussed in "US And China Brace For Trade War That Could Rattle Global Economy", especially with the Chinese trade surplus surging during Trump's first year in office. 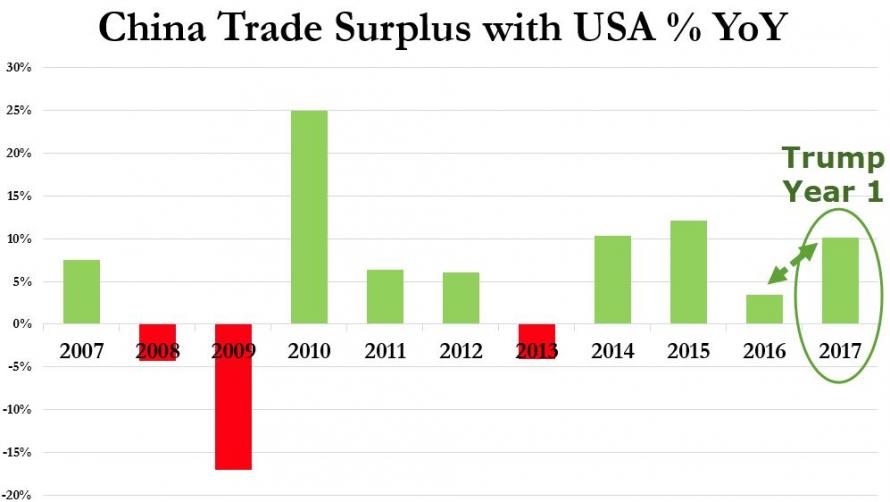