The One Reason Why the Crypto Crash Is Temporary

Cryptocurrency prices are tumbling once again overnight with Ripple getting smashed...

There are no clear catalysts but @IamJosephYoung notes that the South Korean government previously announced that under-aged investors and foreigners will be prohibited from trading cryptocurrency. Korbit is the first one to comply with that policy. Bithumb and Coinone yet to comment on it. Date expected to be February 1, not confirmed yet. Kookmin Bank and some other banks will not provide support for exchanges. But, Shinhan Bank will. Soon, they'll regret giving the entire market to their competitor.

And perhaps the pre-emptive impact of that speculative capital leaving the market is triggering these drops.

Additionally, headlines in the SCMP suggest further pressures from China...

The People’s Bank of China has ordered financial institutions to stop providing banking or funding to any activity related to cryptocurrencies, further tightening the noose since its shutdown of crypto exchanges last September sent digital currency enthusiasts fleeing overseas.

“Every bank and branch must carry out self-inspection and rectification, starting from today,” according to a document issued by the central bank on Wednesday. “Service for cryptocurrency trading is strictly prohibited. Effective measures should be adopted to prevent payment channels from being used for cryptocurrency settlement.”

The Chinese-language document, as seen by the South China Morning Post, was distributed as an internal document among banks, and not published on the central bank’s official website.

Decentralised systems like capital cannot be killed because “it will flow to where it is appreciated globally,” he said. “So you can choose to be part of that technological innovation or on the other side of the table.”

“Most of the trading is taking place via US dollar now, as some big accounts active in digital currency trading are already on China’s official watch list and payment channel already blocked,” said Zhao Dong, an individual bitcoin investor who spends most of his time in Japan now.

“This move by the PBOC is further pushing capital and innovation out of China.”

However, as Bonner & Partner's Bill Bonner notes, there's one simple reason why this latest crypto crash is temporary...

That’s the estimate for how many “ghost accounts” were created by banking giant Wells Fargo.

That’s about 1% of the total U.S. population. It’s also roughly the population of the state of Connecticut.

You’ve likely heard the story already, so I won’t go into all the details. But here’s the gist…

Wells Fargo created millions of fake accounts for its customers… to charge them fees for services that they never requested.

It was later discovered that Wells Fargo was signing customers up for unwanted insurance policies as well – again, to charge customers for services that they never requested. This was outright fraud.

It’s for reasons like this that a new type of technology has burst onto the scene. It enables secure, reliable, and transparent transactions… without the potential for manipulation by big financial institutions.

As an investor, this technology needs to be on your radar.

You Can’t Trust the “Trusted” Intermediaries

Recently, I wrote to you to give you an “inside look” at the world of cryptocurrencies. I told you that the crypto market would experience some pullbacks and high volatility. We’re seeing that today. Bitcoin, the world’s first cryptocurrency, dropped about 30% this week.

But despite these pullbacks, I’ve also told you that these new crypto assets still have a long way to run in the years ahead. And the reason why can be summed up in one word: blockchain.

You’ve likely heard the term “blockchain” associated with the popular cryptocurrency bitcoin. You may even know it as the decentralized ledger technology underpinning cryptocurrencies.

But that’s only part of the story…

Historically, companies, governments, and individuals all keep their records in one centralized database. Imagine a room with racks of computers that store information.

But centralized databases can be manipulated… Records can be changed, hard drives can fail, data can be lost, and the records represent only one party’s view of any given transaction.

In the world of blockchains and distributed ledger technology, the exact opposite is true. The transactions recorded on the ledger represent a transaction that takes place between the parties involved and is confirmed by the blockchain network via a consensus.

Once a transaction is written to the ledger, it is immutable. It cannot be changed.

The image below gives you an idea of the difference between these two network types. 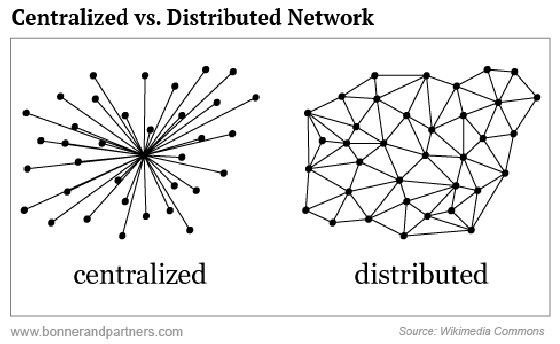 The value and utility that a well-designed blockchain provides is remarkable. Immutability, secure transactions, privacy, transparency, the reduction or elimination of fraud…

That last part is key.

That’s because in a centralized system, we depend on “trusted” intermediaries (banks and other financial institutions) to conduct transactions.

But as we’ve learned time and time again, these “trusted” intermediaries are not at all trustworthy.

It wasn’t long ago when the LIBOR scandal uncovered that many of the most “trusted” financial institutions in the world were manipulating interest rates for their own benefit, and of course at the expense of others.

Banks like Barclays, Deutsche Bank, JPMorgan Chase, UBS, Citigroup, Bank of America, and the Royal Bank of Scotland were found to be right in the middle of these manipulations. And we’ve already discussed Wells Fargo…

The corruption is seemingly endless.

By design, blockchain technology removes the potential for manipulation to take place.

You can think of this as a “new” internet. Today’s internet is how we send pictures, stream videos and music, and send emails.

But blockchain networks are different. They are all about transferring value.

The internet of value will allow you to send money, fulfill smart contracts, confirm your identity without sending sensitive information, and so much more.

The way that value is transferred is typically through a blockchain’s own cryptocurrency. Each blockchain usually has a controlled, finite supply of it by design.

For example, in the case of the bitcoin blockchain, bitcoin is its cryptocurrency… its means of transferring value and incentivizing network participants.

And the bitcoin supply is finite – only 21 million will ever be produced.

Think about that… a blockchain has its own monetary policy written into its software.

It’s Not Too Late

That’s why I’m so excited about this technology.

It has the potential to rewrite our entire society the way the internet did more than 20 years ago. And the assets associated with this technology – cryptocurrency and digital tokens – will continue to soar in value.

You may think that the cryptocurrency boom has already peaked. You may think you’re too late. But consider this…

I recently came back from a blockchain conference in New York. One of the most remarkable comments made was that the “big money” (hedge funds and large money managers) isn’t really in the cryptocurrency market yet.

The total cryptocurrency market sits at around $500 billion. But the institutional funds need the market to hit $1 trillion before they can start investing heavily. And when that happens… most likely sometime this year… the crypto market will really take off.

And the institutional money will first put their dollars to work in the cryptocurrencies that have the largest market capitalizations. That means investors should be looking closely at bitcoin, Ethereum, Ethereum Classic, and Bitcoin Cash, to start.

There will certainly be some pullbacks and high volatility along the way, like we’re seeing today. But I’m here to tell you… now’s the time to get in.