Update 2 and final: Shortly before 1pm ET, the Senate voted to advance a funding bill in an 81 to 18 vote, that will reopen the government, ending a three-day standoff that left federal agencies shuttered and hundreds of thousands of workers furloughed. Democrats agreed to advance a stopgap spending measure lasting until Feb. 8 after Senate Majority Leader Mitch McConnell promised to allow an immigration bill to reach the floor next month.

"After several discussions, offers and counteroffers, the Republican leader and I have come to an arrangement. We will vote today to reopen the government to continue negotiating a global agreement," Senate Minority Leader Charles Schumer (D-N.Y.) said ahead of the vote.

The three-week funding bill still needs to pass on a final up-or-down vote, but that is a formality now that the Senate has voted to end dilatory debate.

Schumer said McConnell has committed that if negotiators fail to reach an immigration deal before the stopgap spending measure expires on Feb. 8 “the Senate will immediately proceed to consideration of legislation” to protect Dreamers.

He said McConnell has promised that immigration debate “will be neutral and fair to all sides.” “Now there is a real pathway to get a bill on the floor and through the Senate. It is a good solution and I will vote for it,” Schumer added.

In other words, absent Trump caving on DACA - which is unlikely - the next government shutdown will take place just after midnight on Friday, February 9, which is that much closer to the debt ceiling X-Date...

Update: and there it is, the government shutdown is officially over after 2 and a half days.

Schumer: “In a few hours, the government will reopen. We have a lot to do…The Trump shutdown will soon end, but the work must go on. And it will” #tictocnews pic.twitter.com/46hoYYkWWP

And so, the government will now reopen for another two and a half weeks, when we go through the same farce on February 8.

The reaction is clear - stocks and the dollar up, bonds and bullion down...

The Dollar is spiking...

As The Hill adds, Senate Democrats said they are accepting a deal with Senate Majority Leader Mitch McConnell (R-Ky.) for an immigration vote, clearing the way for passage of a bill to reopen the federal government.

McConnell early Monday promised to take up an immigration bill that would protect an estimated 800,000 Dreamers from deportation, under an open amendment process, if Democrats would agree to end the government shutdown.

Senate Minority Leader Charles Schumer (D-N.Y) said that pledge was enough for his caucus to accept a three-week government funding bill, which is now set to pass at noon.

"After several discussions, offers and counteroffers, the Republican leader and I have come to an arrangement. We will vote today to reopen the government to continue negotiating a global agreement," Schumer said.

If lawmakers aren't able to get an immigration bill as part of that larger agreement by Feb. 8, the Senate would then take up a separate bill and "the process will be neutral and fair to all sides," Schumer added.

The agreement likely ends a three-day government shutdown that began at midnight Saturday after Democrats voted to block a month-long House-passed stopgap that extended funding for the Children’s Health Insurance Program but did nothing to protect illegal immigrants who came to the country at a young age facing deportation.

And while markets rose on the news of the government shutdown, they have spiked on the news that the shutdown is over. 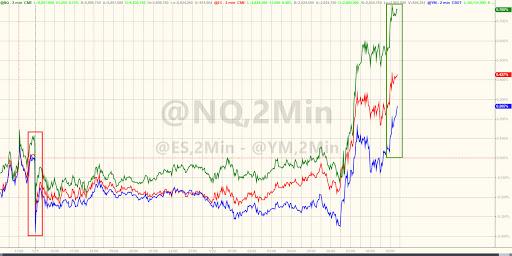 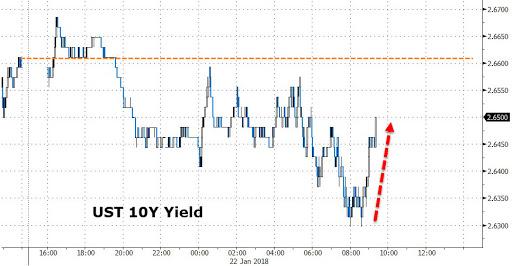 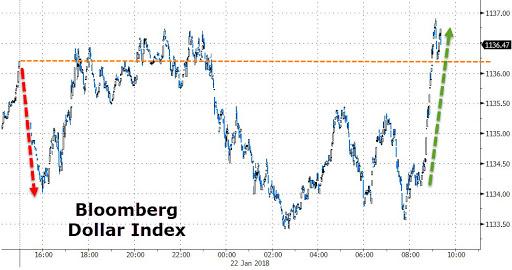 Risk assets have caught a bid following a report from Talking Point Memo, according to which some 10 minutes before the Senate vote is due to begin about extending short term funding, Senate Democrats are set to accepting a deal to end the government shutdown in exchange for the promise of a vote on the DREAM Act in the coming weeks.

Subsequent headlines from Reuters appears to validate that we may be on the verge of a deal:

As a reminder, DACA remains the most contentious issue preventing Democrats from voting to end the shutdown. According to TPM, three sources have said that the details of the deal aren’t yet clear but that a deal is "all but certain late Monday morning'.

“There’s a deal and the vote will likely have room to spare above 60,” one source told TPM.

CBS White House reporter Steve Portnoy adds that the votes to end the shutdown could be as many as 70.

Manchin, leaving Dem caucus, says the 3-wk CR may even get 70 votes.

Manchin, who is certain that a deal is done, tells reporters that there will be enough votes, while Sen. Bill Nelson said "you’ll see a resounding yes,” when the vote is called. Other Democratic lawmakers quoted by Bloomberg said they were making progress; Gary Peters says "feeling good" ahead of vote; Chris Coons says "encouraged" by statements Majority Leader Mitch McConnell has made and encouraged reporters to watch the upcoming vote

Looking at markets, there has been a modest knee jerk reaction higher in the dollar, with yields ticking up in response and USDJPY rising above 111.00 in what appears to be a relief rally.

Stocks are extending the dip-buying ramp...