Who's Lying: FBI Says 5 Months Of Texts "Lost," Yet IG Horowitz Says His Office Received Them In August

A major contradiction has been discovered between yesterday's revelation that the FBI "lost" five months of text messages, and a claim by the DOJ's Inspector General, Michael Horowitz - who claimed his office received the texts in question between FBI employees Peter Strzok and his mistress Lisa Page last August.

Knowledge of the missing texts was revealed in a Saturday letter from Ron Johnson (R-WI), Chairman of the Senate Homeland Security and Governmental Affairs Committee (HSGAC) - after the Committee received an additional 384 pages of text messages between Strzok and Page, several of which contained anti-Trump / pro-Clinton bias. The new DOJ submission included a cover letter from the Assistant AG for Legislative Affairs, Stephen Boyd, claiming that the FBI was unable to preserve text messages between the two agents for a five month period between December 14, 2016 and May 17, 2017 - due to "misconfiguration issues" with FBI-issued Samsung 5 devices used by Strzok and Page (despite over 10,000 texts which were recovered from their devices without incident).

However - as the Gateway Pundit's Josh Caplan points out, the lost text messages are in direct contradiction to a December 13, 2017 letter from the DOJ's internal watchdog - Inspector General Michael Horowitz, to Senate Judiciary Committee Chuck Grassley and HSGAC Chairman Ron Johnson, in which he claims he received the texts in question on August 10, 2017.

The OIG received these additional messages on August 10, 2017.

This glaring contradiction suggests someone is lying or perhaps simply incompetent.

Have had a couple of questions on this -- I'm told that DOJ's inspector general *does not* have the missing Strzok-Page text messages. https://t.co/NZvQ06Q2Ja @dailycaller

Did Horowitz's office *think* they had received the texts in question without actually verifying? Did the DOJ screw up and fail to read Horowitz's letter before "losing" the text messages so that "leaky" Congressional investigators wouldn't see them? Either way, this question needs answering.

While you can draw your own conclusions, keep in mind that Inspector Horowitz has been described as your archetypical Boy Scout bureaucrat - who as we reported two weeks ago - fought the Obama administation to restore powers taken away from the OIG by then-Attorney General, Eric Holder.

After a multi-year battle, Rep. Jason Chaffetz (R-UT) successfully introduced H.R.6450 - the Inspector General Empowerment Act of 2016 - signed by a defeated lame duck President Obama into law on December 16th, 2016, cementing an alliance between Horrowitz and both houses of Congress.

And Congress has been very engaged with Horowitz's investigation; spoon-feeding the OIG all the questions they need in order to nail the DOJ, FBI and the Obama Administration for what many believe to be egregious abuses of power.

19) 14 Questions for the IG!
This powerful letter is a thing of beauty that expands the scope and establishes the legal framework for a special counsel. Read in it's entirety to see where we are headed. (Steel Dossier, Uranium One, Clinton Foundation)
PDF> https://t.co/gscpkulJ5O pic.twitter.com/VjXjwGRkr8

As such, the OIG report is expected to be a bombshell, while also satisfying a legal requirement for the Department of Justice to impartially appoint a Special Counsel to launch an official criminal investigation into the matter.

As illustrated below, the report will go from the Office of the Inspector General to both investigative committees of Congress, along with Attorney General Jeff Sessions.

At this point, Horowitz's office needs to clarify whether or not they indeed took delivery of the "lost" text messages. If the OIG does indeed have them, it will be interesting to get to the bottom of exactly what the DOJ claims happened, and particularly juicy if they're caught in a lie.

When you read Ron Johnson's letter to Christopher Wray dial in on these 5 questions. #Strzok
PDF> https://t.co/isz1mWL08X pic.twitter.com/AKeSgveyxO

The letters in question can be seen below: 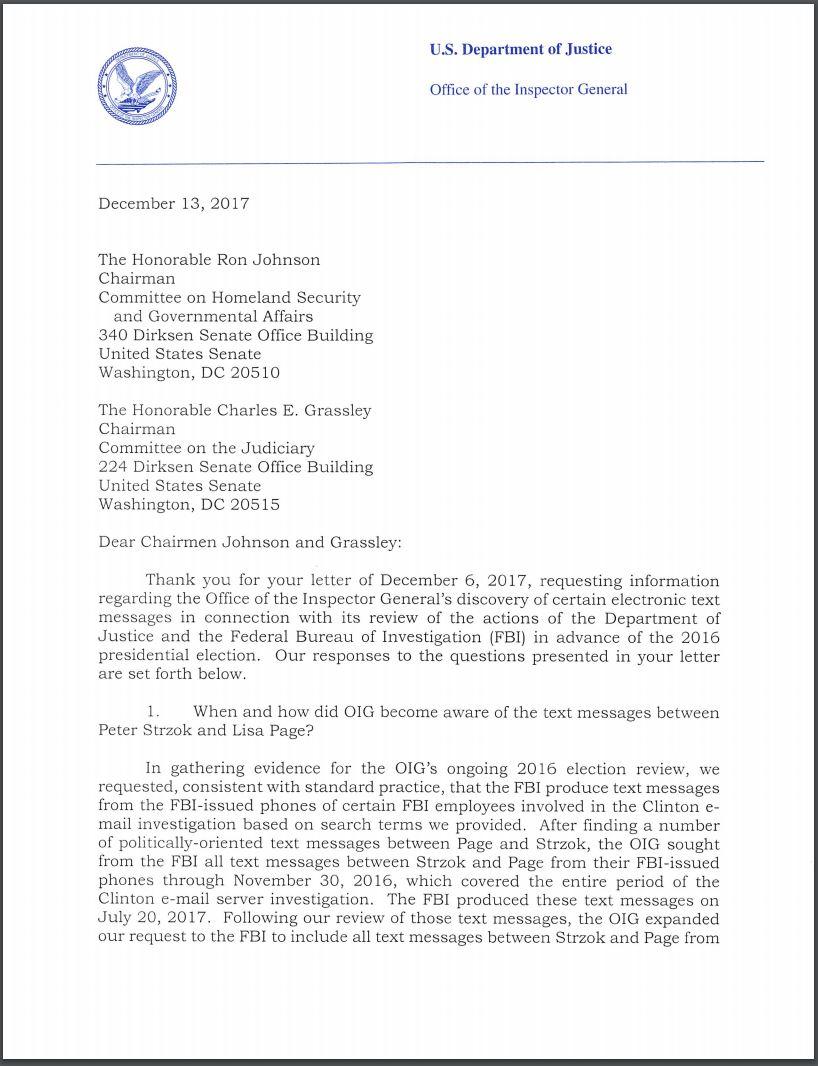 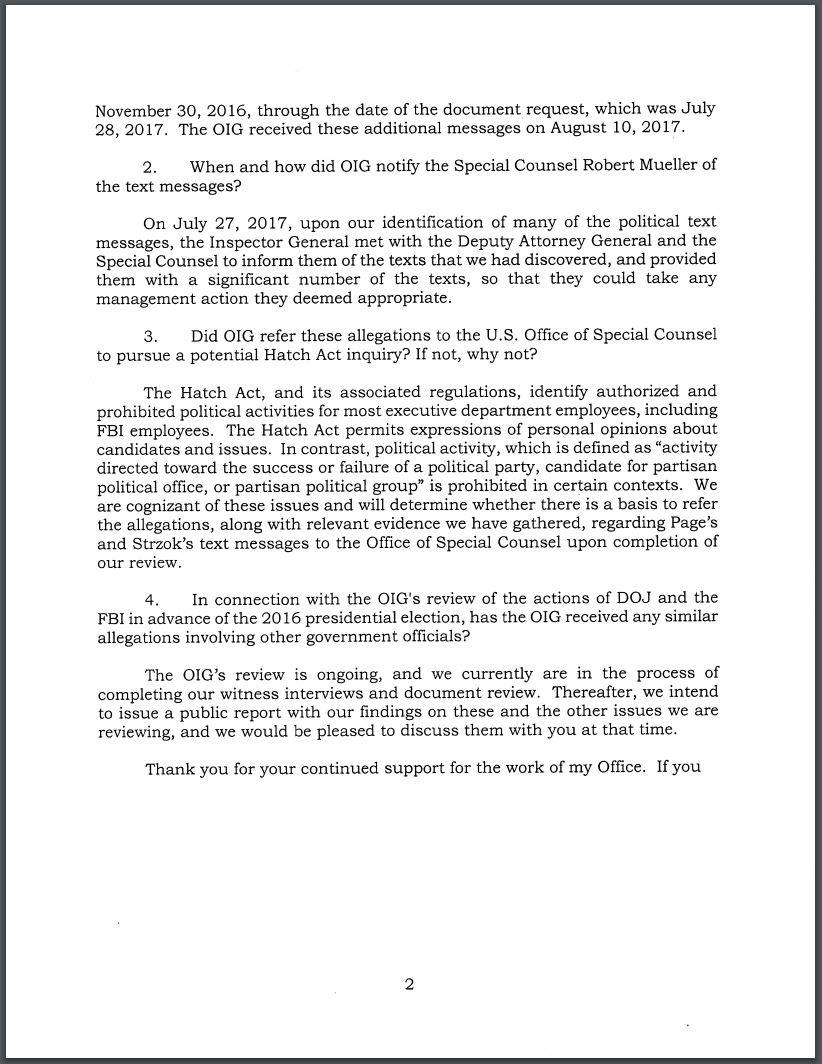 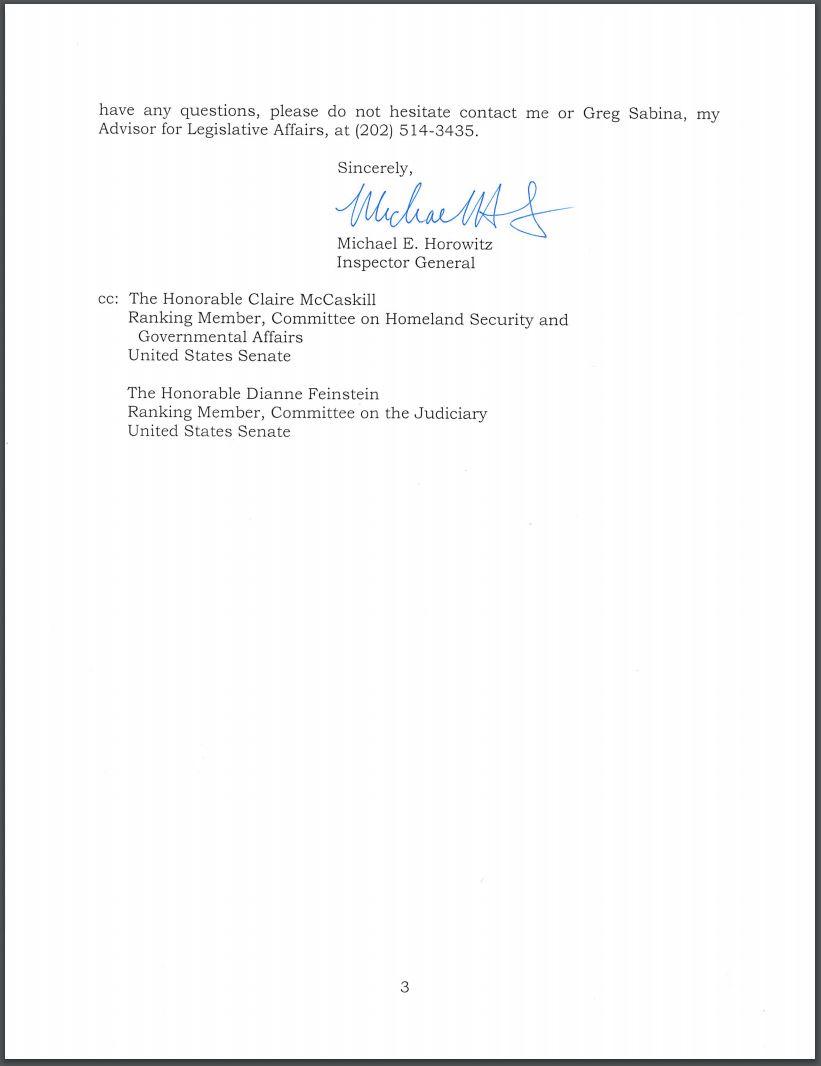