The war of words (China) and deeds (US) is hotting up once again tonight, sending the Dollar Index careening back to new cycle lows...

Following Wilbur Ross' "China's direct threat" comments today in Davos, China's MOFCOM has responded with the most aggressive rhetoric yet..

Which has sparked another leg down in the relentless dollar dump...

The collapse in the dollar has sent the Yuan back up near its pre-2015-devaluation levels...

The rapid appreciation against the dollar has fueled speculation policy makers will take additional steps to slow the the pace of gains, although its relatively slower ascent against a basket of peers may make the strength less of an issue than last time round.

"The rapid strengthening has triggered a panic in the market, aggravating the sentiment to sell the dollar," said Tommy Xie, an economist at Oversea-Chinese Banking Corp. in Singapore. "Apart from the weakening dollar, high onshore funding rates and strong demand for cross-border financing will both take foreign currencies back to China."

Perhaps more notable is the fact that the world’s most overheated market has at last succumbed to gravity. 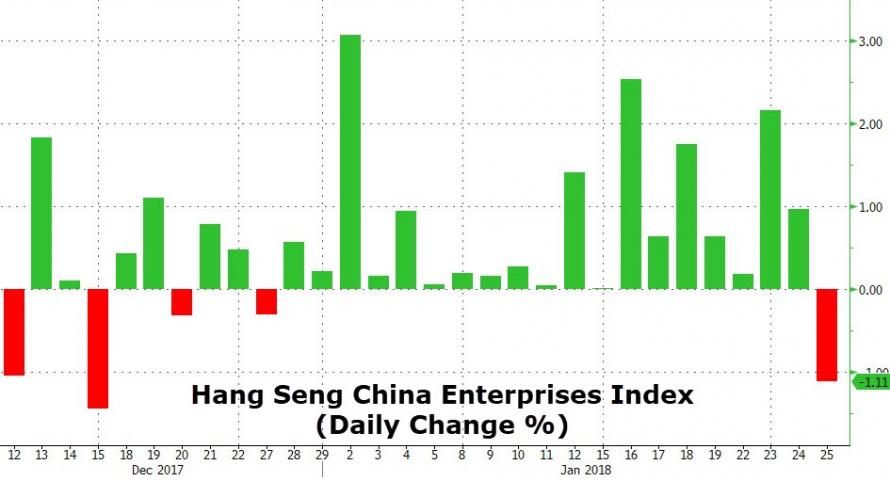 The Hang Seng China Enterprises Index slumped as much as 2.1 percent on Thursday, heading for its first down day since Dec. 27, with financial shares leading losses. The gauge, which tracks Chinese stocks listed in Hong Kong, is still up 14 percent for the year and beating virtually all other equity benchmarks in the world.