It's Official! The Risk Of Nuclear Annihilation Is At An All-Time High

On Thursday, the Bulletin of Atomic Scientists raised the likelihood of an apocalyptic nuclear catastrophe to its highest level in the clock's 70+-year history, the Washington Post reported. 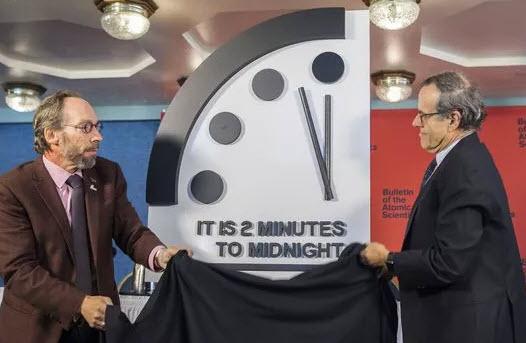 During a press conference announcing the escalation, the group of scientists comprising the Bulletin offered a "grim assessment" of the factors that preceded the increase: These factors included North Korea's nuclear program, tensions between India and Pakistan  and Russia's and China's incorporation of nuclear drills into its military exercise.

The group which includes 15 Nobel Laureates said the risk of nuclear annihilation in the present day has surpassed previous highs witnessed during World War II, and during the most intense periods of the Cold War.

The organization - which has 15 Nobel Laureates on its board - now believes “the world is not only more dangerous now than it was a year ago; it is as threatening as it has been since World War II,” Bulletin officials Lawrence M. Krauss and Robert Rosner wrote in an op-ed published Thursday by The Washington Post.

“In fact, the Doomsday Clock is as close to midnight today as it was in 1953, when Cold War fears perhaps reached their highest levels.”

The last time the clock advanced so far, the United States had just tested its first thermonuclear device, and the Soviet Union had tested a hydrogen bomb.

Today, Bronson said, “to call the world’s nuclear situation dire is to understate the danger and its immediacy.”

With President Trump's now infamous "Fire and Fury" remark reverberating in their ears, the committee said it also "considered at length" the unpredictability of US nuclear policy, which one member said "an unpredictability that is embodied in statements and tweets, by the US.

In an interesting twist, the Bulletin's decision to move the Doomsday Clock was also motivated in part by humanity's continuing negligence vis-a-vis climate change...

“There is little doubt that the risk that nuclear weapons may be used - intentionally or because of miscalculation - grew last year around the globe,” Rosner said.

The decision to move the clock forward was motivated largely by the Bulletin's sense of looming nuclear peril. But the danger is compounded by humanity's continued inaction on climate change, they said, as well as vaguer concerns about unchecked artificial intelligence, the spread of disinformation, and the public's eroding trust in institutions that could keep these threats at bay.

The clock, a metaphorical measure of humankind's proximity to global catastrophe, also advanced 30 seconds last year, to 2½ minutes to “midnight.” 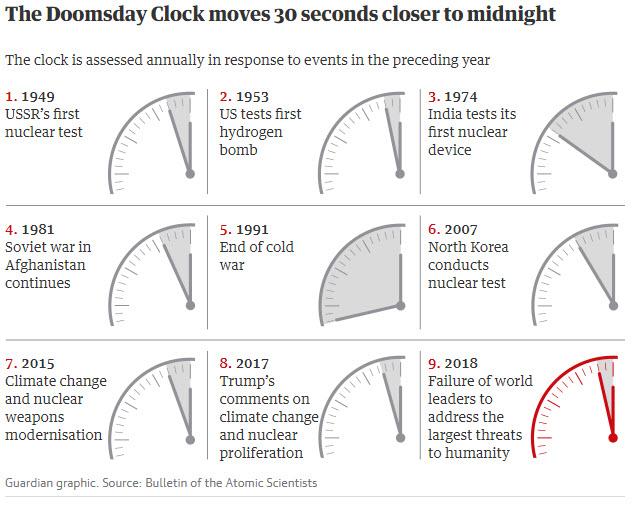 People in the US are increasingly on edge about the possibility of a nuclear strike - something that was elucidated earlier this month when an employee at Hawaii's Department of Emergency Management accidentally sent a ballistic missile alert to the phones of Hawaii residents, sparking a short-lived panic.

And in a tweet that went viral after the incident, this dad sat back and enjoyed the thinned-out lines at his breakfast buffett... 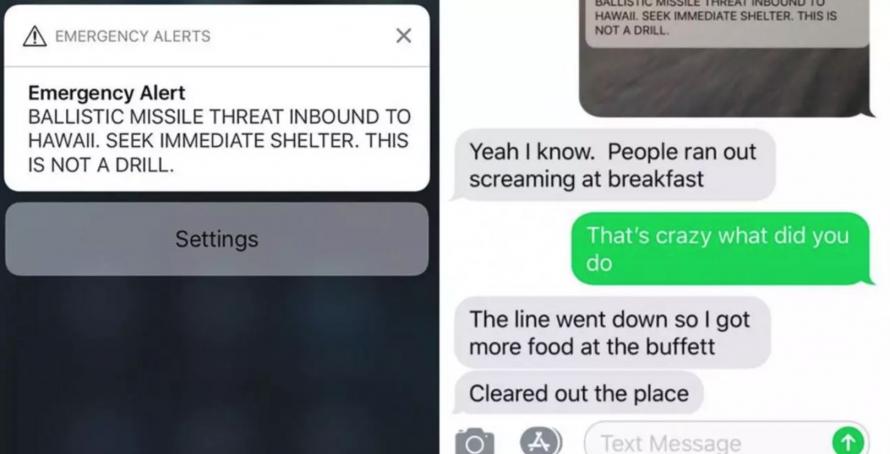