Rapper says he doesn't mind losing half his fanbase to Trump 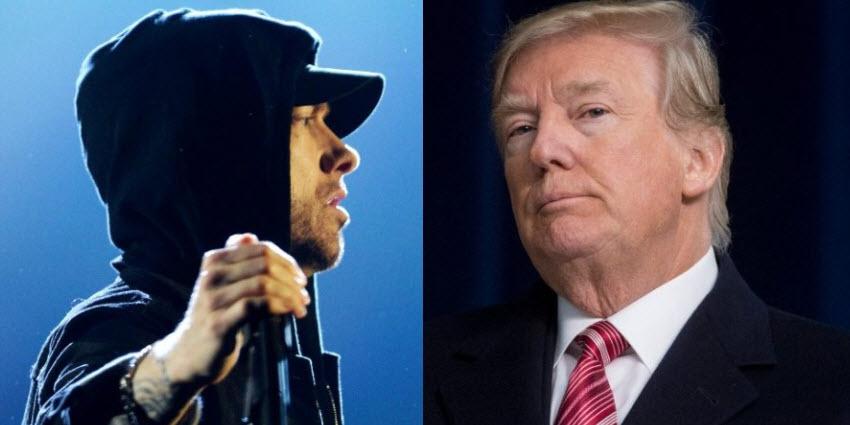 Eminem has hit out again at Donald Trump, arguing that both Hillary Clinton and “a fucking turd” would have made for a better President than the current US leader.

The Detroit rapper has been vocal in his criticism of Trump in recent months, saying that Trump doesn’t care about America and that he has “brainwashed” his supporters.

Now, speaking to Billboard, Eminem has claimed that he foresaw Trump’s election win.

“Watching the TV in fucking disbelief. I was in my basement, on the phone back and forth with friends like, ‘He’s going to fucking win’,” he said.

“I called it just from the rallies he was having when he first started running. Because just watching the impact he has, they were fanatics. There is something to be said about the person who really felt like he might do something for them – and he just fucking duped everybody.”

Last October, Eminem slammed Trump in a freestyle performed at the BET Hip-Hop Awards, drawing a “line in the sand” between him and Trump, telling his fans to pick a side.

He later expressed his surprise at Trump failing to respond to the freestyle.

“I felt that everybody who was with him at that point doesn’t like my music anyway,” Eminem said. “I get the comparison with the non-political-correctness, but other than that, we’re polar opposites. He made these people feel like he was really going to do something for them.”

“It’s just so fucking disgusting how divisive his language is, the rhetoric, the Charlottesville shit, just watching it going, ‘I can’t believe he’s saying this.’ When he was talking about John McCain, I thought he was done. You’re fucking with military veterans, you’re talking about a military war hero who was captured and tortured. It just didn’t matter. It doesn’t matter. And that’s some scary shit to me.”

“I knew [the BET freestyle] would get a reaction, obviously; that’s what I rap to do,” Eminem added. “But where I was coming from in that cypher was a genuine place in my heart. I [hesitate] to say [I have] hatred in my heart for him, but it’s serious contempt. I do not like the guy.”

“At the end of the day, if I did lose half my fan base, then so be it, because I feel like I stood up for what was right and I’m on the right side of this. I don’t see how somebody could be middle class, busting their ass every single day, paycheck to paycheck, who thinks that that fucking billionaire is gonna help you.”

Eminem recently hit back at critics who say that he’s “lost it”.

In his ‘Chloraseptic’ remix, Eminem rapped: “Not as raw as I was / ‘Walk on Water’ sucked? / Bitch, suck my dick.”

“Y’all saw the tracklist and had a fit / Before you heard it / So you formed your verdict While you sat with your arms crossed / Did your little reaction videos and talked over songs / Nah dog, y’all saying I lost it / Your fucking marbles are gone.”

So that should clear a few things up.