UK Defense Secretary: "Russia Is Ready To Kill Us By The Thousands"

Brits woke up to read the following brazenly fearmongering headline in their daily paper today: "'Russia is ready to kill us by the thousands': Defence Secretary warns that Moscow could cause mass casualties by crippling crucial energy supplies."

Recently installed in office, UK Defence Secretary Gavin Williamson is already beating the drums of a new Cold War while seeking to expand Britain's defense budget, claiming a new 'Russian invasion' of sorts is coming. In an interview with The Telegraph Williamson warned that Russia is actively seeking to bring about Britain's economic collapse by attacking its infrastructure which he said will cause “thousands and thousands and thousands of deaths”. Meanwhile, Russian officials were quick to mock the scenario as "worthy of a Monty Python sketch". 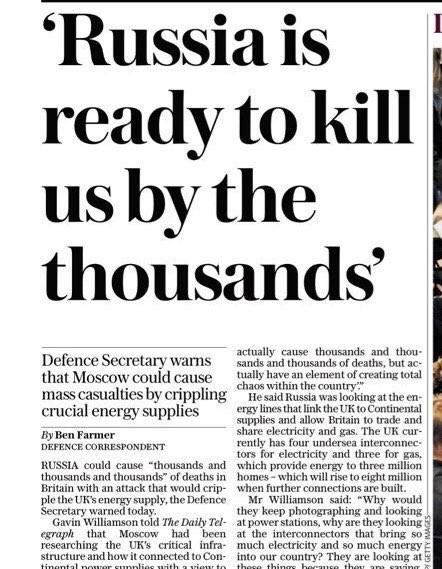 Tory Defence Secretary Williamson, considered by many to be a possible successor to Prime Minister Theresa May described the 'Russian threat' as more subtle than an outright conventional military invasion, saying "The plan for the Russians won’t be for landing craft to appear in the South Bay in Scarborough, and off Brighton Beach." Instead, he explained "the real threat" as term of a cyber and electronic warfare doomsday scenario of "creating total chaos within the country."

He told The Telegraph:

And Williamson's evidence for such sensational claims of an impending attack that would bring down nearly overnight civilizational collapse?

He offered the following: "Why would they keep photographing and looking at power stations, why are they looking at the interconnectors that bring so much electricity and so much energy into our country," and said further, "If you could imagine the domestic and industrial chaos that this would actually cause. What they would do is cause the chaos and then step back."

To underscore that in his mind, he's not envisioning this threat of a Russian-induced apocalypse far off in either the medium-term or distant future, nor advancing hyperbole or some imagined war game scenario, he added, "This is the real threat that I believe the country is facing at the moment."

"They are looking at these things because they are saying these are the ways that we can hurt Britain," Williamson said. Thought not stating who "they" are in terms of specific persons or organizations caught or observed in the act conducting such surveillance and war-planning as described (other than the ominously sinister 'Russians'), he went on to delineate some 'what if' scenarios: "If we lost our interconnectors, which would be something that we know that they are looking at, there would be 3 million homes without electricity. In a few years’ time there will be 8 million homes that would be dependent." 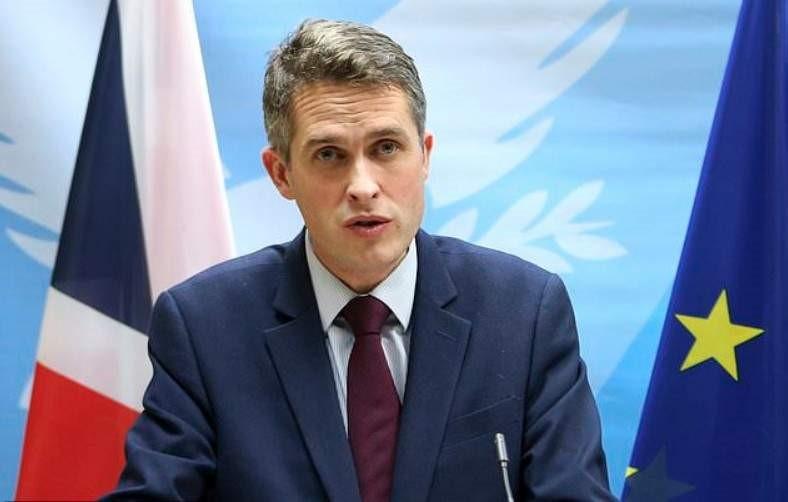 Shortly after the interview was published, UK energy and infrastructure experts addressed Williamson's statement about losing electric interconnectors, dismissing the scenario of chaos, mass death, and "millions" without power as absurd and clearly based in scaremongering. One leading energy expert, speaking to The Guardian, admitted candidly, "It does sound a bit like scaremongering really. If you take out one interconnector it’s clear the UK can survive. We saw that last year with the one to France."

Williamson's warning echoed a scenario laid out previously by Air Chief Marshal Sir Stuart Peach in December, who warned that Russia could in an instant end 97 percent of global communications capabilities and disrupt trillions in daily financial transactions, ushering in a "catastrophic" economic collapse, as he claimed Russia has long targeted the roughly 200 international undersea network cables while seeking disruption of Western societies and the global economy (which nonsensically would undermine Russia's economy as well).

Though a pattern of reckless Russia-baiting hysteria now seems to have become the default backdrop for any and all public discourse related to national security in the US and UK, it has remained a rarity for someone of Williamson's rank and office - occupying the highest civilian position over the armed forces - to appeal directly to the common citizenry and Western world in general essentially with words of, "Russia is ready to kill us!"

Well, let's just call it a slightly less sophisticated version of Condoleezza Rice's infamous Saddam scare tactic line, "we don’t want the smoking gun to be a mushroom cloud." Like with the deceptive and failed Iraq war, such statements - now recognized by much of the thinking public as worn-out jingoistic clichés - by design aim to immediately shut down critical thought or inquiry, whipping up a desperate survival mode mentality, as well as of course raising those defense budgets.

Indeed on Monday Defence Secretary Williamson sent the nation’s top general to push for expanded defense spending with Moscow as the primary justification for the change in a speech before the Royal United Services Institute (RUSI). As The Guardian reported early this week:

Military chiefs calling for more spending is almost as regular an event as the first cuckoo call. Usually, the calls are left to retired generals and admirals. It is safer for them to make the case; for serving officers it is harder, with the risk of clashing with political masters....

He [chief of general staff Sir Nick Carter] is making the plea now because the government is about to announce a new defence spending review and the next few months will be dominated by a push by Williamson and the MoD for a rise in the £36bn defence budget.

Moscow was swift to respond, albeit in an appropriately humorous way, with Russian Defense Ministry spokesman Igor Konashenkov saying Secretary Williamson had "lost his grasp on reason" and that the comments were "worthy of a Monty Python sketch". The Russian Embassy in London quickly tweeted in response, "Some British politicians bear no responsibility for their words," and later in the day issued a formal statement.

The formal statement, issued through the Russian Embassy in London's homepage and social media, slammed Williamson's comments as cheap manipulation of the British public using "confrontational rhetoric" for the sake of getting "a couple of billions of extra pounds from the budget." The statement reads in part:

We can see a wide rift between the opinions prevailing in the British society in favour of repairing our bilateral relations - and those among the military and political elite, who prefer to intimidate their own population just to get a couple of billions extra pounds from the budget.

In the modern world, you just can’t build a respectable policy on confrontational rhetoric. In the long run it will turn out badly for the prestige of the country itself, just like it was after UK actions in Iraq, Libya or Syria.

"Intimidation" is right, as the same build-up of baseless media and politicians' fearmongering and subsequent demand for conformity to the prevailing narrative of 'doomsday is approaching' was used in the lead-up to every direct as well as covert military interventions of recent history - all of which proved disastrous, leaving blood-soaked chaos in the wake.

This time, however, it doesn't appear the public is buying it as we're not seeing too many British citizens rushing for their nearest bunker or prepper store.