In this week's MacroVoices podcast, host Erik Townsend interviews Chris Cole of Artemis Capital Management, who famously earned a profile in the New York Times last year after publishing an influential paper about the looming surge in volatility that looks set to upend eight years of relatively sleepy prosperity in financial markets...

In his paper, Cole famously compared financial markets to the ouroboros - the Greek symbol depicting a snake eating itself, which Cole leverages as a metaphor for the contemporary state of financial markets... 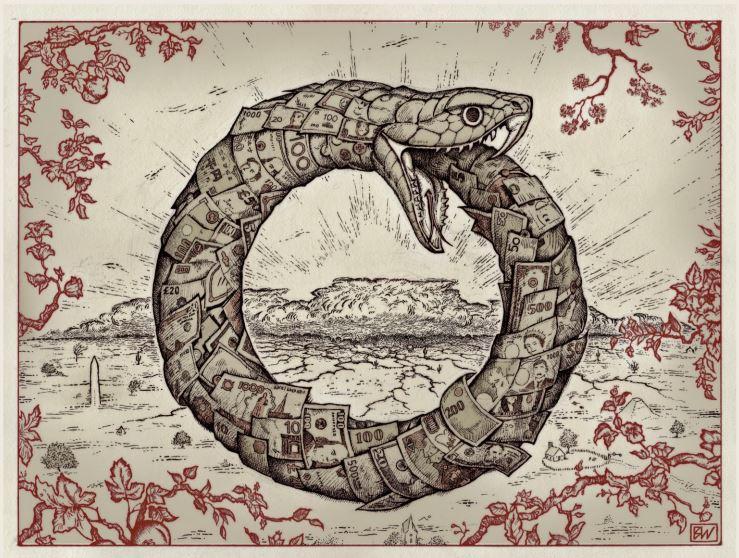 Volatility across asset classes is at multi-generational lows. But there is now a dangerous feedback loop that exists between ultra-low interest rates, data expansion, central bank stimulus, and asset volatility. And then financial engineering that’s allocating risk based on that Volatility.

This is leading into a self-reflexive loop where lower volatility feeds into lower vol. But, in the event that we have the wrong type of shock to the system, I believe this can reverse violently where higher volatility then reinforces higher vol.

This is a much bigger risk in today’s market environment, and it’s one that is not being correctly discounted.

As Cole told the New York Times back in September, he has calculated that, globally, there is some $2 trillion in short volatility trades.

As traders sell volatility, it creates a kind of short gamma effect, whereby other traders must sell even more to get the same bang for their buck.

A few weeks ago, Goldman derivatives strategist Rocky Fishman pointed out that net positioning of VIX ETPs had become short during the preceding weeks for only the second time in their eight year history, prompting Fishman to ask - rhetorically, of course - should we worry? 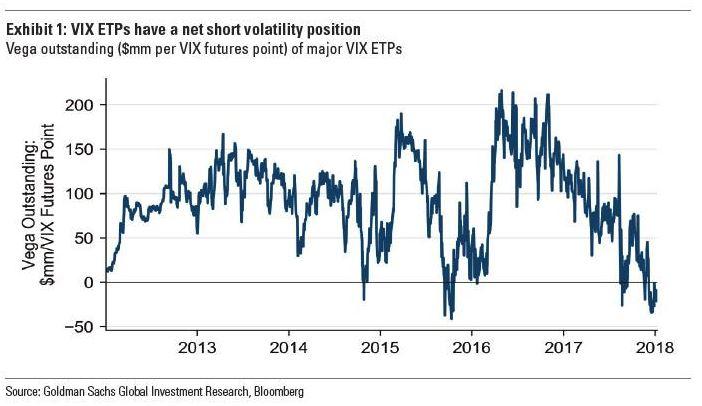 The obvious answer is "of course we should" as such lopsided positioning means even a three-point jump in the VIX could trigger a cascading short squeeze, as these funds are forced to cover by piling into long-vol trades, potentially crashing the market.

This is all great as long as volatility is low or dropping, as long as markets are stable. But, in the event that we have a reversal in this, there’s two trillion dollars of equity exposure that self-reflexive-driving lower vol can reverse in a quite violent way. And this is just equity vol, mind you:

Moving on to another topic that Coletouched on in a paper he published entitled "Reflexivity in the Shadows of Black Monday 1987"Townsend asks him about corporate buybacks, and their presences as a type of "long-vol" influence on the market. As it happens, these buybacks are just one piece of a large, global "short vol" trade.

Townsend asks Cole to elaborate, and Cole explains that explicitly betting on short volatility by buying an inverse-VIX ETF, or directly shorting the underlying options yourself, is only one small component of the $2 trillion figure mentioned above.

The short-vol trade – if you look at short volatility and you think about what volatility really is – it’s a bet on stability. And when you’re betting on stability, that’s a myriad of different bets.

And the other aspect of the short-volatility bet is that interest rates remain low or go lower.

What we’ve seen now with this short-vol trade, explicitly and implicitly, is that various financial engineering strategies out there that have become dominant in the marketplace – we’re talking about the largest hedge funds in the world employ these strategies – that are just replicating the exposures of a short-options portfolio.

But in the VIX space, that’s only about $5 billion worth of short exposure. You have about $8 billion of vol-selling funds, according to Bloomberg. And then about $45 billion (estimated) in pension over-writing strategies, these short-port or short-call strategies the pensions are doing.

So, in total, there’s about $60 billion of explicit short volatility. Which is big. But that’s not the most concerning aspect.

The bigger aspect is this $1.4 trillion in implicit short volatility strategies. These are replicating the exposures of a portfolio of short options, even though they may not be directly selling derivatives or directly selling optionality.

Among these implicit strategies are the $600 billion worth invested in risk-parity strategies. $400 billion in volatility-control funds. And about $250 billion of risk premium strategies... 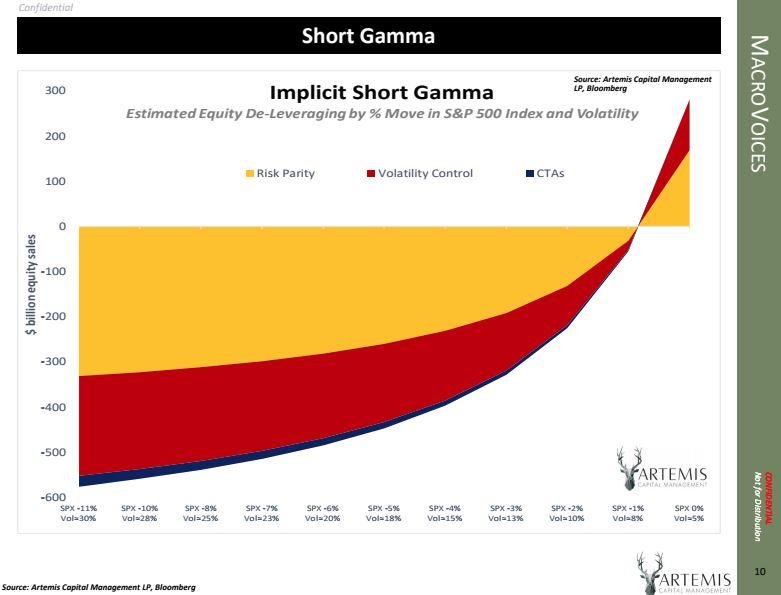 ...and then there's the equity exposure of the CTAs...

...Then, at the bottom of the short-vol pyramid, are corporate buybacks, which have helped prop up the market by BTFDing at every turn. 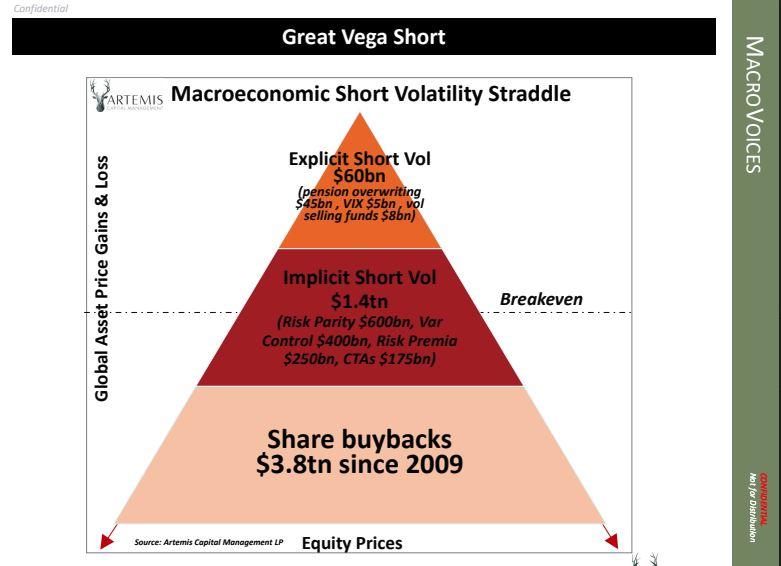 And it makes sense: How else can a CEO directly influence a company's EPS? You can't magically increase sales - there are too many factors that go into that.

But you can pick up the phone and call your broker.

But let’s think about what share buybacks do. If you’re a corporate CEO, you don’t have the ability to generate growth. You can’t generate sales. And you want to get your bonus. So if you can’t generate earnings, if you can’t help your top of the line, what you can do is reduce the number of shares. And this will artificially increase the EPS so you can hit your bonus target.

When you add all of this exposure together, we have this self-reflexive short straddle of financially-engineered strategies in the market. And this really comes out to about $2 trillion worth of implicit and explicit short-volatility strategies. And then you can tack on the share buybacks. To some effect that is resulting in this.

Today, anywhere between 6% and 10% is held in these self-reflexive implicit and explicit short vol strategies.

Infer from that what you will...

Listen to the whole interview below: