Submitted by Mish Shedlock of MishTalk

Want to markup gas by 8 cents a gallon in Wisconsin?

You cannot because 8 cents does not meet the state's minimum markup requirements. The same logic applies to Meijer and Walmart for groceries and school supplies.

The minimum markup laws are a relic from seriously-misguided depression-era laws, still on the books in 26 states.

The Wisconsin price police say Meijer Prices are Illegal and demand the grocery store charge more for all kinds of items.

In Wisconsin, the price police have gone after Meijer, a superstore that sells everything from groceries to electronics to pharmaceuticals. Rivals filed complaints accusing it of pricing 37 items—including bananas, dog food, ice cream and Cheerios—below cost. Meijer, which runs 200 stores in five states, says this was the first time it had ever been accused of hurting consumers by charging too little. Nonetheless, Wisconsin’s Department of Agriculture, Trade and Consumer Protection sent the superstore a letter explaining the requirements of the state’s Unfair Sales Act.

The story is similar for Krist Oil, a family-owned gasoline company with more than 70 locations, mostly in Michigan’s Upper Peninsula and Northern Wisconsin. Krist has the freedom to determine the most competitive price for its gasoline at its stations in Michigan, but it is legally barred from doing so in Wisconsin. Although it wants to lower prices, Krist is forced by the state to charge a markup of no less than 9.18%. The biggest losers are workers in rural Northern Wisconsin, who could benefit from lower gas prices.

The minimum markup law, formally known as the Unfair Sales Act, bans retailers from selling merchandise below cost. The law, originally passed back in 1939, also requires a 9 percent price markup on specific items like alcohol, tobacco and gasoline.

Unfortunately, Wisconsinites are forced to pay for this archaic law that’s still on the books despite ongoing efforts to repeal it. 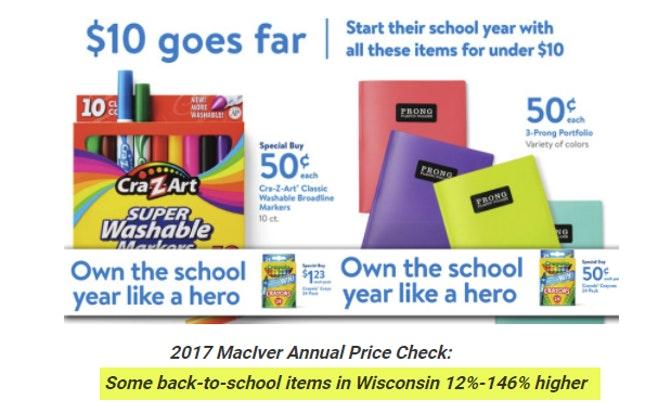 What a disastrous and consumer-unfriendly hoot. Does the Fed want Congress to make a national law requiring prices have to go up 2% a year? I suppose that would be one way for the Fed to hit its absurd 2% inflation target.

Meanwhile, the battle is on. Krist Oil, with the help of attorneys at the Wisconsin Institute for Law and Liberty, has filed a lawsuit currently pending in state court that argues minimum markups arbitrarily and irrationally violate the economic liberty guaranteed by the Wisconsin Constitution. A victory here could be a blueprint for change in other states.

The problem with the approach is the outcome only applies to Wisconsin. Similar challenges would be needed in 25 more states.

From a practical standpoint, the best outcome might be if the state ruled against Krist, then Krist filed a challenge to a higher court which hopefully could make a national ruling, invalidating all such arcane laws in all states.