I've confirmed that the CFTC did subpoena Bitfinex and Tether -- though the subpoena was delivered on December 6, not last week, a source familiar with the matter told me. https://t.co/7dWhKLTwg2

Update 1255ET: Bloomberg reports that U.S. regulators are scrutinizing one of the world’s largest cryptocurrency exchanges as questions mount over a digital token linked to its backers. This follows reports of the company severing its relationship with its auditor.

As Bloomberg details, the U.S. Commodity Futures Trading Commission sent subpoenas last week to virtual-currency venue Bitfinex and Tether, a company that issues a widely traded coin and claims it’s pegged to the dollar, according to a person familiar with the matter, who asked not to be identified discussing private information.

“We routinely receive legal process from law enforcement agents and regulators conducting investigations,” Bitfinex and Tether said Tuesday in an emailed statement. “It is our policy not to comment on any such requests.”

The reaction in cryptos was modest but lower as Bitcoin tumbled below $10k once again... 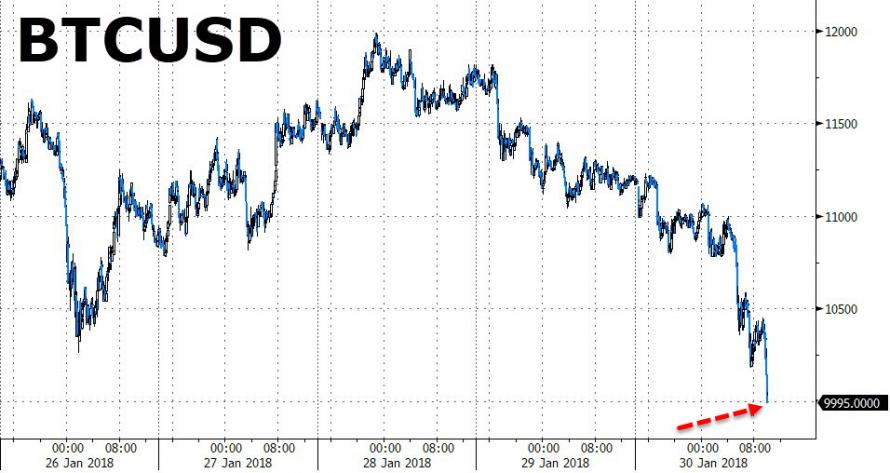 Could Bitfinex, the world's largest, Hong-Kong based cryptocurrency exchange, be headed for a Mt. Gox-style collapse? It's starting to look that way.

As we detailed here, when Mt. Gox first halted customer withdrawals in February 2014, it waited more than two weeks to admit the truth to its customers: that hackers had stolen more than $450 million of their assets, leaving the exchange bankrupt and them holding the bag.  That hack effectively crippled the entire digital currency ecosystem, ushering in a two-year bear market that at one point carried the bitcoin price below $200, from what was then a record high north of $1,200 reached in November 2013.

So when another exchange engages in similarly shady behavior - withholding critical information about customer funds, or failing to produce audited financials despite promising to do so - it should prompt crypto traders to ask themselves why, with dozens, if not hundreds, of cryptocurrency exchanges operating around the world, they're choosing to do business with this one.

That's the question that customers of Bitfinex should be asking nearly two weeks after the exchange, once one of the world's largest, first revealed that it had been cut off from sending outbound dollar-denominated wires to its customers.

Of course, halting customer withdrawals isn't uncommon in the cryptocurrency world: All three of China's largest exchanges suspended customer withdrawals in February. And last year, Kraken, one of the biggest U.S.-based exchanges, suspended withdrawals temporarily because of a glitch in its trading software.  But this freeze is particularly troubling because, like Mt. Gox, Bitfinex inexplicably decided to wait before informing customers of a critical problem. It also has implications that stretch beyond the bitcoin market, to another cryptotoken called tether that was launched by Bitfinex back in January 2015, and has since been dogged by allegations that it's a scam.

The halt is already costing Bitfinex's customers money. On Tuesday, bitcoins were going for $1,547 on Bitfinex's platform, a premium of more than $100 over most of the other popular exchanges. Investors, apparently, feel that eating a 7%-8% loss is preferable to leaving their assets in Bitfinex's care any longer.

Reddit users reported that wire transfers requested as early as March 9 were cancelled, and that the exchange offered only vague excuses as to why. It took the exchange until April 13, after it had filed a lawsuit against Wells Fargo & Co., whose correspondent banking division had effectively shut Bitfinex out of the global financial system, that the exchange disclosed the problem to its customers.

And while Bitfinex has repeatedly said it would make things right - it has promised to either establish a new banking relationship and to allow customers access to other fiat currencies  - only a handful of customers have been able to get their assets out of the exchange.

As part of the freeze, Bitfinex has established a moratorium on cashing in tether tokens held by its customers. These tokens were created by Bitfinex in 2015 to allow customers to exchange an asset that's pegged to the dollar at a one-to-one ratio, allowing them to avoid costly wire transfers that must be processed through the banking system.

But the withdrawal freeze has put pressure on the tether market; for only the second time since they were introduced, investors are selling these tokens at a discount. The price of a single token has been languishing below the $1 level for more than a week.

More troubling still is that Bitfinex has so far refused to provide an audit of the fiat funds that allegedly backstop the tether float, despite promising that it would be "fully transparent and audited to demonstrate 100% reserves at all times" when it first launched the token.

This has lead some to speculate that the exchange could be commingling tether funds with other customer assets.

While evidence of this could cause irreparable damage to Bitfinex's reputation, leading to a wave of withdrawals that could add further strain to its already thinning bitcoin reserves, as Twitter user @Bitfinexed points out, it's not technically a violation of the tether terms of service.

Given the preponderance of scams in the cryptocurrency market, investors who haven't already, should probably take what's left of their money and run, if they can of course.

Having bounced back from the Coincheck-hack crash, cryptocurrencies are extending yesterday's ugliness today and accelerating to the downside... 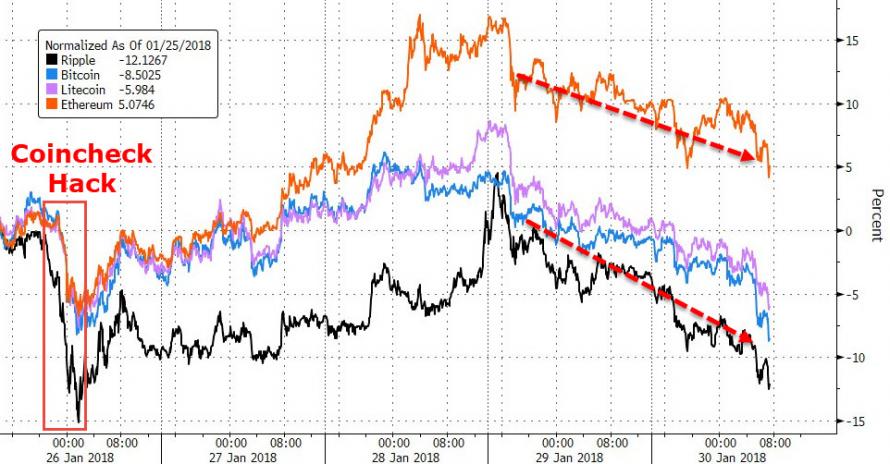 Bitcoin is back below the Coincheck crash lows... 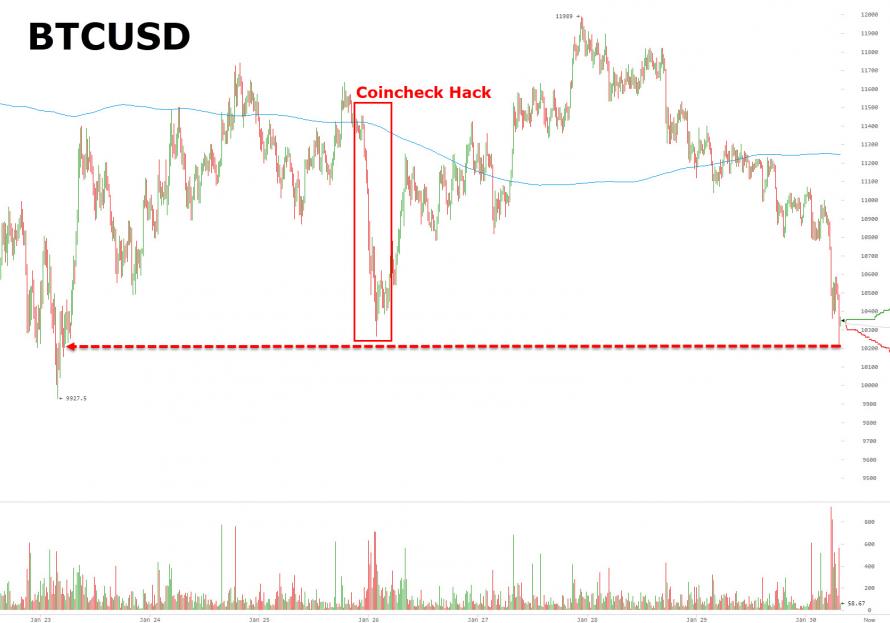 There are no clear catalysts for this drop.

Deutsche Bank  executives have suggested that “governance” that will legitimize crypto investments could exist in “five to ten years.”

Originally speaking in an interview with Bloomberg on Monday, Jan. 29, Mueller cautioned against current investment in cryptocurrency as only for those “who invest speculatively” while appealing for businesses in the sphere to work together with regulators.

“Once security and the corresponding trust have been created, cryptocurrencies can be assessed and evaluated like established asset classes,” he forecast.

“It’s possible that the required governance will be in existence in five to ten years.”

Deutsche Bank has traditionally taken a bearish view on cryptocurrencies as prices rise, cautioning in December that a major fall in Bitcoin was being “discounted as a small issue” by financial markets.

The lack of volatility in traditional stocks was driving investor interest in more risky assets such as Bitcoin, fellow Deutsche Bank analyst Masao Muraki determined in a note mid-January.

“Now, a growing number of institutional investors are watching cryptocurrencies as the frontier of risk-taking to evaluate the sustainability of asset prices,” he wrote.

Germany continues to fall behind in its treatment of cryptocurrencies at consumer level, providing a stark contrast to initiatives in other countries, such as neighboring Switzerland.

Earlier this month, the country’s central bank director nonetheless precluded comments from UK and US lawmakers at the World Economic Forum 2018 that regulation of cryptocurrency should be a joint international effort.

*  *  *
As a reminder this early-year weakness in crypto is not unusual... 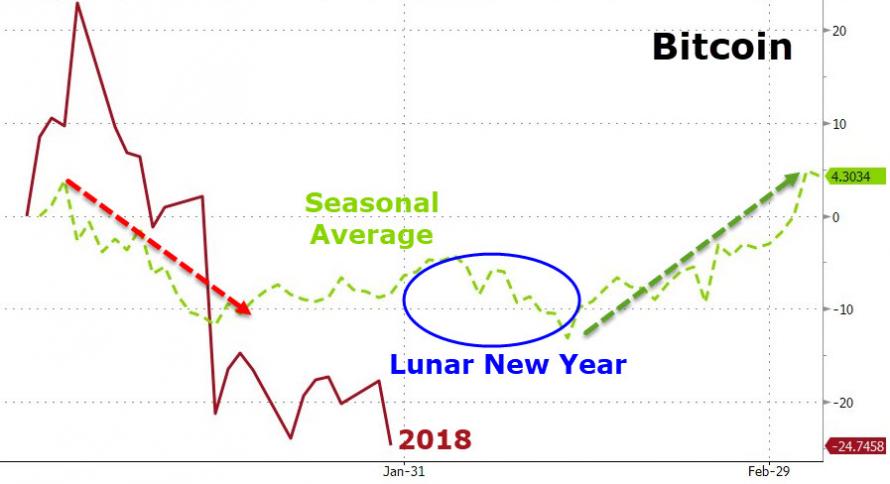 As CoinTelegraph notes, the lead up to Chinese New Year is one of high spending as people book all sorts of travel and holidays, not to mention buy presents. Thus, just like Christmas and December is a time for spending in the West, January has a similar pattern in the east.

With Bitcoin’s value almost halving from $20,000 in the middle of December to $10,000 at its worst in January, Wallin is both unperturbed or surprised.

“The January drop is a recurring theme in cryptocurrencies as people celebrating the Chinese New Year, aka Lunar New Year, exchange their crypto for fiat currency,” explains Alexander Wallin, CEO of trading social network SprinkleBit, as quoted by Bloomberg.

“The timing is about four to six weeks before the lunar year when most people make their travel arrangements and start buying presents,” he added.

The holiday takes place on Feb. 16; however, the build-up is where people start to spend their money. And with the Chinese population heavily vested in Bitcoin, it has a huge role to play on the movement of the market.

The thoughts are that people have been taking their profits into the build-up of the New Year, turning their Bitcoin into fiat currency to use for gift buying.