Earlier this month, we reported that a Russian businessman had purchased two vacant power stations in the Perm region with the intention of setting up a large crypto mining operation - the latest sign that miners are moving to fill the void left by China's crackdown on cryptocurrency miners, who had previously enjoyed heavily subsidized power.

As for North America, we've already noted that miners are clustering in Winnipeg City, Manitoba, the town with the cheapest electricity on the whole continent.

And now, a mysterious new industrial scale cryptocurrency project is coming to Nevada: As the Nevada Independent reports, a little-known company focused on blockchain technology and bitcoin has purchased a huge chunk of land at the Tahoe-Reno Industrial Center. 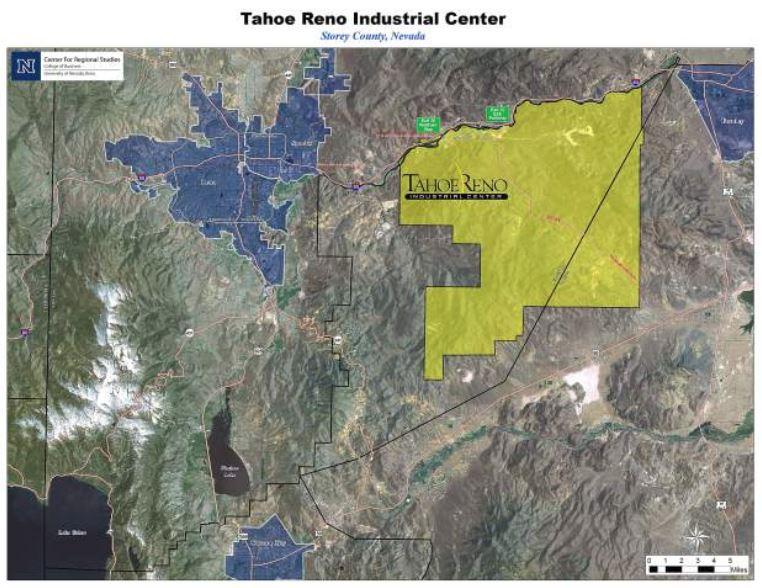 The park has managed to attract dozens of tech firms, including several notable names. Back in 2014, it made headlines when Tesla selected the park as the site for its Gigafactory. Google and Switch also have campuses there.

All told, Blockchains bought 74,000 acres for $175 million - the largest deal since the park was developed in 1998, and more than the Gigafactory and the other corporate campuses.

A little-known company focused on the underlying technology behind cryptocurrencies such as Bitcoin has purchased a huge chunk of land at a Northern Nevada industrial park.

Storey County Commissioner and Tahoe-Reno Industrial Center broker Lance Gilman said he closed escrow last week on the sale of 67,125 total acres of land to Blockchains, LLC, a business that studies and develops applications for blockchain distributed ledger technology, the decentralized platform that makes up the backbone of Bitcoin and other cryptocurrencies

Though Gilman said he was prohibited from discussing terms of the sale, which is expected, he said that total value of the 74,000 acres in land sales closed this month at the park, including the sale to Blockchains, was worth about $175 million.

“There’s no question — they’re going to have a major footprint in the Tahoe-Reno Industrial Center,” he said.

But little information is publicly available about the company or its intentions, though Gilman says they now own more than 104 square miles at the industrial park. The land sale was first reported by Nevada Newsmakers.

According to the company’s website, which provides only a vague description of what the company does, Blockchains, LLC is a “premier innovator” in the blockchain industry, specializing in “financial services, software development of distributed applications (Dapps) for the Ethereum blockchain.”

But Lance Gilman, the real-estate agent who sold the plot to Blockchains, said he was unable to provide details about the company's plans, saying only that he believes they'll be building a corporate headquarters and a research lab. He said the company said it will release more information soon.

But given the association with cutting-edge tech that the park's developers have nurtured, Gilman said he's "proud" to have a cutting edge blockchain company in the park.

Gilman told Nevada NewsMakers "I believe they envision a product that will showcase all of the capabilities of the block chain technology."

Gilman said that he and his partner believed it would take generations to sell all of the land in the park. But thanks to interest from a slew of tech companies, they managed to do it in less than 20 years. The park only has 250 acres of land left for sale, according to Nevada Newsmakers.

While the details are still fuzzy, one could be excused for suspecting that the company intends to build a lavish campus. As Newsmakers reported, the park's owners believe Blockchains's plans will "mesh perfectly" with the "Emerald City" concept the developers are planning: That project involves a lake in the middle of a 500-acre town center that would double as a holding reservoir for treated water to be used by the park's residents.

Blockchains, LLC was registered in Nevada in May 2017 by California attorney Jeffrey Berns, a partner at the law firm of Berns Weiss LLP. According to his LinkedIn, Berns has been the president of “Berns Inc.,” which owns the URL Blockchains.com, and states that the company’s plan is to “stay in a somewhat of a stealth mode until approximately second quarter 2018.”

In addition to virtual currencies, Berns Weiss LLP focuses on class-action lawsuits against financial services companies, and has won millions of dollars in settlements against the likes of Ticketmaster, Cisco Systems and Home Loan Center.

Tesla, one of the anchor tenants at the park with its lithium ion battery production “Gigafactory,” owns slightly more than 2,800 acres at the park. Google purchased 1,210 acres at the park last year, and data center giant Switch operates a 2,000 acre campus at the park, which covers over 107,000 acres in rural Storey County.