Betting On A Hawkish Farewell Party By Yellen? Not So Fast

When two days ago we previewed  Yellen's "swan song" FOMC meeting, which concludes at 2pm ET today, and launches Janet Yellen's retirement, we observed that according to most sellside analysts, she is expected to send a distinctly more hawkish signal than in December, "by observing a more upbeat economic assessment and higher inflation measures", an outcome which could send short-dated yields spiking, lead to further curve flattening, and as for what it does to the beaten down dollar is anyone's guess, especially if a determined hawkish bias by the Fed is seen as an accelerant to the next US recession.

Or maybe not. According to Citi's former chief FX strategist Steven Englander, currently at Rafiki Capital, the Fed does not see a particular reason to send any message today, "when there is ambiguity over whether it is a Yellen or Powell Statement, and without a press conference to explain the context of the changes."

So I lean to the minimum needed to reflect improved economic conditions and firming of inflation expectations.

Given how rates have moved in recent weeks, Englander believes that this may come across as slightly dovish, which would be a change to the prevailing market sentiment, which as described previously is leaning hawkish and may explain the selloff over the past two days.

Meanwhile, as we discussed on Monday, market expectations are for upgrades on the language in activity and inflation, unwinding the Hurricane references and removing some of the language that could be viewed as referencing downside risk. This is more hawkish than the previous statement, but 2Yr yields have moved 30bps since after the December FOMC, so that kind of updating is already priced in, if perhaps not by equities. Also worth noting: while the market expects no action today, the March FOMC is about 85% priced in so according to Englander, "there is no pressing need to adjust market expectations in a hawkish direction."

What should traders keep an eye on to determine if the Fed is turning hawkish... or not? According to Englander, the key issue will be how they characterize inflation and inflation expectations. The paragraph 1 text from the December Statement:

"On a 12-month basis, both overall inflation and inflation for items other than food and energy have declined this year and are running below 2 percent. Market-based measures of inflation compensation remain low; survey-based measures of longer-term inflation expectations are little changed, on balance."

" inflation and inflation expectations have bounced a back a bit, but remain below 2 percent on a 12-month basis"

"Readings on inflation and inflation expectations have rebounded towards the target although on a 12-month basis they remain below 2 percent."

The distinction is whether you make a point of saying inflation remains below target or whether there is an implication that the targets are being approached. Their problem is whether to look at 6-month annualized core PCE deflator growth (blue) which has rebounded smartly and is just over 1.7% annualized, or the 12 month (red) which shows a more shallow increase. 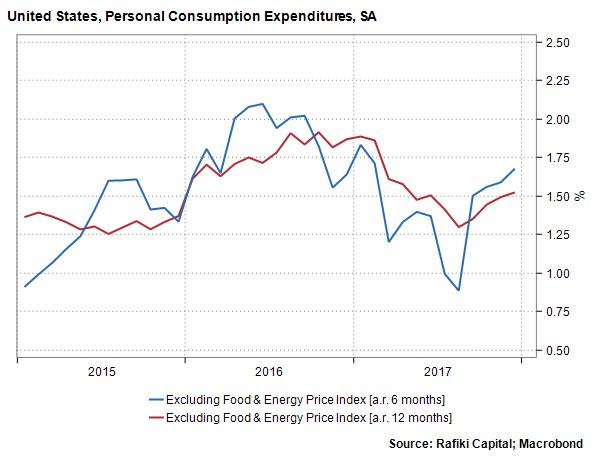 Englander here thinks they are worried about the blue line but see the March meeting as the better opportunity to discuss any changes to the speed with which they forecast an approach to 2%. In addition they still have to thrash out whether they want to aim for 2% or feel that a temporary overshoot is preferable.

The macro strategist's bottom line: "they do the minimum and the minimum is slightly dovish given current market pricing."

Meanwhile, for those readers who disagree, and think Yellen will take the opportunity to take the hawkish exit in her final meeting, here is what Goldman believes the Fed's statement will look like, redlined to December:

Information received since the Federal Open Market Committee met in November December indicates that the labor market has continued to strengthen and that economic activity has been rising at a solid rate. Averaging through hurricane-related fluctuations, job Job gains have been solid, and the unemployment rate declined further remained low. Household spending has been expanding at a moderate rate strengthened, and growth in business fixed investment has picked up in recent quarters. On a 12-month basis, both overall inflation and inflation for items other than food and energy have declined this year and are running below 2 percent. Market-based measures of inflation compensation have risen recently but remain somewhat low; survey-based measures of longer-term inflation expectations are little changed, on balance.

Consistent with its statutory mandate, the Committee seeks to foster maximum employment and price stability. Hurricane-related disruptions and rebuilding have affected economic activity, employment, and inflation in recent months but have not materially altered the outlook for the national economy. Consequently, the Committee continues to expect that, with gradual adjustments in the stance of monetary policy, economic activity will expand at a moderate pace and labor market conditions will remain strong. Inflation on a 12‑month basis is expected to remain somewhat below 2 percent in the near term but to stabilize around the Committee's 2 percent objective over the medium term. Near-term risks to the economic outlook appear roughly balanced, but the Committee is monitoring inflation developments closely.