“There is no dark side of the moon. As a matter of fact, its all dark… ”

Regular readers will know I have an abiding interest in the stars – half-a-dozen apps on my phones, binoculars and telescopes in the London Bunker and Blain Manor down south. It’s a rational and fascinating topic. However, I am approaching tonight’s Super-Blue-Blood-Moon with some trepidation. I’ve an aunt who is a wiccan priestess, and I often wonder if there is something in mythology linking the affairs of men to the moon. Science has found many cases where lunar cycles influence life. Lunacy abounds around full moons.. Should we be going long pitchforks and torches? 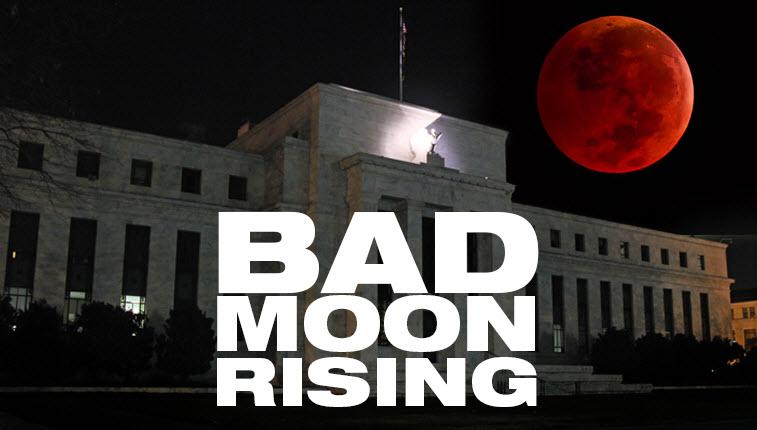 Tonight’s conjunction of Lunar events is rare but predictable – but what if there is something in it? Astrology was a whole science based upon the moon and starts. Lunar eclipses are common, but seldom in conjunction with the Moon’s closest approach to earth and two full Moons in a month. Life on Earth would not exist without the Moon’s gravity driving tectonics and tides. Just saying….

What if the minor wobbles across stock markets this week are driven by some deep-rooted genetic ancestral fear of the skies? Absolute nonsense of course.. but stranger things abound…

Perhaps its better to remember that old stock market truth: there are 27 doors leading on to the floor of the New York Stock Exchange, but only one exit.

Last night I was fortunate enough to attend a Livery Dinner in the city as guest of a marvelous young lady who, in a few years, will become Master of the Worshipful Company of Actuaries. While the Actuaries might not be the oldest of the City Guilds – they embrace all the traditions with gusto! They also tend to be smarter than the average accountant. Despite what you might have heard, there are few good jokes about Actuaries – and they’ve heard them too many times.

Neither are they just statisticians working out mortality rates. Julie is Chief Risk Officer of a major UK institutional Investor – managing and quantifying risk across the book. Talking to other members and guests, it became clear the actuaries realize just how risk vs returns are massively out of synch… time to wonder about valuations in general! However, I was a tad concerned when one risk manager told me his solution was to switch into liquid instruments – Whoa! When/if the solids hit the fan, then the liquidity myth is very quickly exposed!

What about the stock markets? My Stock Watcher Steve Previs thinks Bull Confidence has been bruised, but not broken. The last few sessions are an indication of what might happen – and stock’s parabolic upside was getting a tad weird!

Last two days we’ve seen selling in ETFs triggering blue chip sales – an important issue to consider in terms of indexed plays investing in stocks on a passive basis. And Vix now in the mid-teens has got folk thinking. The oil slide added an element of sector flavour to the micro-crash. Sentiment indicators swung for greed to neutral and now cautious. Meanwhile, the “sell-off” was hardly the End of the World. We’re not even down 2%!

Its more likely this flip down isn’t the end of the Bull Cycle. But caution is advised..

What else to think about this morning? Trump's State of the Union? It was what is was… Get over it. Yellen? Likely to bless us all with no surprises.